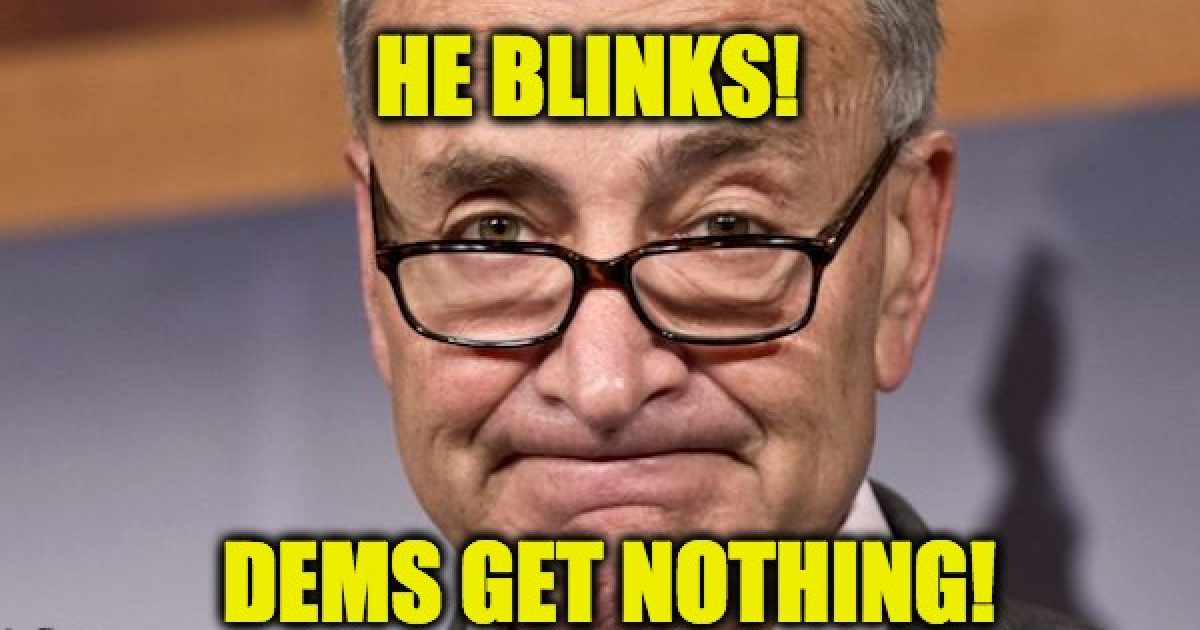 Sen. Schumer can deny it all he wants (he’s good at lying) but the real truth is that he blinked. Perhaps it was the polls showing Americans were blaming him, or perhaps it was pressure from his members running for reelection, or perhaps someone pushed his glasses up to where they should be and Schumer realized he was in the wrong, but in the end, the senator gave in.

That’s not just my opinion but the opinion of the liberal skewed media:

Not sure I understand the point of the last three days.

Can someone clearly state what exactly Chuck Schumer extracted from McConnell by shutting down the government?

If this thing passes at noon, WOW. Democrats got nothing in this. Can someone please remind me why this happened to begin with? Wasn’t it abt a DACA deal? There is no DACA deal

Democrats have managed to accede to Republican demands, demoralize their energized base, give a disengaged president a win, and look like they held a meaningless three day government shutdown — all at once.

Pretty weak outcome for the Democrats — they couldn’t get a summit meeting with Trump/GOP leaders or promise to attach DACA fix to a must-pass bill — but they were worried about the lack of a clear endgame and McConnell wasn’t budging on concessions.

If this was always Senate Democrats’ exit strategy – cave in exchange for nothing – they should have just provided the 8 votes on Friday.

Was fairly predictable that Dems would get rolled. They didn’t have a much of a bargaining position.

BUT…. This does actually set them up a bit better for February

I wonder if Dems understand how much of their base will be demoralized by accepting this deal.