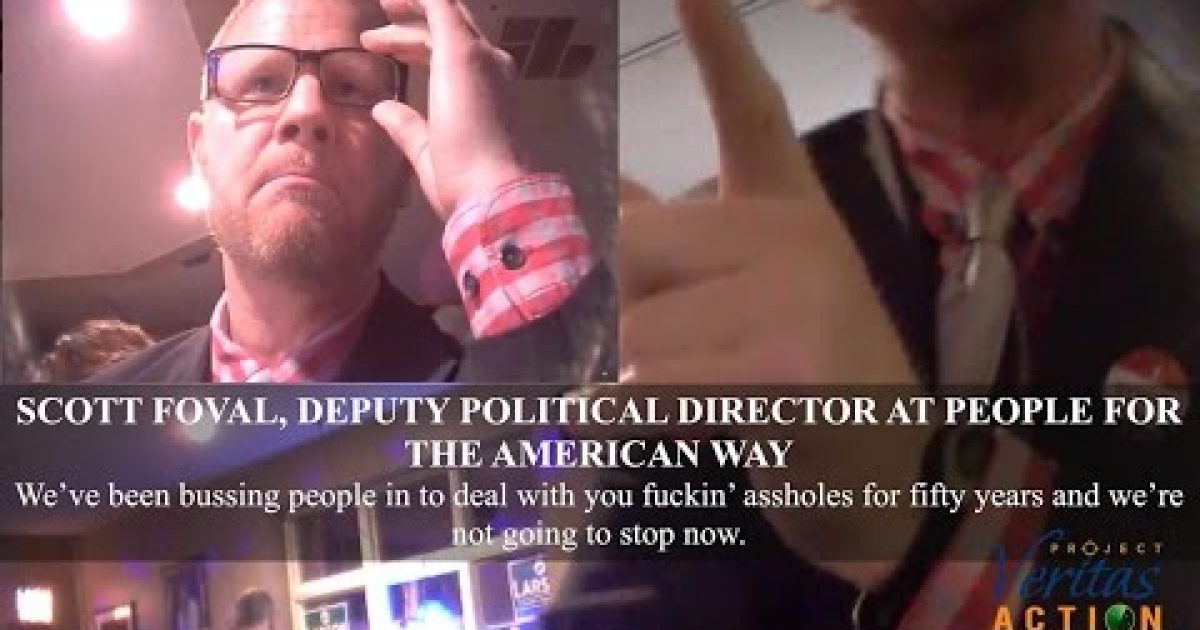 Project Veritas Action has released the second video in a multi-part series that is sending shockwaves through the DNC and the Clinton campaign. The first video explained the dark secrets and the hidden connections and organizations the Hillary Campaign uses to incite violence at Trump rallies. This latest video takes the investigation even further.

Like Monday’s video this one features Democratic operatives Robert Creamer and his colleague Scott Foval, (who lost his job at the leftwing advocacy group Americans United for Change after the first video was released). At the time the video was taken Foval “worked for People for the American Way, an organization funded in large part by George Soros.”

Several Project Veritas Action undercover journalists catch Scott Foval, the National Field Director for Americans United for Change, saying, “we’ve been bussing people in to deal with you f**kin’ assholes [Republicans] for fifty years and we’re not going to stop now, we’re just going to find a different way to do it.”

Foval then goes on to explain the sinister plot and how they avoid getting caught. The undercover reporter asks why they can’t just “bus in” voters, but get them to use their own personal vehicles. Foval describes how they avoid being detected and free of criminal charges. “Would they charge each individual of voter fraud? Or are they going to go after the facilitator for conspiracy, which they could prove? It’s one thing if all these people drive up in their personal cars. If there’s a bus involved? That changes the dynamic.”

How do they keep it a secret from the American people and the FEC? Foval explains, “So you use shells. Use shell companies.”

Tuesday’s  video captures Foval and the Project Veritas undercover reporter brainstorming about the voter fraud scheme, Creamer seemed to hesitate to help the “donor” pull off the voter fraud scheme that Foval created.  However, Foval explains that “officially” Creamer doesn’t want to know about it, but will help execute the plan.

Foval also sent the Project Veritas “donor” in touch with another leftwing operative who was more than willing to willing to participate in the voter fraud scheme, Cesar Vargas, attorney and Criminally Trespassing Alien.

The final straw is Foval and the Democrats don’t think journalists, the media or the law can do anything to stop him.   “The question is, whether when you get caught by a reporter, does that matter? Because does it turn into an investigation or not? In this case, this state, the answer is no, because they don’t have any power to do anything.”

Foval thinks we don’t have the power to stop him and the shady and corrupt tactics of the Democrats to rig this election.

Indeed when Donald Trump explained that the election can be rigged the mainstream media tried to make him out to be a fool.  Watch the video below and then judge who the fools really are: