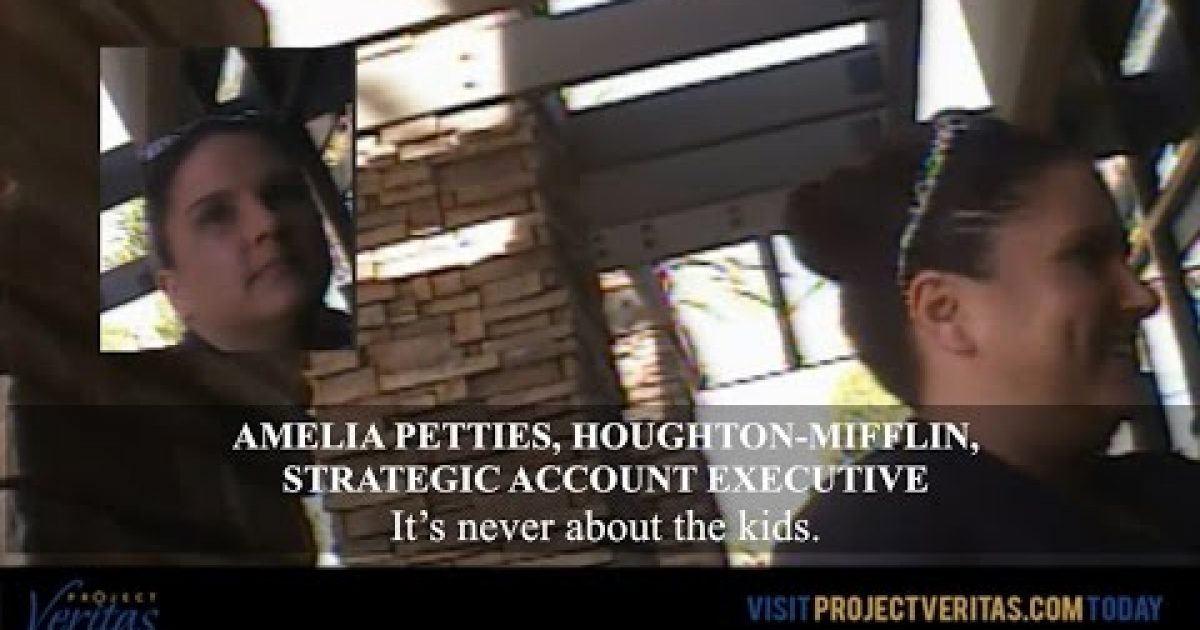 The intrepid investigators at Project Veritas have released another video exposing a publishing executive explaining the real reason for Common Core—profit!

This time it is another sales rep from book publisher Houghton-Mifflin Harcourt Strategic Account Executive, Amelia Petties secretly taped. She reveals that Common Core is “never about the kids.”

Ms. Petties also revealed that Common Core has been a gold mine for the textbook publishing companies, saying, “There’s always money in it.”

She believes if the get rid of the name Common Core which has bad conations publishers can grab even more cash.

“And slapping a new name on it, which in my case, I hope they do…Let’s do it…I can sell a shit ton of training around whatever you’re calling it.”

By the way I checked Google who referred me to the urban dictionary apparently, a shit ton (or shit-ton) is a “Widely adaptable large unit of measure. Generally speaking, take an amount of something that an average person may have and add a shitload more to it. This results in a shit-ton.”

Veritas also interviewed some teachers in the video below.

“Common Core, just another fad. I mean it’s the same stuff we have been teaching forever, they just packaged it different. Sparked it up, put some glitter on it and it is now the Common Core,” stated Katrina Myers, a teacher in Klamath Falls, OR.

“That’s another money making machine,” a Colorado teacher confirmed in the video, talking about Common Core.

Same shit-ton different day? Yet states and school districts all around the country are wasting money, changing curricula to ensure that every single student in every Common Core state are taught the exact same thing the exact same way.

“Our videos will continue to expose how the book publishers are all about the money with no regard for the actual needs of our children,” said Project Veritas President James O’Keefe.

Beyond that common core take a the local information and values which are supposed to be part of each district’s program. Education is a local school district and state responsibility. Common Core turns education into a “vanilla” commodity (except for the math program which turns it into a torture chamber).

“Corporate cronyism and underhanded political deals have contributed to Common Core’s massive disruption and the unraveling of America’s educational fabric, and it is no longer a secret thanks to our undercover videos. In upcoming videos in this series we will show more abuse of taxpayer dollars and how major textbook publishing companies are enriching themselves at the expense of children. Just as Pearson and Houghton-Mifflin responded to our first video, they will be forced to respond to what’s coming next,” concluded O’Keefe.