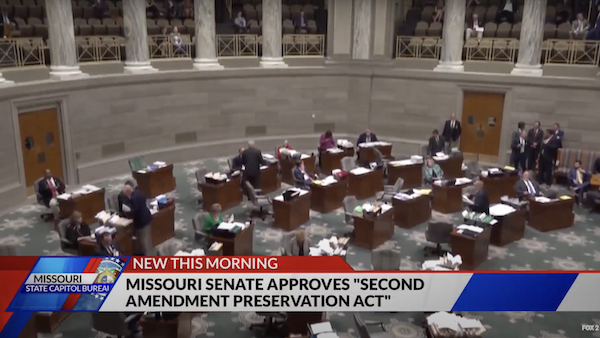 For the last 5 years, the Missouri Senate has unsuccessfully attempted to pass legislation to nullify federal anti-gun actions. With the rhetoric coming out of the White House, this time the Missouri Senate passed a bill. As reported in January it was introduced by Sen. Eric Burlison (R-Battlefield). The vote to pass the “Second Amendment Preservation Act” this past Thursday night was strictly along party lines: 22 Republicans for and 10 Democrats against. The Second Amendment Preservation Act now will head to the Missouri House.

As explained by Senator Burlison, “We’re not eliminating federal firearms laws in Missouri. We’re just simply saying we’re not going to lift a finger to enforce their rules.”

Previous attempts have “gone nowhere fast.” When Senator Burlison introduced his bill in January, supporters did everything they could to press the legislature to pass it. The “Second Amendment Preservation Act” still must get through the Missouri House in order to get to the Governor’s desk.

Per the Kansas City Star:

Restrictions that would be “invalid” include laws that require fees, registration or tracking of guns, or laws prohibiting certain people from possessing a gun. The bill would bar local police from assisting federal agents in enforcing those laws and prohibit them from hiring former federal agents who had enforced them. There would be exceptions for cases in which the federal agents are enforcing gun restrictions that also exist in Missouri law.

Republicans pursued the measure with renewed vigor this year after the election of Democratic President Joe Biden, who has issued executive orders on gun control. Arizona passed a similar bill this year and the proposal has been pursued in about a dozen states.

The presidential orders include tighter regulation of homemade “ghost guns,” which lack serial numbers, and a device that allows a pistol to operate more like a rifle. The Biden administration also is encouraging states to adopt “red flag” laws that allow families or police to ask judges to temporarily confiscate guns from people who demonstrate “extreme risks” to themselves or others.

The House could vote to send the legislation to Governor Mike Parson’s desk by the end of the legislative session at 6pm on Friday. Will it finally pass?