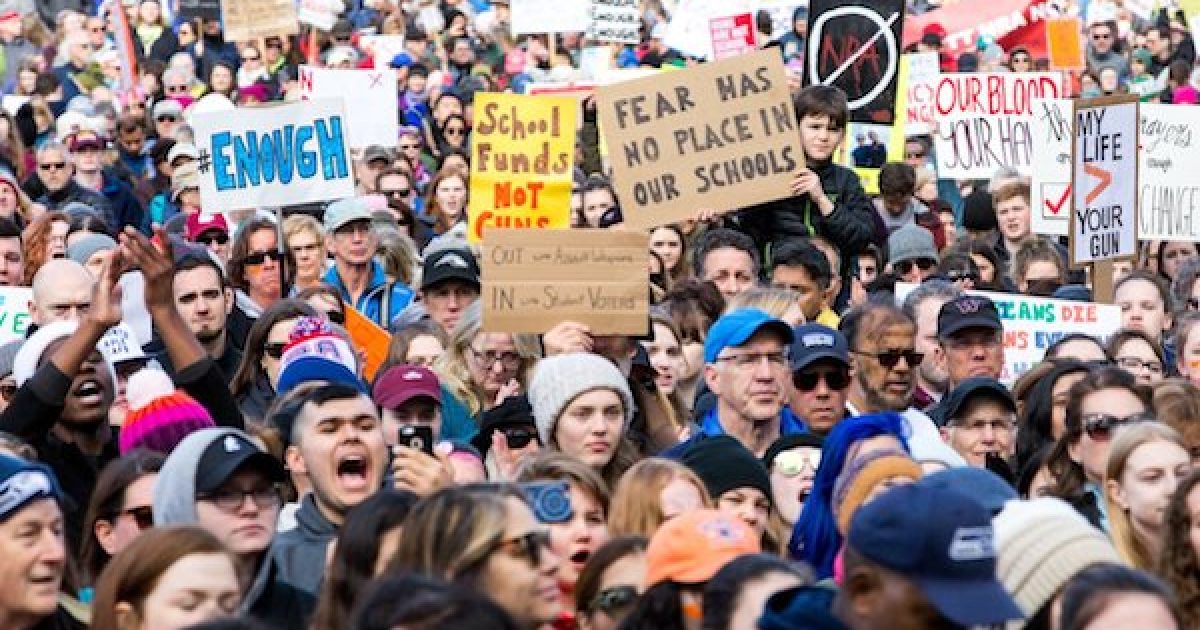 As with most things liberals do, they claim that they are being “inclusive” when they really aren’t and the so-called “March For Our Lives” was a perfect example of this. Also, as with most things liberals do, the whole raison d’etre is based on lies, second amendment lies, and the weekend’s march was filled to the brim with that, too. Then there is the violent rhetoric and hate for all things they disagree with. In all, this so-called march was just another example of left-hate at its worst.

First of all, this rally was far from merely a rally to talk about gun laws. It also became a massive Democrat Party voter registration drive.

According to Breitbart News: “One woman registering voters told Breitbart News that 500 volunteers were in the crowd on Saturday to sign up protesters.”

BuzzFeed also spoke to some of the groups supporting the march:

A spokesperson for Giffords told BuzzFeed News that it is “lending support in any way the students need, especially helping to operationalize these marches from logistics to programming.”

“We applaud these students for demonstrating incredible leadership and demanding that our lawmakers do more to help protect Americans from gun violence,” the Giffords spokesperson said in the BuzzFeed News report.

Far from focusing on gun laws, this so-called march was just a smoke screen to enlarge the Democrat Party… which, by the way, has failed to pass any new gun laws.

To get to the truth about who is really behind this event, all one need do is follow the money. And if we do that we’ll see one hardcore, left-wing, anti-American group after another is footing the bills for these “kids.”

As Freedom Outpost noted, a long list of far-left groups opened their checkbooks for this.

First of all, someone helped the march set up a formal organization to run whatever it will do from here on out.

“The March for Our Lives Fund is incorporated as a 501(c)(4). Donations to 501(c)(4) groups are not tax- deductible. And they don’t have to disclose donors. That’s why they’re a great dark money conduit,” Freedom Outpost reported.

Along with the help of the virulent anti-Second Amendment group Everytown for Gun Safety, this new organization has set up offices in half a dozen cities across America — none of which are in Florida, oddly enough. The Freedom Outpost piece goes on to list a number of the people who sit in the inner offices of these outlets including Deena Katz, who is “a co-executive director of the Women’s March Los Angeles Foundation” and also a “former Dancing With the Stars and current Bill Maher producer.”

Another person working behind the scenes is Aileen Adams, UCLA’s former Vice Provost for Strategic Alliances. And then there is Nina Vinik, an operative at the left-wing Joyce Foundation. So, the march is staffed with Hollywoodites, members of the mis-education establishment, and the liberal charitable foundation set.

Naturally, with all these hardcore left-wingers behind the wheel for this march, about all we got on Saturday were lies, hate, BS, and demagoguery.

As far as protecting the lives of students is concerned — which is, ostensibly, the entire point — the march organizers were uninterested in an open conversation about what might actually be effective.

The speakers demanded legislation, but there was no more legislation to pass — at least, no legislation that would ever survive the Supreme Court. Many of the marchers simply want to repeal the Second Amendment. There was little room for discussion of reasonable proposals.

These are further signs that the marches are largely about mobilizing support for the Democratic Party in the 2018 midterm elections. The speakers made little effort to hide that fact. They called for national unity — against the Republican Party.

The moralizing and lecturing from these manipulated teens has gone roughly as far as it will go. David Hogg doesn’t believe it of course. Hence his continued threats towards legislators in this election cycle promising to oust those who do “nothing.”

Catch Hogg in a more intimate setting (like the video that went viral late this week) and you see a much less measured maniac, cursing vulgarity with hubris unchecked basically advocating that teens shouldn’t just be in charge of gun policy, but even control of all internet devices. Because… parents are stupid. (Marxist much?)

Never mind that the March offered no concrete plan to make our schools safe. It couldn’t. That would require a focus on the actual schools, their current security set-ups, and asking questions like, “In the side by side of two school shootings in Florida and Maryland, why were the outcomes so different?”

Instead Hogg and his belligerent band of media hyped know-nothings spout their misunderstood self-researched “facts,” lead chants of “enough is enough,” and then play the untouchables when someone calls them on their inaccuracies.

It is not a “personal attack” on these kids to say that they are “misinformed, arrogant, and misguided.” It’s a statement of fact. And the moment they accepted a litany of interviews for CNN their ideas became fair game.

Another galling point about these kids is the wonderful arm patch that Parkland student Emma Gonzalez was wearing as she spoke from the dais from the D.C stage. As she stood there railing against our constitutional rights, Miss Gonzalez wore the flag of oppressive, Communist Cuba on her sleeve! So, we are supposed to listen to this kid who is showing support for an oppressive regime that jails and murders its political opposition?

This is the left’s new hero?

But, I have a further point about these kids that shows the lack of logic to their liberal position. These kids and their bankrollers are floating the rather new idea that guns should not be sold to anyone under 21 years of age. But, wait… we are supposed to sit here and accept the idea that these kids are all smart enough and mature enough that we should take direction from them for all our gun laws, yet they are also saying that kids their age are too immature and irresponsible to buy and own guns? How can that that make any sense? How can they be smart enough to direct our political fortunes but so unstable that we can’t trust them to exercise their Constitutional rights?

Perhaps it isn’t surprising that this event wasn’t filled with a lot of logical focus. Indeed, few of those in attendance had any idea what they were talking about. The folks from Campus Reform, for instance, took their cameras to the march in Washington DC, but when they asked marchers what an assault rifle was, none of them could define what that term even meant.

Time and again the Campus Reform host asked marchers what an assault weapon was and none of them had the first clue. But even as they hadn’t a clue what they were talking about, they were 100 percent sure that they wanted them banned. How can you oppose something when you don’t even know what it is?

But, not everything, went the left’s way this weekend.

One good thing, such as it is, is the fact that march organizers were expecting no less then four or five hundred thousand if not a million marchers. But all they ended up with was 200,000. That is still a lot, but far from what they expected.

The marchers also proved that the left is filled with filthy pigs.

Unsurprisingly, once the marchers left D.C. they also left thousands of tons of garbage behind. The streets of Washington were literally knee deep in garbage thanks to these liberals. Signs, food, papers, tons of garbage was left everywhere. We see this every time liberals descend on a city. Not only do liberals sully our nation in a figurative sense, they do so in a literal sense.

In the end, this whole march was a sham. Period.

Before I close, I’d like to offer a video that might help you in your own debates with the anti-American left. A great video from “MAGA Midge” shows a group of actors who thought they were auditioning for a PSA spot about guns. But, when they performed their readings they were shocked by the REAL gun facts they were seeing on the paper in front of them. You can see that they are utterly confused because it doesn’t fit with the lies liberals tell about guns.