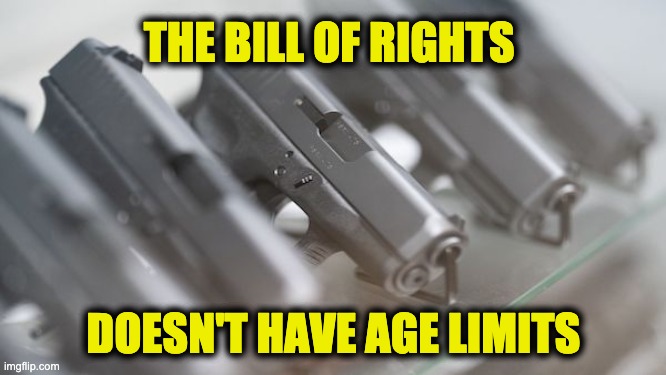 A three-judge panel of the Fourth Circuit Court of Appeals ruled that the law restricting the ability of 18-20-year-olds from purchasing a firearm is unconstitutional. What now? The case will go to the full bank of judges, then wind its way to the Supreme Court–well maybe.

The case the Fourth Circuit ruled on was Hirschfeld v. Bureau of Alcohol, Tobacco, Firearms & Explosives. Tanner Hirschfield turned 21 while the case was in litigation, so his claim became moot.  Even though her name wasn’t in the title of the case, it was also filed on behalf of Natalia Marshall, who is still in the disputed age group.

The court’s ruling explains the background of her case:

Nineteen-year-old Natalia Marshall had good reason to seek protection. She had been forced to obtain a protective order against her abusive ex-boyfriend who, since the issuance of the order, had been arrested for unlawful possession of a firearm and controlled substances. He was released on bail but never came to court, leading to the issuance of a capias for his arrest. Along with the threat from her ex-boyfriend, Marshall works as an equestrian trainer, often finding herself in remote rural areas where she interacts with unfamiliar people. Having grown up training with guns, she believes that a handgun’s ease of carrying, training, and use makes it the most effective tool for her protection from these and other risks. But because Marshall was 18 when she tried to buy a handgun, a federal law prevented her from buying from a licensed dealer who would perform a background check to verify that she was not a felon or other prohibited person. She preferred using a licensed dealer because they tend to have a wider supply, a good reputation, and a guarantee that the guns have not been used, stolen, or tampered with. She is now 19 and remains unable to buy a handgun from a federally licensed dealer for self-defense

According to the decision, the plaintiffs sought “an injunction and a declaratory judgment that several federal laws and regulations that prevent federally licensed gun dealers from selling handguns to any 18-, 19-, or 20-year-old violate the Second Amendment.”

The case was rejected at the district court level, which sided with the defendants and dismissed the case. But the court of appeals rejected that rejection. Per the Judges’ ruling:

History makes clear that 18- to 20-year-olds were understood to fall under the Second Amendment’s protections. Those over 18 were universally required to be part of the militia near the ratification, proving that they were considered part of ‘the people’ who enjoyed Second Amendment rights, and most other constitutional rights apply to this age group. And Congress may not restrict the rights of an entire group of law-abiding adults because a minuscule portion of that group commits a disproportionate amount of gun violence. Congress’s failure to connect handgun purchases from licensed dealers to youth gun violence only serves to highlight the law’s ‘unduly tenuous ‘fit’ with the government’s substantial interests. Eighteen- to twenty-year-olds have Second Amendment rights, and the challenged laws impermissibly burden those rights.”

If the full bank of Fourth Circuit Court of Appeals judges reverses this ruling, it will continue a problem for youth who wish to protect themselves. 18-20-year-olds are legal adults in this country. The anti-gun lobby is hard at work to stop the ruling. You can count on it. The court remanded the case for ”further proceedings.”

Will the case find its way to the Supreme Court?  It will get to the court’s front door,  but it’s a coin flip as to whether the court will hear the case. It’s an issue the court should hear and rule on.  However, the Chief Justice of the SCOTUS is John Roberts—a coward who is more concerned about his image and the image of the court than protecting the constitution, so your guess is as good as mine.