Sean Spicer Explains his Complicated Job to the Press [VIDEO] 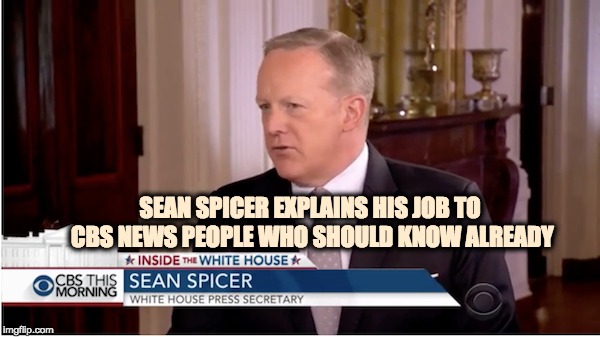 White House press secretary Sean Spicer has a difficult job, and I’d say he does it very well. Part of his job is to make the President look good to the press, no matter what the President has said or done. Even if he wanted to, he couldn’t stand up at the podium and slam the President without getting himself fired.

So, while the press will sometimes try to point out inconsistencies or improprieties with the President – though the press may have a point in some cases – the White House spokesman is not going to take the bait. He’s not going to agree with the press. He’s going to defend his boss.

There’s a lot of prep work involved to make sure the press secretary has as much up-to-date information as possible. I’m sure the prep work is not unlike that of a presidential debate. Lots of numbers, statistics, and knowing how to counter anticipated objections.

Now, the media’s job is ostensibly to keep the government, the President, accountable. They want – again ostensibly – government transparency so that Americans can see them for who they are. Of course, they didn’t do that as much during Obama’s presidency. Now that they’re all too willing to ask ‘gotcha’ questions under the guise of exposing lies, corruption, and ‘alternative facts.’ That shows the media’s own glaring inconsistencies and improprieties.

Here’s Sean Spicer talking about his job with CBS This Morning:

GAYLE KING: But sometimes what you’re saying there at the podium doesn’t appear to jive with the facts of what’s been presented with whatever the issue is. And I’m wondering how you deal with that.

SEAN SPICER: Well, again, we go up there every day armed with a set of facts that we have. And sometimes it becomes a game of gotcha which is someone comes in and says, “Well, I know this instead.” And that– that’s– if that’s the game it’s who can stump the chump– then that’s not really– an– an exercise in trying to get to the bottom of a situation.

If it’s trying to figure out who can, you know, get the other person– that’s one thing. If it’s an attempt to really understand an issue we get up there every day, we do a lot of prep to try to make sure that we’ve got all the facts and the figures.

But if someone’s trying to figure out how they can– how they can sneak a fast one on us and say, “Did you know that line 78 of that bill had this provision in it?” Well, then that’s an honest attempt to really understand the news. We’re around all day long.

The press briefings usually happen at 1:00. And I’m always amazed sometimes at– at– at a member of the press corps that has sat on an issue for five or six hours only because they want to play a gotcha — you know, playing a gotcha question. If they’re truly interested in getting to the bottom of the situation they’ll be able to report out a story– I applaud that. But the question sometimes you have to ask is what’s the motive behind the– the tone and the questions they’re asking.