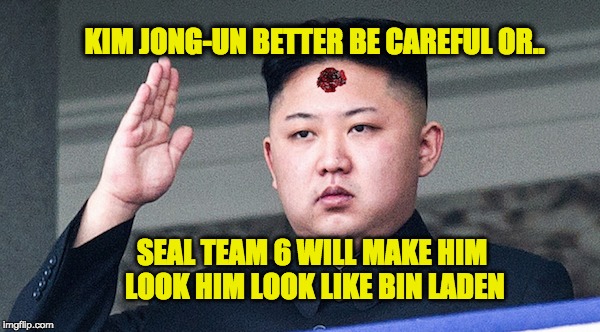 Each spring the United States and South Korea hold two joint military exercises, Foal Eagle and Key resolve. The Foal Eagle exercise started March 1 and will run through the end of April. On March 13, the Key Resolve computer-simulated command post exercise began and will run for eleven days through March 24. In a first, this year’s exercise will include Seal Team 6, and the word is they are they are training to take out Kim Jong-un and the rest of the North Korean leadership.  This does not mean an operation is about to happen, but it may mean they will be ready if and when an operation is needed.

The U.S. Navy SEAL Team Six will join the annual Foal Eagle and Key Resolve exercises between the two allies for the first time, along with the Army’s Rangers, Delta Force and Green Berets.

“A bigger number of and more diverse U.S. special operation forces will take part in this year’s Foal Eagle and Key Resolve exercises to practice missions to infiltrate into the North, remove the North’s war command and demolition of its key military facilities,” the official told Yonhap News Agency asking not to be named.

Also set to touch down in South Korea is Delta Force, a special mission unit of the U.S. Army whose main tasks include hostage rescue and counterterrorism, said the Defense Ministry. Together with SEAL Team 6, they will practice removing Kim Jong-un and destruction of North Korea’s weapons of mass destruction.

“It will send a very strong message to North Korea, which is constantly carrying out military provocations,” a ministry official said.

The UK Daily Star reported something similar,  “South Korean defence bosses have confirmed the drill will practice taking out the North Korean leadership.”

North Korea has become even more threatening as of late, tyrant Kim Jong-un celebrated New Year’s Day with a speech announcing that the North was in the final development an intercontinental missile that would allow the rogue regime to fire a nuclear missile and reach the United States. They launched two separate missile tests earlier this year, the latest of which was a week ago.

The special ops simulations delivers a message to the North Koreans (which they usually don’t listen to). Obviously President Trump wants to make sure that should the Kim Jong-un get too close to being able to deliver a nuclear war head, the United States military will not be caught flat-footed.