This Feud Would Make A Good Episode Of Celebrity Death Match 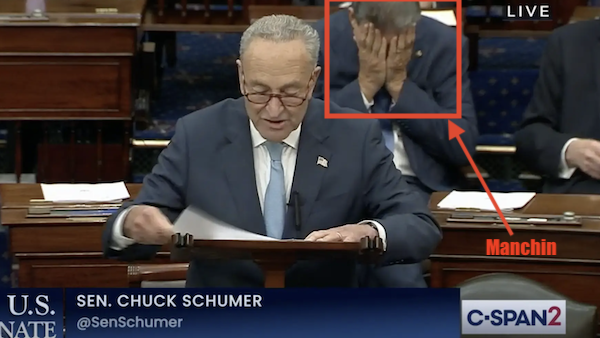 After the Senate voted for cloture allowing the approval of a short-term debt ceiling compromise on Thursday night. Senate Majority leader Chuck Schumer (D-NY) took the floor to slam his Republican colleagues.  Fellow Democrat Joe Manchin looked visibly upset at the divisiveness, shaking his head. Then covering his face with a two-handed facepalm. Finally, Manchin walked out while Schumer was still ranting.

Instead of being gracious after the passing of the compromise debt ceiling extension bill that many claimed was a Democratic win, Schumer read from a prepared divisive speech,

“Republicans played a dangerous and risky partisan game, and I am glad that their brinksmanship did not work.” And going after GOP leader Mitch McConnell (R-KY), “Leader McConnell and Senate Republicans insisted they wanted a solution to the debt ceiling — but said Democrats must raise it alone by going through a drawn-out, convoluted, and risky reconciliation process,”

Schumer didn’t stop. While he kept ripping his colleagues on the other side of the aisle, Senator Joe Manchin (D-WV) could be seen getting more upset.  After leaving in the middle of Schumer’s tirade, Manchin expressed his disappointment, “I didn’t think it was appropriate at this time,” Manchin told reporters, adding, “We have to de-weaponize. You can’t be playing politics. None of us can — on both sides. “Civility is gone.”

Manchin tells us he didn’t like Schumer’s speech after the vote to break a filibuster on the debt ceiling. "I didn't think it was appropriate at this time," he said, arguing that "we need to de-weaponize" and stop "playing politics … That was not a way to take (frustration) out” pic.twitter.com/TsGDsMNAqK

According to Jake Sherman of Punchbowl News, after the final vote, Manchin went to Schumer on the Senate floor after that his speech was “f**king stupid.”

Schumer’s divisiveness was an example of his short-term thinking. The compromise deal only extends the debt limit for about two months. Sometime during the two months of the extension, he will need the support of Manchin or few Republicans to pass a spending bill and another longer-term increase in the debt limit.

As part of the Democratic spending plan, Schumer will try to pass the monstrous $3,5 trillion reconciliation bill, but he’s two votes short to pass that bill. One of those no votes is the same Joe Manchin, who he upset with his divisive speech. Manchin opposes the bill for many reasons, most notably the crazy high level of spending. Also driving the Senator away from the deal is the climate change elements that will severely damage West Virginia’s economy, as its a major coal-producing state. Its coal production is one of the reasons Biden lost the state in the 2020 election by almost a 40 point margin.

The Democrats want to eliminate the filibuster to pass their agenda. That way, legislation could be passed with 50 rather than 60 votes. The purpose of the filibuster rule is to force Senate leaders to negotiate with their opposition and come up with compromises. As a moderate Democrat (one of the few), Manchin says he wants compromise.  Therefore,  Manchin has promised not to allow the elimination of the Senate filibuster.

Judging by his reaction to Schumer’s rant, Manchin will be even less likely to go along with the massive $3.5 trillion reconciliation bill and to trash the filibuster even if it’s just for the increase of the debt limit when it comes for a vote in December.

Ed Morrissey gives the background on the Manchin-Schumer feud at Hot Air, It’s a good article so click here and give it a read.