He Didn't Want It, Then He Wanted It, Now He Doesn’t Want It Again 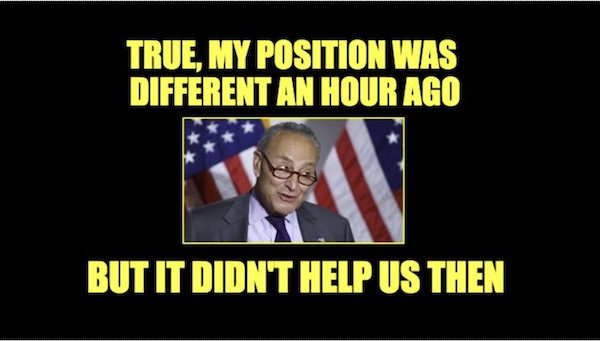 Many people might think Chuck Schumer was a Hypocrite-they’re correct. He is a hypocrite. He supported ending the filibuster in 2013, then fought to keep it four years later.

In 2013 when then majority leader Harry Reid (D-NV) eliminated the filibuster for all Judge appointments except for the Supreme Court, Senator Schumer (D-NY)    supported him. After all, they were fighting to help a Democratic Party President.

When Schumer joined leader Harry Reid in announcing they were ending the filibuster for most presidential appointments. Schumer said there should always be an up or down vote no matter who is in charge. “We’d much prefer the risk of up-or-down votes in majority rule than the risk of continued total obstruction. That’s the bottom line, no matter who’s in power.”

That decision opened the door for Mitch McConnell (R-KY) to add SCOTUS nominees to the no filibuster list in 2017. Because the nomination came from a Republican, Schumer changed his mind and fought to keep the filibuster

But in 2017, the Hypocrite Chucky Schumer said something totally different. He called for his Senate Democratic Party conference to filibuster Judge Gorsuch.

“I have concluded that I cannot support Judge Neil Gorsuch’s nomination to the Supreme Court. His nomination will have a cloture vote. He will have to earn 60 votes for confirmation my vote will be no and I urge my colleagues to do the same”.

What happened? Is Chuck Schumer being hypocritical? Perhaps he has some mental disorder that makes him forget his recent stances, like Dementia Joe. Maybe that same disorder makes him wear glasses anywhere but the tip of his nose.

Schumer didn’t like two of the three decisions above, and now he is calling to end the filibuster again. Republicans shouldn’t worry though. Just give him a few weeks. He will probably change his mind again.