Chuck Schumer Blames POTUS For Nightmare That Is The NYC Subways 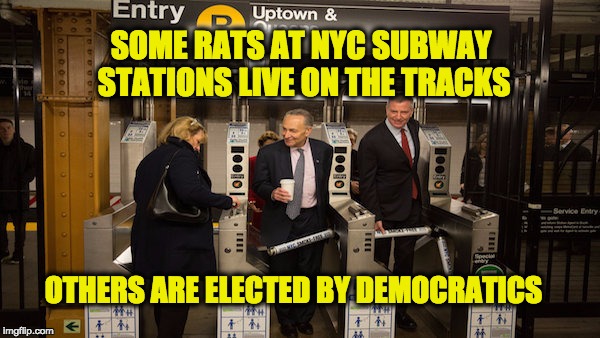 From 1981-2012 I commuted to Manhattan five days a week. The railroad ride would be followed by a few stops on a NYC Subway where the only thing more disgusting than the subway cars were the stations which were not only littered with uneaten food and various types of paper,  but gobs of something of an unusual color sticking to the floors and walls. On the bright side, when the subways were late (which was usually the case) or too packed to squeeze oneself in (which was the rest of the time) there was always some wildlife to appreciate (the indigenous NYC rat).

Five years since what was thankfully my last ride on a NYC subway, Senator Chuck Schumer’s finally admitted why every open seat on a NYC Subway was next to either a homeless guy talking to himself very loudly,  or a business woman who soaked herself in perfume for a few months. Apparent the subway sucked so bad because of President Donald Trump! Sure he wasn’t president back then, but the Senator who still hasn’t learned how to wear a pair of glasses, insists that it’s all the fault of the 45th president.

Schumer, the “party before state or country” Democratic Senator from New York is unabashedly unhappy with President Donald Trump, and likely considers himself a key element to the left’s ridiculous “resistance” movement–in fact he sees it as his primary reason for going to work (well that and the opportunity to be seen on camera).  In that role, Schumer has been opposed to the President’s every move, regardless of the position or the benefits.  It is simply a show of bipartisan bickering and stagnation – something Schumer has excelled at in the past.

Now, as New York residents are beside themselves with anger over the complete and utter failures of the NYC transit system, Schumer has turned to Twitter.  Not for help in solving his city’s problems, mind you.  No, Senator Schumer is imploring his constituents to annoy the President with their complaints instead of him.

“The New York City subway system is in chaos. Trains are not running on time and commuters are being left stranded. The anger of this has people in the city beating the hell out of each other. According to the Senate Minority Leader, this is all because of Trump somehow:

Train delayed? Tweet @POTUS to support rail infrastructure programs like #Gateway so we have tunnels & rail systems that work for you. 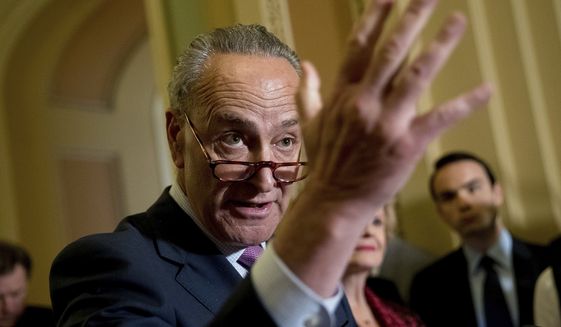 “Well, first off, Trump actually has a trillion-dollar infrastructure plan that democrats hate because it doesn’t provide federal funding for abortions. After the President unveiled this plan to build bridges and tunnels and put Americans to work, Schumer [defecated] all over it saying ‘President Trump’s campaign promises on infrastructure are crumbling faster than our roads and bridges.’

“This is one of those things that if Trump proposes it, democrats automatically hate it. This should be a bi-partisan deal because it benefits the entire county. There should be support from both sides, but liberals are trying to show how much they support the anti-Trump resistance forces instead.”

New York City has been reeling after decades of liberal rule, and this latest infrastructure failure is just the latest in a long line of Big Apple boo-boos. And under DeBlasio things have gotten worse.

Schumer’s weak attempt to draw the President into a Twitter flame war is indicative of just how low the democrats are willing to stoop in order to “resist” the leader of the free world.  While Donald Trump navigates a minefield of Washington elitist booby traps, irrelevant career politicians such as Schumer lobbing grenades from the safety of his office wi-fi create zero opportunities for anyone to make America great again.  Perhaps the Senator’s time and resources could be focused on fixing the problem and not spreading his own blame around.

Well…if he could actually see the problem–he probably can’t as he wears his glasses like an old lady.