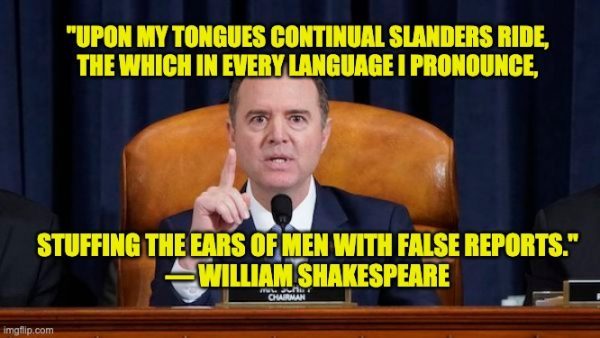 FCC Commissioner Brendan Carr has been looking for answers as to why Rep. Adam Shifty Schiff was behaving like his own personal FISA court in subpoenaing US Citizen’s phone deets. And Shiff is ghosting him. Schiff’s secret subpoenas.

So much for Schiff’s breathless speeches about defending the Constitution and the need for oversight.

The actual examples we see about reckless abuse of authority is coming from the political left.

Sara A Carter had FCC Commissioner Brendan Carr as a guest on her podcast the other day. She asked him some questions about threats to our liberty. They went into the China question, naturally, but they didn’t JUST talk about the Virus That Devoured The News Cycle.

They went into the potentially very evil and unconstitutional actions of one Adam Schiff. Defender of all that is ‘right and good’ in the bizarro-world of upside-down Democrat value sets.

They appear to be ‘protecting the Constitution’ by violating civil rights. That makes about as much sense as burning down your house to protect it from burglars.

The show reminds us how we got there — that Schiff was trying to subpoena Trump’s financial records, just because he thought he had a right to them. That was challenged in court and blocked.

Shiff changed his tactics. He began to issue secret subpoenas. They were using the word ‘thousands’ to describe the amount of data received. This practice made his defacto powers comparable to a FISA warrant. There was no recourse for those whose lives were being peered into to protest to the court and say ‘that is beyond your authority,’ and ‘you are violating my Fourth-Amendment rights.’

Schiff’s subpoena powers were not hindered by such ‘trivialities’ as the inviolable rights of the US Citizen. Schiff even published personal call information in the Soviet-style show-trial he put on under the guise of ‘impeachment.’ He published — without cause — the names of journalists like John Solomon, Presidential associates like Guiliani, and even Congressmen sitting on the very Committee Schiff Chaired — namely Devon Nunes.

As the Democrats gear up to take another run at destroying the President under the guise of investigating the COVID-19 / CCP Wuhan Chinese Coronavirus response, you can expect they will look to play fast and loose with subpoenas in a similar fashion… if we let them.

And we can CERTAINLY expect that a party that has already laid the deaths of Americans at the feet of the President will be deeply concerned about getting to the truth of events as they happened, and would NEVER attempt to weaponize this against a political rival… right?

Of course not. Just like wild dingos are great with kids.

You can find the podcast in the link here, which takes you to a story about MORE nefarious dealings by Shifty… who is showing himself to be the very opposite of Transparency and has himself quite a little authoritarian streak.

Frustration is mounting against Schiff, D-CA, and so is patience among those in the administration, Congressional lawmakers and intelligence community who believe the American people have a right to see for themselves the testimony given by 53 witnesses behind closed doors during Congressional investigations into the FBI’s questionable actions and malfeasance during its investigation.

There’s a reason Schiff is fighting back, despite the unanimous bipartisan vote to release the transcripts in the fall of 2018. Schiff doesn’t want you to know the truth. The truth will destroy his credibility and the deceitful disinformation campaign he worked so hard to spread against President Donald Trump and his administration for years. This is the major reason why he has fought so diligently against his own committee’s vote and why he has scrambled behind the scenes on Capitol Hill to keep the documents, which should have been made public within weeks or months of the vote, from every seeing the light of day.

We’ve all seen the dishonest games the left have played with the power they’re entrusted with. Especially as to Schiff, Nadler, Pelosi, and Schumer, they’re obviously unworthy of that trust.

William Shakespeare, known in Brooklyn as the Boid of Avon, may have been talking about the four stooges above when he wrote in Henry IV, Part 2, ”

“Upon my tongues continual slanders ride,
The which in every language I pronounce,
Stuffing the ears of men with false reports.”