SCHIFF KNEW: Had Account Of Whistleblower Complaint Before It Was Filed 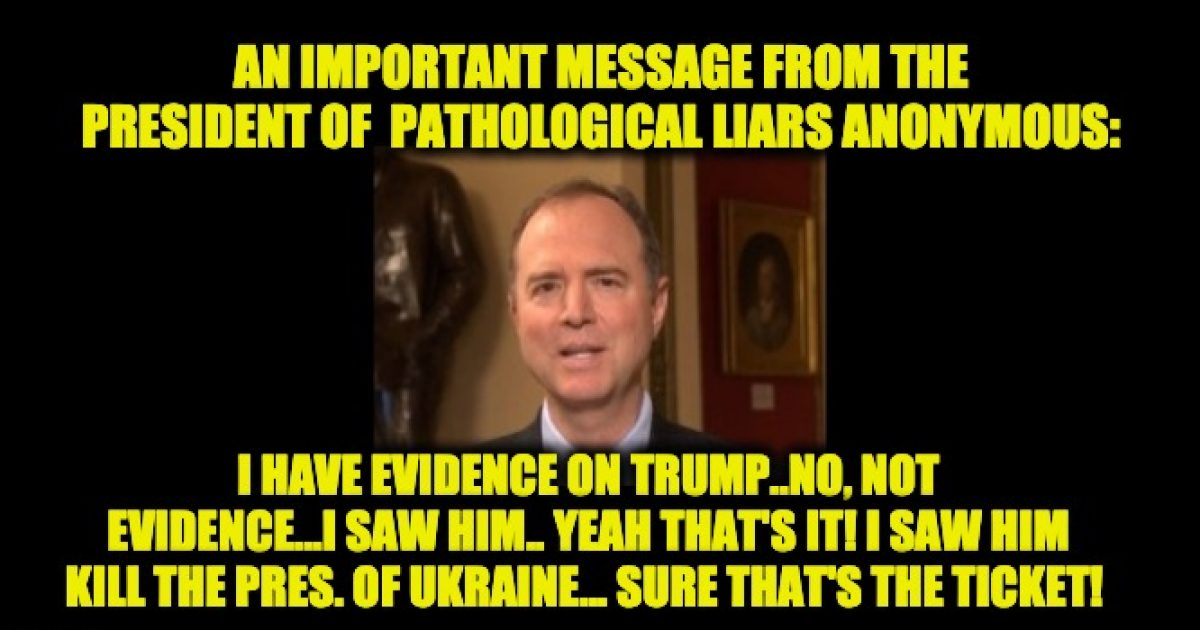 According to the liberal NY Times an aide of the Bug-eyed Barrister of Burbank, Adam Schiff got an early warning and review of the accusation of the whistleblower.

Before going to Congress, the C.I.A. officer had a colleague convey his accusations to the agency’s top lawyer. Concerned about how that avenue for airing his allegations was unfolding, the officer then approached a House Intelligence Committee aide, alerting him to the accusation against Mr. Trump. In both cases, the original accusation was vague.

The House staff member, following the committee’s procedures, suggested the officer find a lawyer to advise him and file a whistle-blower complaint. The aide shared some of what the officer conveyed to Mr. Schiff. The aide did not share the whistle-blower’s identity with Mr. Schiff or anyone else, an official said.

“Like other whistle-blowers have done before and since under Republican and Democratic-controlled committees, the whistle-blower contacted the committee for guidance on how to report possible wrongdoing within the jurisdiction of the intelligence community,” said Patrick Boland, a spokesman for Mr. Schiff.

What Boland didn’t say is what many suspect that Schiff’s office helped to focus the complaint and give it more of a legal format with footnotes.

Take for example, Legal Insurrection’s William Jacobson who is a Clinical Professor of Law and Director of the Securities Law Clinic at Cornell Law School. Jacobson wrote:

When the so-called Whistleblower Complaint was released this morning, my first impression was that this was a very professionally-done document, likely crafted by a lawyer.

It looks like a lawyer letter. It’s very legalistic in many parts, cites to statutes and executive orders, and is heavily footnoted. It attempts to bring together evidence from disparate sources, including public news reports. It is, in every sense, a closing argument or brief in support of a position by someone who did not actually participate in the events about which he or she is writing.

The document does not at all read like we would expect a whistleblower complaint to read — alerting the appropriate authority to facts the whistleblower has learned and leaving the legal conclusions to those authorities.

Of course, Schiff’s spokesman didn’t admit the document looked like it was written by a lawyer. He told the NY Times that everything was Kosher:

To paraphrase Jon Lovitt’s character, “Yeah! That’s the ticket!”  He never knew what the whistleblower would deliver. Sure and I have a full head of hair.

The future whistle-blower went to Mr. Schiff’s committee after he grew concerned about the first investigation he had touched off.

The C.I.A. officer first had a colleague take his concerns — in vague form — to the C.I.A.’s general counsel, Courtney Simmons Elwood, who began a preliminary inquiry by contacting a deputy White House counsel, alerting the White House that complaints were coming from the C.I.A.

As C.I.A. and White House lawyers began following up on the complaint, the C.I.A. officer became nervous, according to a person familiar with the matter. He learned that John Eisenberg, a deputy White House counsel and the legal adviser to the national security adviser, was among those scrutinizing his initial allegation.

Contacts in the National Security Council had also told the C.I.A. officer that the White House lawyers had authorized records of Mr. Trump’s call with Mr. Zelensky to be put in a highly classified computer system, meaning that the lawyers who were now helping the C.I.A. investigate the officer’s allegations were the same ones implicated in them. The officer has alleged that White House aides’ decision to store the call records more restrictively was itself an abuse of the system.

Sure it didn’t matter that the Obama administration did it, or the fact that early in the administration, President Trump’s conversations with foreign leaders were leaked to the press.

The C.I.A. officer decided the complaint he had brought to Ms. Elwood was at risk of being swept aside, prompting him to go to the lawmakers who conduct oversight of the intelligence agencies.

He followed the advice of Mr. Schiff’s aide and filed his complaint to Mr. Atkinson. And though Mr. Maguire blocked him from forwarding it to Congress, he did allow Mr. Atkinson to notify lawmakers of its existence.

Mr. Atkinson also noted that the CIA officer showed indications of “political bias” and was “in favor of a rival political candidate,” a new document shows.

By the time the whistleblower filed his complaint, Mr. Schiff and his staff knew at least vaguely what it contained. And most probably started on his impeachment strategy.

And the fact that the whistleblower went to Schiff and he didn’t share the information with the ranking member is a serious violation of house rules. As Fred Fleitz tweeted, “under @HouseIntelComm rules, any classified info brought to the committee from outside sources MUST BE SHARED WITH BOTH SIDES. Schiff broke committee rules by not telling committee GOP members about this. This is a very serious violation of @HouseIntelComm rules. Why did Schiff do this, especially when he was using this information to score political points throughout the month of August? The reason is clear: it was part of the latest Dem ploy to take down @realDonaldTrump”

He not only broke the rules but Schiff’s statement to MSNBC last week that he never spoke to the whistleblower was a lie.