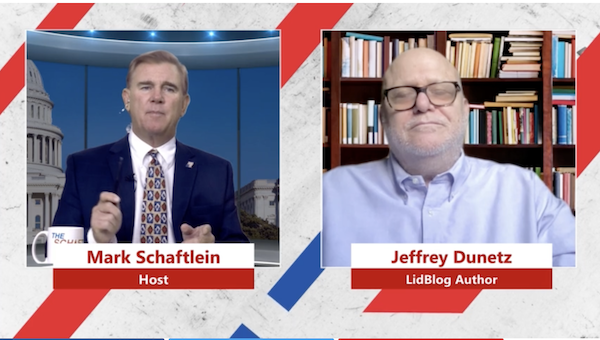 On Thurs, 7/14, Jeff Dunetz, The Lid, did his usual Thursday guest gig on Mark Schaftlein’s Schaftlein Report. For those who don’t know, The Lid has the great honor of being Marks’s guest every Thursday,

We began by discussing the awful economy and inflation we transitioned to Biden and Israel and finally the latest political news.

Below are the specifics of our conversation and a video of the show.

1) Wholesale PPI increase of 11.3% is WAY too high and will bleed into an already accelerating Inflation with rising input costs.

2) Biden says June Inflation is “Unacceptably high”, but out of date. Is it possible it peaked – MAYBE?
The risk is the wage-price spiral.

3) Excluding Food and Energy, the Core CPI was at 5.9%. Former Treasury Secretary under Obama, Larry Summers characterized it as “Way too high and out of control” Summers warned of this a year ago.

4) Sen. Manchin throws cold water on a scaled-back “Build Back Better” as increased inflation is too much of a risk for additional spending. The problem is the Biden administration and Democrats philosophically want to spend more on climate and other initiatives because that is their core belief.

His administration cares more about climate and social issues than inflation and the economy. They are the ultra-leftist liberal administration policy staffers. The public is NOT with them.

5) Biden’s trip to Israel – The history contradiction and difference between Trump and Biden’s approach to the Middle East and the ramifications of policy changes. The success of the Abraham Accords and our relationship with Iran and Saudia Arabia. Biden says “We will not allow Iran to acquire a nuclear weapon”. Also claims he supports Abraham Accords–Sure and I say I have a full head of hair.

6) Trump’s strategy on when to announce his 2024 candidacy is hotly debated in the Trump world and in Republican circles. What are the pros and cons of waiting until after the midterms vs announcing earlier?

Make sure to watch/listen to Mark’s program every Monday-Thursday. It’s always a great show, but to be honest, it’s a little better on Thursdays when I’m the guest.