Rep. Scalise Slams Pelosi: She’s Painting GOP As The Enemy So She Can Take Away Gun Rights 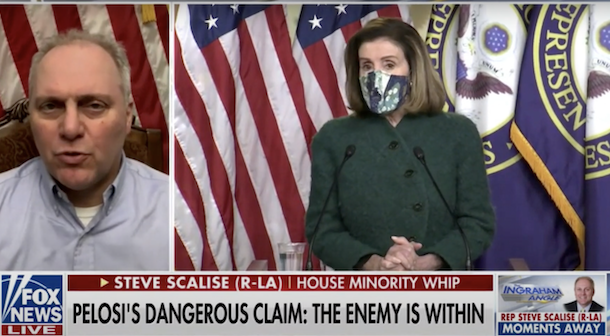 The House Speaker took aim at Republicans last week, asserting fears amongst her caucus for their safety in the presence of GOP lawmakers had grown so much that they would have to increase funding for security details.

“I do believe and I have said this all along, that we’ll probably need a supplemental for more security for members when the enemy is within the House of Representatives,” she alleged.

The simple-minded amongst Democrats have parroted her smear campaign, culminating with Rep. Alexandria Ocasio-Cortez who literally accused Senator Ted Cruz of “almost (having) me murdered.”

House Speaker Nancy Pelosi said lawmakers would likely need more funding for security to protect them not just from outside threats, but also potentially from their own colleagues, whom she described as ‘the enemy within’ https://t.co/aPSyvvEMfO pic.twitter.com/jRYqHMekdz

Steve Scalise Says It’s a Pelosi Gun Grab
Scalise accused Pelosi of ratcheting up the rhetoric as a means to distract from President Biden’s executive orders which have implemented a far-left agenda and killed jobs by the thousands.

Worse, he asserted Pelosi was laying the groundwork for eviscerating the Second Amendment.

He continued, “They’re building this predicate that, ‘Oh, my God, everybody better be afraid of somebody with a gun,’ and that’s going to be their attempt to then go take away the guns.”

Scalise, who was critically injured during a politically-motivated mass assassination attempt in 2017, also criticized Democrats for their caustic words.

“You know, she needs to stop doing this, because we have seen where this goes, if they try to demonize their opponents,” he said.

Scalise was shot along with 5 others in “an act of terrorism … fueled by rage against Republican legislators” when “left-wing activist” James Hodgkinson opened fire at a Congressional baseball practice.

So yea, he knows exactly where demonizing your opponents as enemies, murderers, and traitors will go.

Psycho @SpeakerPelosi says that House members who practice their 2nd Amendment rights are “enemies from within”.

Hey Nancy – YOU are an enemy to the entire country for fighting to STEAL our right to protect ourselves!#FixIt https://t.co/eBRBwVtotj

Scalise has said the leftist shooting in 2017 only fortified his resolve when it came to protecting the Second Amendment.

Rep. Scalise (R-La.) tells Fox that his experience has "fortified" his view about 2A ?? pic.twitter.com/GNirKJAew6

In their interview, Ingraham agreed that Pelosi is aiming to take away Second Amendment rights.

They “are setting the stage to make a run on the guns of law-abiding citizens,” she said.

A video of the Scalise/Ingraham interview follows.

Cross-posted with The Mental Recession