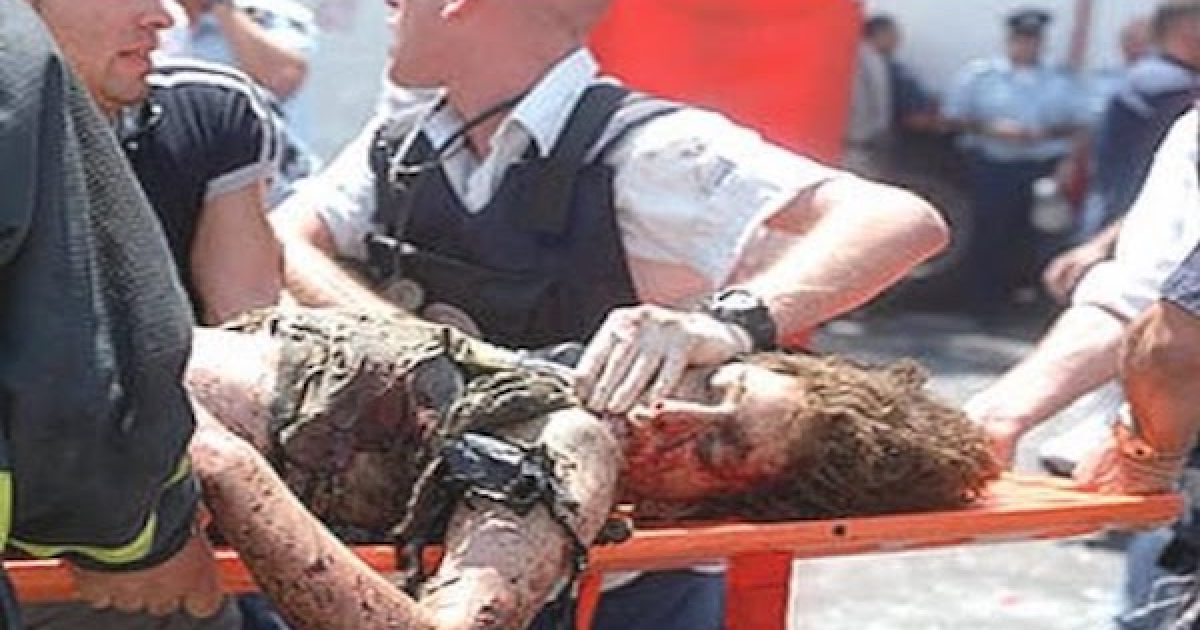 As Europe continues to complain about President Trump’s sanctions on terrorist supporting Iran, it is important to point out their failure to learn from the past. At the same time, they are pushing back against the sanctions and supporting a deal that gave Iran the funds to support terror, fifteen families, indeed an entire nation is mourning a horrible terrorist attack that happened a few weeks before 9/11/01.

Seventeen years ago on August 9th, 2001 Palestinian terrorists blew up a pizza place in the heart of Jerusalem killing 15 people including seven children and a pregnant woman. They wounded 130. A month later, other Islamist terrorists blew up the World Trade Centers in NY, the Pentagon Building in Washington DC, and were foiled in their attempt to destroy the Capital building by the brave passengers of Flight 93.

It is important to remember these acts, not merely to memorialize the innocent victims whose only crime was to be at the wrong place at the wrong time, but as a reminder that Europe’s rejection of President Trump’s actions prove terrorism is still suckling at the teat of political correctness and Western World appeasement. 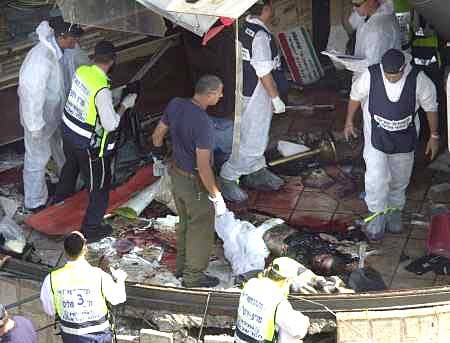 From ” A Personal Account of the Bombing” by Rabbi Binny Freedman 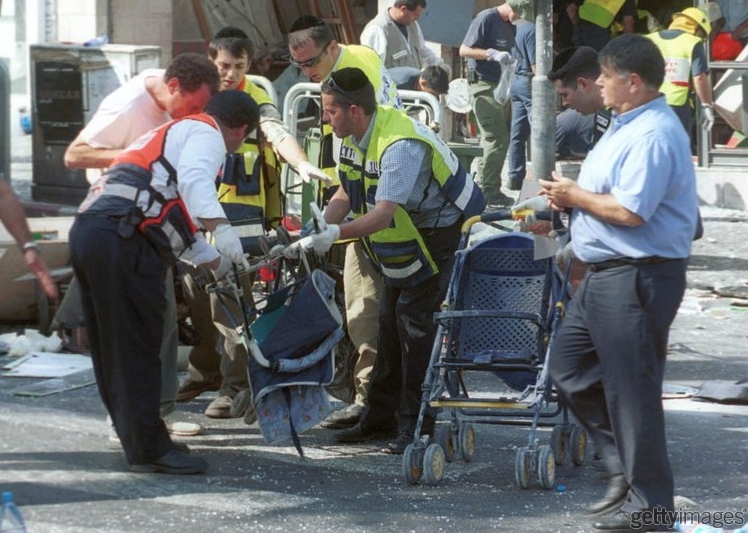 Terrorist Ahlam Tamimi helped to plan the Sbarro attacked and drove the murder to the pizza shop in Jerusalem in August 2001.

On the day of the massacre (9th August 2001), she transported the bomb (10 kg) from a West Bank town into Jerusalem, concealed inside a guitar case. Taxi cabs brought her and an accomplice by the name of Al Masri, a young, newly religious fanatic, to an Israeli security checkpoint and from there into Jerusalem.

Six years later in June 2007, a smiling Tamimi was featured in a New York Times review of a Cinemax documentary about Israeli prisons,  the article didn’t mention that she helped to kill fifteen innocents. But that’s how the liberal media and politicians treat terrorists, or as they like to call them “militants.” 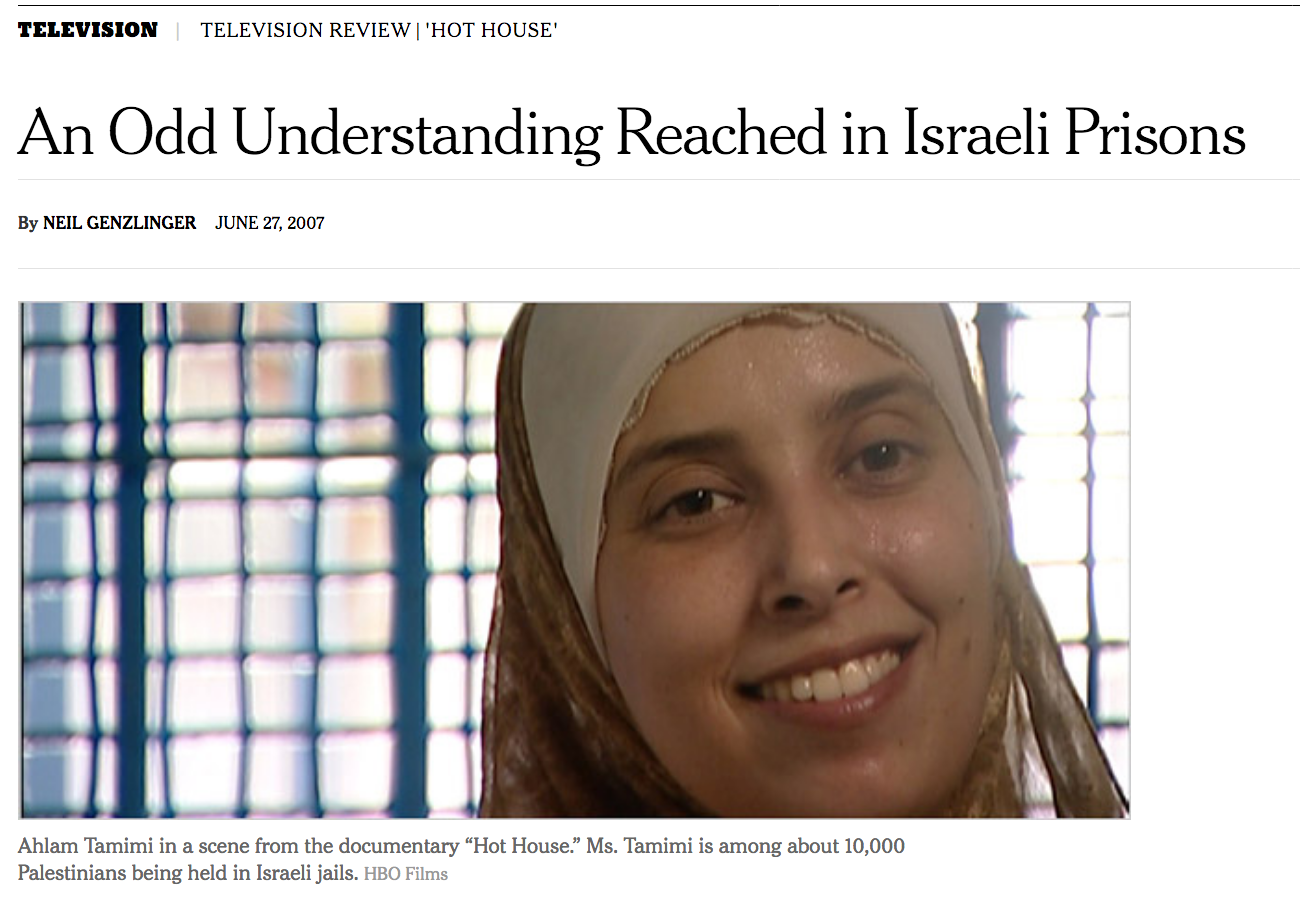 Ahlam Tamimi was captured, jailed for the murders, but released from an Israeli jail in 2011 as part the prisoner exchange for the kidnapped Israeli, Gilad Shalit. To this day she has shown no remorse for her mass-murder. Today she lives in Jordan with a TV show on the Hamas TV network. And the world is silent. 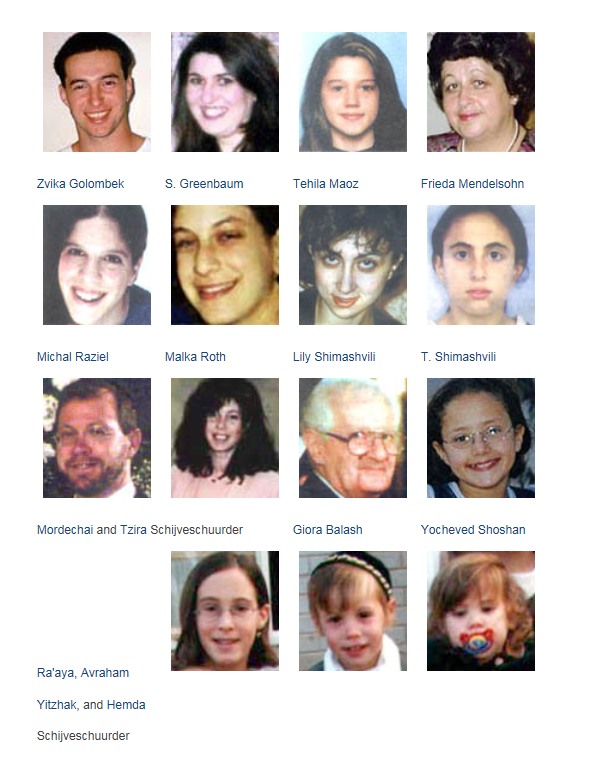 May the names and memories of the dead always be for a blessing:

The primary blame for this massacre goes to the terrorists that planned and executed this massacre, Hamas the terrorist group that the bombers associated with, and Fatah, the ruling party of the Palestinians which still celebrates the murderers as heroes. But there is blame to go much further than that.

Radical Islamist terrorism has been suckling at the teat of the appeasers who run most of the western world. The governments who believe it’s possible for murderous terror organizations to have a separation between their military and political wings, which make deals with terrorist funding countries such as Iran and back terrorist supporting organizations such as the Palestinian Authority to have a seat at the United Nations table. 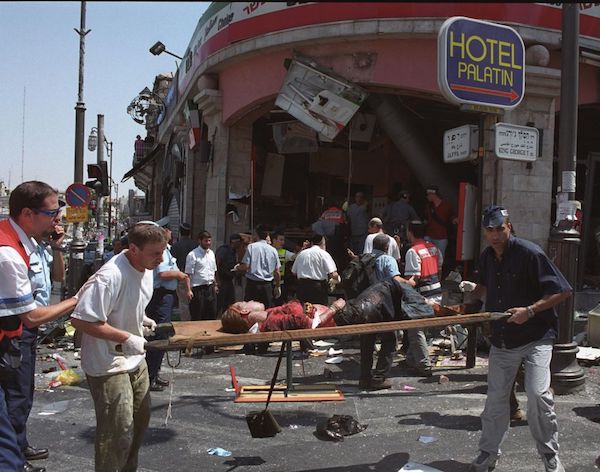 Thanks to decades of appeasement the radical Islamist world learned terrorism is a legitimate means of political expression. That same appeasement directly led to 9/11/01, al Qaeda, ISIS, and every other Islamic terror organization in the world today.

The Sbarro bombing was not the first of these horrible murders or the deadliest. A little over a month later another terrorist attack, this time in the United States captured the world’s attention and drove the United States to become actively involved in the war against terror. And 9/11, for the first time in its history a US president treated a terror attack in Israel the same as any other act of war against civil society (at least until the Republicans lost Congress in 2006 and things began to revert).

After election day 2008 under the leadership of new President Barack Obama the US reverted to the pre-9/11 US mentality and even began to blame Israel, the victim, for terrorist attacks in the holy land.  Even worse this country stopped fighting a war to wipe out the fanatical Islamists.  Fifteen years after Sbarro, and almost 15 years after 9/11/11, we had a President who believed in leading from behind, and the Islamists had the United States on the run. 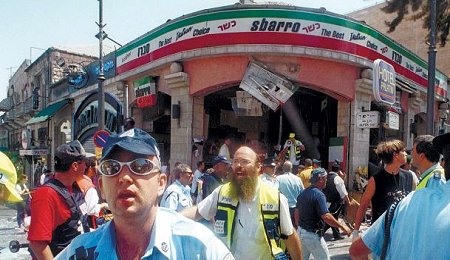 For the eight years of the Obama administration, Palestinian violence was encouraged by a president doing all he could to force Israel to make one-sided concessions to the supposed “moderates” in Fatah, despite their refusal to recognize Israel as a Jewish State, and continued the killing of innocent Israelis. Via both of his secretary of states, Hillary Clinton, and John Kerry,  Obama pushed peace with President Abbas’ Fatah Party,  even though they didn’t want peace, and idolized & paid mass-murderers like the one who blew up a Sbarros pizza place in Jerusalem, as heroes.

Thankfully America has a new President, Donald Trump who believes that America should lead the world in the effort to destroy the terrorist menace everywhere in the world (including Israel). He also fights for the incitement of terrorism anywhere in the world to be stopped.

Until the world recognizes the fruits of their appeasement, by not funding or recognizing any terrorist organization or state as legitimate,  horrors like the Sbarro bombing, 9/11, San Bernardino, Paris, Orlando, and others will continue to happen in Israel, Europe, the US and elsewhere throughout the world.

The supposedly moderate Palestinian Authority run by President Abbas and his Fatah Party takes some of the aid money provided to it by western nations to pay blood money to terrorists and their families including almost $300K the Sbarro bombers:

By September 2018, the PA will have cumulatively rewarded Barghouti, Tamimi, and the family of Al-Masri with at least $294,332, but Europe says or does nothing.

For the past three months, Hamas has been attacking every Friday after prayers–the terrorist organization has accelerated its attacks via rocket attacks on an almost daily basis. The only reaction from the Europeans is to blame Israel for protecting herself reenforcing the Hamas belief that terrorism is a legitimate form of political expression.

One reason President Trump withdrew from the Iran deal was the rogue regime’s funding of terrorism throughout the world.  Rather than recognizing that Iran is funding terrorism with the money, it received from Obama (and there is no way to discern whether Iran is keeping its end of the deal because the lack of real inspections), Europe is doing what it always does appease. Rather than go along with President Trump’s new sanctions, Europe is fighting back—too oblivious to realize that all they are doing is feeding the terrorist monster.