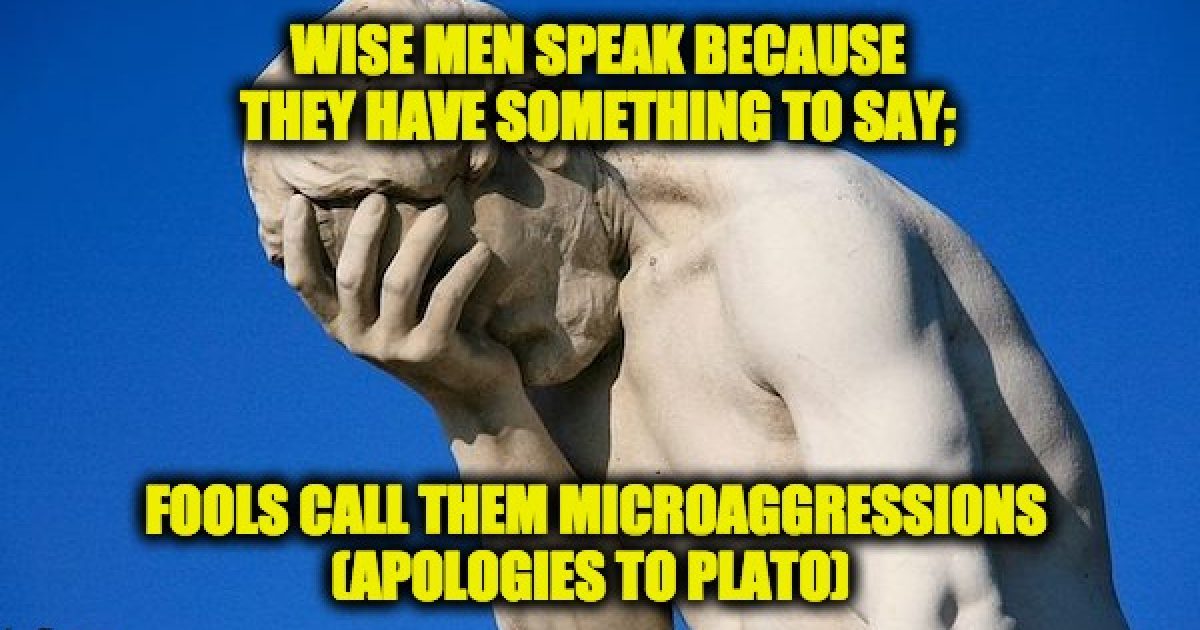 This has to be a sign of the apocalypse, or at the very least, the end of civil society. We know that colleges today have become nothing more than leftist indoctrination centers destroying the minds of our children but this above and beyond crazy.   A document put out by the University of California which seeks to help students recognize so-called microaggressions.  Among the things the document says is racist is saying, “I’m not racist.”

From the official University of California list of racist “microaggressions”:
• “There is only one race, the human race.”
• “I believe the most qualified person should get the job.”
• “America is the land of opportunity.”https://t.co/xxrsMrq6Xu

Of course, we know there is more than one race, there’s Daytona and the Indy 500, and to be honest, if the most qualified person got the job Maxine Waters, Nacy Pelosi, and Sheila Jackson Lee would be out of work, and if America really was the land of opportunity, the NY Jets would have the opportunity not to suck every year.  But as truisms, as goals the three statements above are not racist, they are admirable goals.

The U-CAL document also claims that saying, “Everyone can succeed in this society if they work hard enough” is a racist microaggression that really means, “people of color are lazy and/or incompetent and need to work harder.”

There’s more.  The document claims that “being forced to choose Male or Female when completing basic forms” is sexist or heterosexist.

And, the University says, “continuing to mispronounce the names of students after students have corrected the person time and time again” is also a racist microaggression.

“Continuing to mispronounce the names of students…Not willing to listen closely and learn the pronunciation of a non-English based name.”

Lol, I worked at a Persian restaurant for months. Owners couldn’t ever pronounce my name; called me Barbie instead. Didn’t bother me

We’ve previously reported on other universities that use similar guidelines for “microaggressions,” including the University of Wisconsin-Milwaukee, which launched a campaign that claimed using the term “politically correct” as a pejorative is a politically incorrect “microaggression”.

A “Bias-Free Language Guide” posted on the University of New Hampshire website also asserted that the word “American” is “problematic” because it “assumes the U.S. is the only country inside [the continents of North and South America].”

WAIT A Second! Senior Citizens? Screw that! I waited 60 years to get that discount in the movie theaters, no New Hampshire liberals are going to take it away from me.

Is it any wonder our children are so messed up?

Consider this: a recent poll of university students said that 53 percent value “diversity” while only 46 percent value free speech.

According to the Times Higher Education:

US university students value a diverse and inclusive environment more than free speech rights, according to a new study on student attitudes on free expression.

The report from Gallup and the Knight Foundation comes at a turbulent time on college campuses nationwide, where students have challenged the principles of the US Constitution’s First Amendment – they have called for controversial campus speakers to be disinvited and, when they disagree with speakers’ messages, have shouted them down. They’ve also called for administrators to invest more in diversity initiatives and are demanding clear statements from them against speech they deem hateful.

“Hateful,” of course, means anything non-PC or right of center, as we’ve seen time and again.Perhaps it’s time for parents to consider other options when it comes to choosing colleges for their everyone gets a trophy, no one loses, everything is done for them, hide in safe spaces children who have never learned how to think for itself because they have been spoon-fed since birth. Even better perhaps it’s time we raise our kids differently.

Most of this post was originally seen at Conservative Firing Line.