Saudi Prince Says Trump Is ‘True Friend Of Muslims,’ Will Hawaii Judge Hold Him In Contempt? 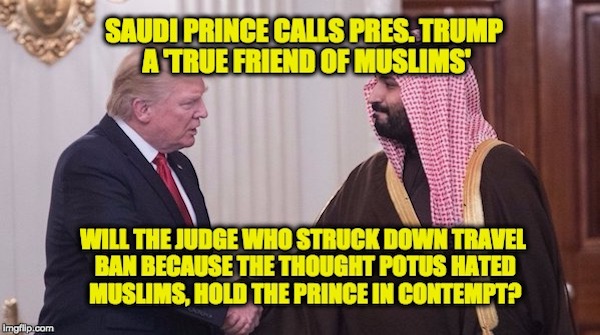 Boy oh boy, his is going to make the liberal media angry. They have been trying to sell their narrative that President Trump hates every ethnic group, but especially Muslims. But yesterday the President met with a member of the Saudi Arabian Royal family who said Trump was a true friend of the Muslims.  Saudi Arabia isn’t just any Muslim country, it’s the birthplace of Islam, and home to the religion’s 2 most sacred mosques. Representing the home of approximately twenty-five and half million followers of Islam, the Saudi Prince also said he supported the American President’s travel pause, but don’t tell that to US District Court Judge Derrick Watson. Judge Watson is the Hawaiian-based judge who stopped the President’s revised temporary travel ban. But he didn’t base his decision on the law but he based it on the fact that in his own opinion, Trump wanted the pause to be a Muslim ban. Obviously the Saudi Prince does not agree, leading to the question can a federal judge hold a Saudi Prince in contempt for what he says to the press?

My friend and colleague Onan Coca wrote about the Prince and the President meeting in Constitution.com:

President Donald Trump met with Prince Mohammed Bin Salman of Saudi Arabia on Wednesday and it’s safe to say that the meeting went as well as anyone could hope for.

The Saudi delegation left the conversation in high spirits and later told the media that they believe Saudi-American relations had just reached a new “turning point.” They praised President Trump as a “true friend of Muslims” all over the world and argued that his policies would make everyone safer and more prosperous… not just Americans, but citizens of the world.

It marked a serious shift in the Saudi attitudes towards the United States, as the Saudi government had previously been VERY critical of the Obama administration’s efforts in the Middle East [Jeff note: they thought he was a weakling who was pushed around by Iran] In fact, as the United States moved away from Israel during the Obama years the Saudis seemed to realize that Israel was their best hope of keeping peace in the Middle East and have become closer friends with the Netanyahu government as a consequence.

“Relations had undergone a period of difference of opinion,” a senior adviser to the crown prince said in a statement after Tuesday’s meeting. “However, today’s meeting has put things on the right track, and marked a significant shift in relations, across all political, military, security and economic fields.” …

In a statement Wednesday, the White House said that Trump and the prince “directed their teams to explore additional steps across a broad range of political, military, security, economic, cultural, and social dimensions to further strengthen and elevate the United States-Saudi strategic relationship” and to confront “Iran’s destabilizing regional activities.”

The Prince and the President had a wide-ranging discussion that touched on various issues with the Saudis noting their agreement on several hot-button issues like the border wall and illegal immigration, Iran, terrorism, nuclear power and weapons, and the economy.

In particular the Saudis went out of their way to make the media understand that Donald Trump is not anti-Muslim, and that his travel ban is specifically designed to make America safer.

Prince Mohammed Bin Salman discussed with President Trump the issue of banning some citizens from six countries from entering the United States of America and that His Excellency is closely monitoring this matter from the beginning. Saudi Arabia does not believe that this measure is targeting Muslim countries or the religion of Islam. This measure is a sovereign decision aimed at preventing terrorists from entering the United States of America. President Trump expressed his deep respect for the Religion of Islam, considering it one of the divine religions that came with great human principles kidnapped by radical groups.

(You can read the longer narrated transcript of the President’s discussion with the Saudi Prince here.)

Hopefully, this meeting is just a taste of what is to come as President Trump’s foreign policy continues to take shape. More productive conversations like this one will go a long way towards easing the minds of Trump-skeptic Americans who worry that the President may not have the temperament or the foreign policy knowledge needed to do his job well.

But there is one thing left to worry about; will the Judges of the 9th Circuit Court throw Saudi Prince Mohammed Bin Salman in jail for calling President Trump a true friend of the Muslims?