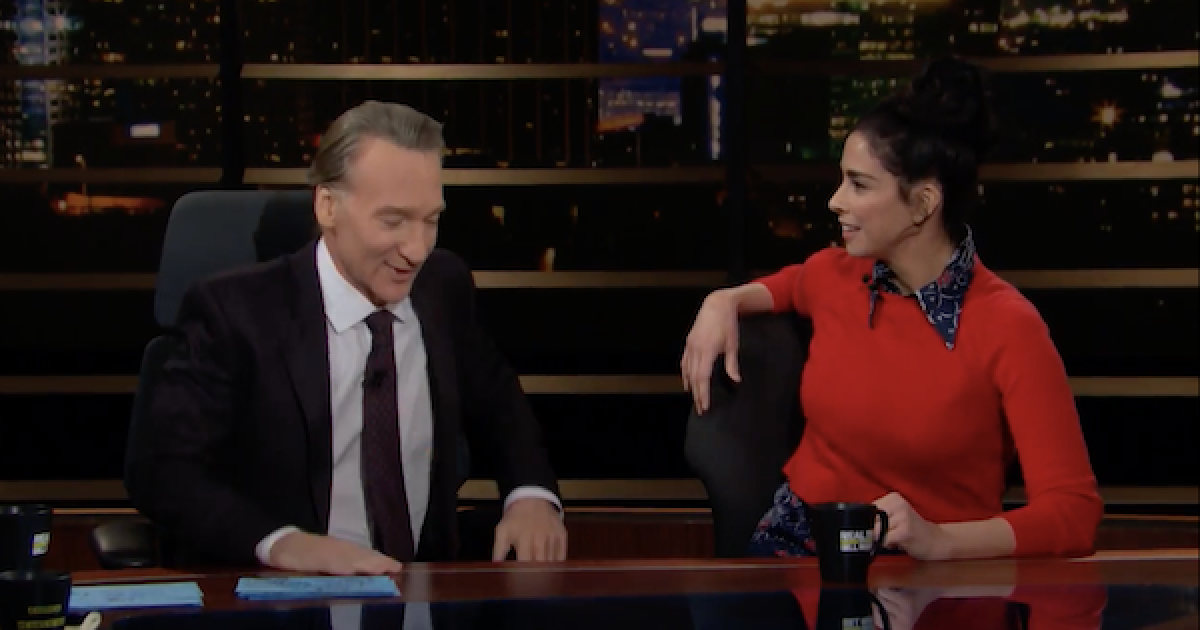 At a time when the country is begging for a more civilized dialog between different political persuasions, Sarah Silverman appeared on HBO’s “Real Time with Bill Maher,” and told lies about President Trump. After Bill Maher congratulated  Silverman for receiving a star on the Hollywood Walk of Fame, Silverman said:“You know, in a time, Bill, where anti-Semitic crime is up 57 percent since this douchebag has taken office, it is not lost on me that I am very lucky that I get a star and I don’t have to sew it on my clothes.” (video below)

As a Jew, I feel extremely fortunate that Silverman doesn’t put a star on her clothes because I would hate to have it shoved into people’s faces that someone who is that stupid is also Jewish.

If there is anything as bad as Antisemitism is when people make the charges of Jew-hatred when it’s not true.  It makes it much easier for people to deny the charge when it is true.

It’s one thing to disagree with Trump’s policies or even his demeanor as POTUS, it’s another thing to falsely claim he exhibits something as vile as Antisemitism. On these pages, it’s been demonstrated many times that Donald Trump NOT anti-Semitic, in fact, he is the most pro-Jewish president in my lifetime. And that’s his policies. Beyond that his daughter, son-in-law, and grandchildren are Jewish.

Even before he was elected president, Trump was very generous in donating to Jewish Organizations, and that’s how he earned the honor of being grand marshal of the Israel Day parade. In Jewish charities, typically the highest honors go to the biggest donors. Trump counts Jews among his circle of friends, including Israeli Prime Minister Netanyahu and New England Patriots owner Robert Kraft.

No president before Trump worked to stop the UN from slamming Israel for made-up human rights abuses. Trump canceled the JCPOA Iran deal which threatened to destroy the Jewish Homeland, defended Israel in the wake of the Hamas-led Gaza, and was the first President to keep his promise of recognizing Jerusalem as Israel’s capital and move the US Embassy to Jerusalem.

As for the ADL’s count of a 57% increase in anti-Semitic incidents Silverman quoted…it’s a bogus study:

The study does not actually claim to count “anti-Semitic incidents,” as such but rather the reporting of these events. First, it purports to count those incidents that have been reported to the ADL by the media, law enforcement, and the public. The ADL acknowledges that some of the increase in documented incidents is not an actual increase, but results from “more people . . . reporting incidents to ADL than ever before.”

Second, the report does not count only actual anti-Semitic incidents, but any incident that results “in Jews perceiving themselves as being victimized due to their Jewish identity.” As a result of this methodological tic, the ADL’s tally includes 163 bomb threats made to Jewish Community Centers and other Jewish institutions in early 2017, even though the two perpetrators were not motivated by anti-Semitism.

Most of those bomb-threat calls were made by an Israeli-Jew. His calls were international in nature, he made over 2,000 bomb threat calls to North America, Britain, Australia, New Zealand, Norway, and Denmark The other bomb threat-maker was a Juan Thompson, a former Intercept writer from Missouri who made only eight of the bomb threats. Thompson’s threats weren’t motivated by Antisemitism, he was trying to terrorize an ex-girlfriend.

It would probably be too much to ask for Sarah Silverman to know what she is talking about before she opens her mouth. For one thing, it would assume she knows how to read (or knows how to think).

If Sarah Silverman really cared about anti-Semitism why was she quiet during the eight years Barack Obama’s anti-Semitic administration? And why does so much of her humor put down the Jewish people as money-hungry, or committing deicide?

Sarah Silverman either doesn’t care about the truth or is too much of an imbecile to understand the facts. Truth be told she wouldn’t know anti-Semitism if an anti-Semite met her on the street, jumped in the air and did summersaults and kissed her on the lips on the way down.

Watch the video below of Silverman on “Real Time:”