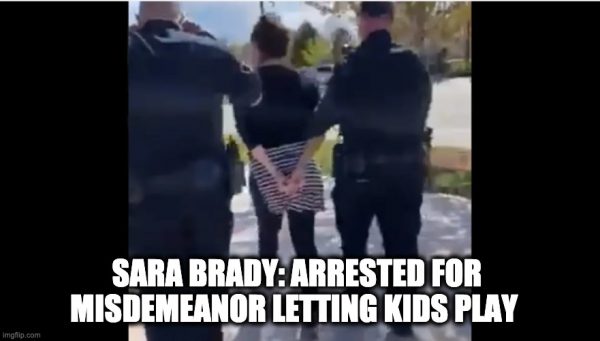 The media telling us for years that Orange Man Bad is an authoritarian puppet of Putin and ‘literally Hitler’ just created an environment where REAL authoritarians thrive. Sara Brady

They leveraged a crisis to create a panic. When enough citizens become terrified lemmings look for a Savior and turn to the State for Guidance, opportunities abound for the State to trample our rights in the name of the ‘greater good’.

With ZERO consideration of the broader consequences.

In some cases, the fear of the pandemic led to the mass dumping of convicts into the general population, without consideration of what happens to them, and their communities, when they get out there if there are no jobs to be had. De Blasio seemed genuinely confused about why people he had just released were arrested for committing new crimes.

We see elites — talking heads on TV, no less! — who are COVID-positive breaking quarantine with impunity, but demanding that the hammer be brought down on ‘little people’ who want nothing more than the right to keep going about their lives.

On the other end of the spectrum, parents of kids (among the LOWEST risk group for serious complications of this virus) are being led away in handcuffs for doing less to endanger the community than Cuomo or Stephanopoulos ignoring their quarantine.

Her crime? According to the Meridian, Idaho Police Department:

After receiving several calls to Ada County Dispatch, Meridian Police responded to Kleiner Park on April 21 2020 at around 3:50PM. Upon arrival, officers saw that metal signage and caution tape announcing the playground closure due to COVID-19, was removed. Additionally, officers observed numerous individuals gathered on the closed playground area. Officers informed those gathered several times that the play structure was closed, and that they were welcome to utilize other areas of the park if they chose. After being told to leave the playground multiple times, forty (40) year old Sarah BRADY of Meridian refused to leave and was arrested for one (1) count misdemeanor trespassing.

Meridian officers made several attempts to help BRADY adhere to the rules. She was non-compliant and forced officers to place her under arrest to resolve the issue. She was arrested for trespassing.

These are very trying times and the Meridian Police Department supports the public’s right to assemble for peaceful protest, however the right does not include damaging public property or ignoring closures of City property and facilities.

This mom, named Sara Brady,  was led away in handcuffs for … letting children play in the park on a sunny day.

This has gotten out of control

Stop arresting free Americans for being outside with their families

Adding to the confusion are press releases like this one;

Yes it’s true, Sara Brady broke the rules, so did all the other mothers there with their kids. Why couldn’t she just get a ticket? I am sure it was some political higher-up that told the press to handcuff a mother in front of her children and lead her away. Most police have much more sense than arresting a 40-year old Mom for letting her kids play on the public monkey bars.

This crisis has proven that our politicians have weird priorities. They arrest a Mom on a playground but keep the world safe from WuFlu by releasing sex offenders into the public.

When the dust clears from this insanity, and we see just how power-mad it has made some of our elected — and unelected — government officials, there is going to be HELL to pay.