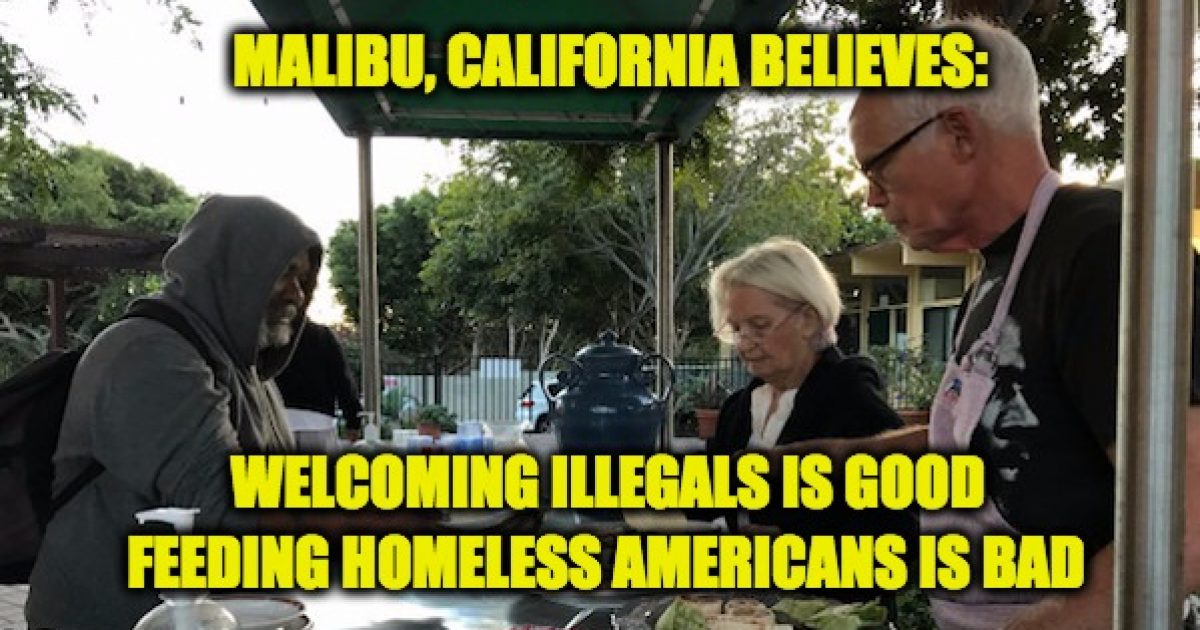 Malibu, California, just issued a demand to a Christian church telling officials there to stop feeding homeless people once a week, but this same city is quite proud of itself for being a so-called “sanctuary city.” Meaning, the city fathers of Malibu don’t mind illegal foreigners streaming into their city, but they don’t want to feed homeless Americans.

Isn’t that an outrageous contradiction?

Last week the Malibu United Methodist Church was told to close its kitchen where every Wednesday it hosted a meal for the area’s homeless, according to KCBS.

“Yeah, it’s a safe place here and everybody is welcome,” said Micah Johnson, a homeless man who has been grateful for the church’s meals. “The food is really good. It is home cooked and a lot of TLC involved.”

Church officials reported that they have fed the homeless since 2014 and lately have been feeding up to 80 people each week.

The church worker said she fears that many of the people who usually eat at her kitchen will forage through dumpsters when they aren’t eating at the church.

But the city wants it all to stop. Why?

“We were asked, very succinctly,” volunteer Dawn Randall said of a meeting with the city. “They claim we are responsible for increasing the homelessness.”

Apparently, the town officials are upset that the church draws more homeless people to the city merely because of the weekly meals.

The church worker said she fears that many of the people who usually eat at her kitchen will forage through dumpsters when they aren’t eating at the church.

But the city wants it all to stop. Why?

“We were asked, very succinctly,” volunteer Dawn Randall said of a meeting with the city. “They claim we are responsible for increasing the homelessness.”

Apparently, the town officials are upset that the church draws more homeless people to the city merely because of the weekly meals.

A church meal that feeds a paltry 80 people “increases the homeless”?

OK, let’s take that as a given. Let’s accept their logic. But, the city is also proud that it is a so-called “sanctuary city” allowing criminal illegals to live inside its borders without fear of deportation.

In March of this year, the city fathers of Malibu proudly followed the lead of extremist, left-wing actor Martin Sheen who in December spoke at a city meeting to urge the city to protect the criminal illegals among them.

Firstly, Malibu is 92 percent white. So, the illegals the city cited as those they want to “protect” are local illegals who work for the rich folks as nannies, gardeners, and menial laborers.

This elitist situation was so absurd that some local detractor of the measure went to the expense of posting a satirical sign ridiculing the city’s sanctuary city vote.

Some infuriated citizen added a placard to the city limit sign that read, “Official Sanctuary City ‘Cheap Nannies and Gardeners Make Malibu Great!’ (Boyle Heights Not So Much).”

The sign — while very funny — made city officials furious.

“This was not an official city sign,” Malibu Councilwoman Laura Rosenthal told the L.A. Times. “It’s down, and it’s very disheartening that anyone would put up such an ugly sign.”

OK, let’s review. The city of Malibu is proud of its status as a sanctuary city status and is furious at anyone who ridicules that status.

So, let’s now circle back around to the story of the church and its homeless kitchen. Remembering that Malibu is 92 percent white and that the sanctuary status is to protect their gardeners and nannies… so, who does that leave to partake of the church meals? No less than those few American citizens in Malibu who are homeless.

What does this all mean? No less than that the city elites are fine with allowing illegals to break our laws as long as they are servants to the town’s rich folks. Yet, they don’t want to feed hungry Americans.

Then there is this final point. The city doesn’t seem to grasp logical disconnect inherent in these two situations. If they think a program that feeds homeless people is somehow at fault for drawing homeless people to the town, how do they not understand that a sanctuary city program is a draw for lawbreakers?

But, if you want “white privilege,” the liberals who infest the city of Malibu are the perfect example of it. After all, look at what they are doing here. They are chasing out hungry American citizens while laying out the welcome mat for the illegals whose only value is as their gardeners, nannies, lawn care workers, and pool boys.

Could there be any better example of liberal hypocrisy?