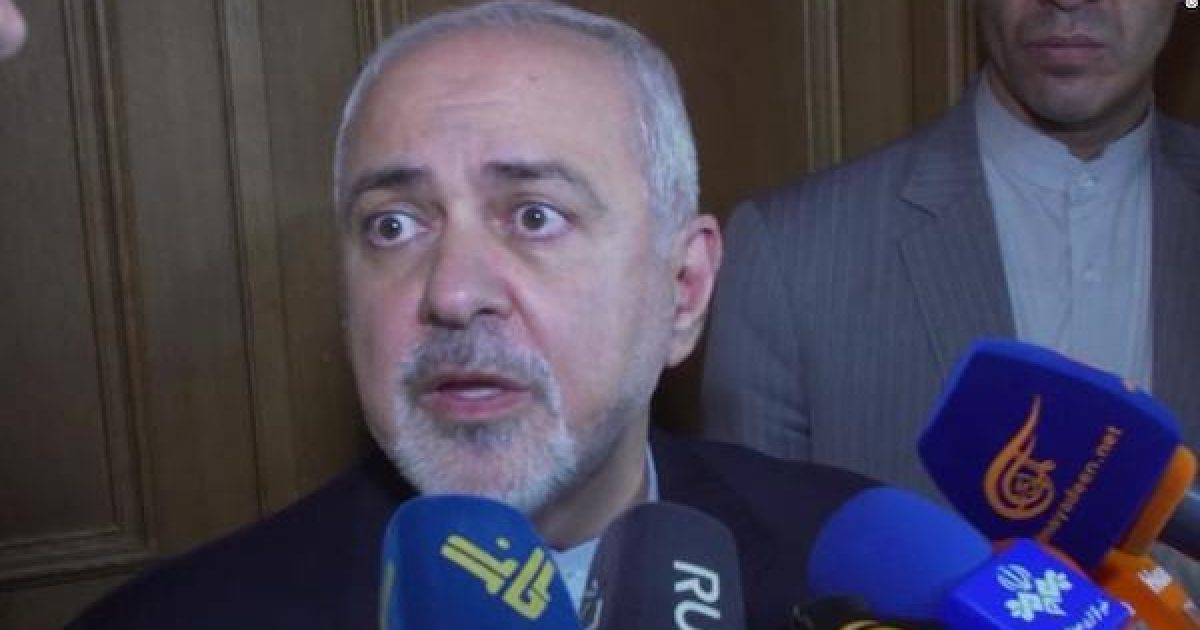 The Trump administration announced Wednesday that they are imposing sanctions on Iranian Foreign Minister Mohammad Javad Zarif in a move to further tighten the screws on the rogue regime in an attempt to pressure them into negotiations.  The U.S. said Zarif who negotiated the failed JCPOA for Iran, acts on behalf of Ayatollah Ali Khamenei, who was previously sanctioned.

At the time order #13879 was issued the administration said it was planning to sanction Zarif. A senior administration official speaking on the condition of anonymity explained the delay on designating Zarif was because such a “highly unusual action” takes time to finalize.

The same official, said, “far too long he has been indulged as the reasonable and credible face of Iran, and today President Trump decided enough is enough. Adding that Zarif’s office functions as an extension of the Supreme Leader’s office and the Islamic Revolutionary Guard Corps,” the elite Iranian military unit designated as a foreign terrorist organization.

Much of the mainstream media will probably complain that sanctioning Iran’s chief diplomat will destroy all possibility of talks between the US and Iran. The official explained that Zarif is not “our primary point of contact,”  because he’s not the decision-maker. Echoing something Secretary Pompeo said so in an interview last week.

“Foreign Minister Zarif is no more in charge of what’s going on in Iran than a man in the moon. At the end of the day, this is driven by the ayatollah. He will be the ultimate decision-maker here.”

Despite the way he is described by the MSM Zarif is no moderate. For example, during a June press conference, he defended Iran’s executions of Homosexuals.

“Why are homosexuals executed in Iran because of their sexual orientation?” asked Paul Ronzheimer, the Berlin-based chief correspondent for the tabloid Bild.

Zarif, who conducted the press conference alongside his visiting German counterpart, Heiko Maas, responded that his “society has principles.” “And we live according to these principles. These are moral principles concerning the behavior of people in general,” he continued. “And that means that the law is respected and the law is obeyed.”

In a statement, Secretary of State Pompeo emphasized that despite sanctioning Zarif the Trump Administration seeks to negotiate with Iran.

This action represents another step toward denying the Iranian regime the resources to enable terror and oppress the Iranian people.  Instead of using Iran’s precious resources to invest in the brave and rightfully proud people of Iran, the Iranian regime facilitates and supports terrorism, jails and tortures innocent Iranians, fuels foreign conflicts in Syria and Yemen, and, in recent weeks, has expanded its nuclear program.  Foreign Minister Zarif, a senior regime official, and apologist has for years now been complicit in these malign activities.

The United States continues to seek a diplomatic solution that addresses the Iranian regime’s destructive behavior.  The only path forward is a comprehensive deal that addresses the full range of its threats.  Until then, our campaign of diplomatic isolation and maximum economic pressure will continue.

“Javad Zarif implements the reckless agenda of Iran’s Supreme Leader and is the regime’s primary spokesperson around the world.  The United States is sending a clear message to the Iranian regime that its recent behavior is completely unacceptable. At the same time, the Iranian regime denies Iranian citizens’ access to social media, Foreign Minister Javad Zarif spreads the regime’s propaganda and disinformation around the world through these mediums.”

What today’s actions mean is that all property and interests in property of Zarif that are in the United States or in the possession or control of U.S. persons must be blocked and reported to Office of Foreign Assets Control (OFAC) which is the part of the Treasury Dept. that manages sanctions.  Generally, OFAC prohibits all dealings by Americans involving any property or interests in property of the sanctioned person, in this case, Zarif.

Also, anybody who does business with Zarif after today’s announcement may bring the same sanctions down upon themselves.

After the announcement, Zarif did his best imitation of the “Black Knight” in Monty Python and the Holy Grail after he had his arms cut off. “It’s just a flesh wound,” said the knight. Zarif tweeted

The US' reason for designating me is that I am Iran's "primary spokesperson around the world"
Is the truth really that painful?
It has no effect on me or my family, as I have no property or interests outside of Iran.
Thank you for considering me such a huge threat to your agenda.

So far there has been no reaction about the move from Zarif ally John Kerry, who secretly met with Zarif in 2018 advising him how to save the flawed JCPOA.