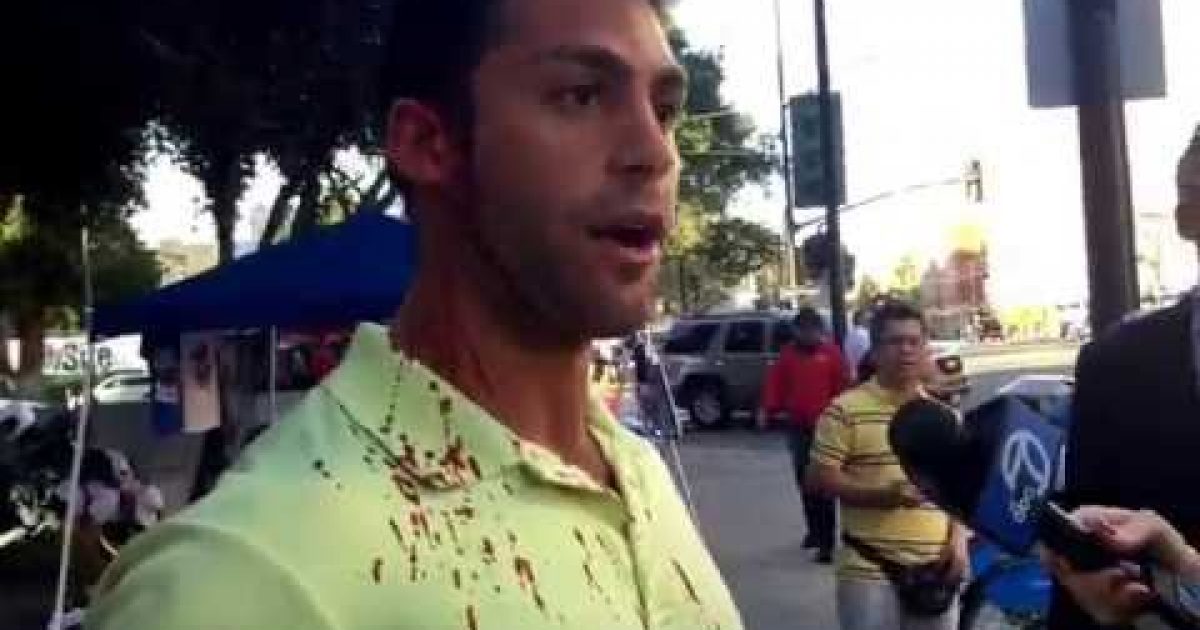 The profoundly peaceful and law-abiding Tea Party movement was treated as a proto-fascist army of vigilantes while the Occupy movement was seen as a heartwarming expression of authentic people power. Never mind that violence was far more endemic to the Occupy movement. Left-wing youth, particularly minority youth, who threaten and intimidate people and destroy property, are seen as expressing their righteous passion. Right-wing youth who do likewise are terrifying harbingers of fascism and authoritarianism. – Jonah Goldberg in the National Review

Last week GOP presidential candidate Donald Trump held a rally in San Jose, California. While the rally was the usual presidential boilerplate, it eventually made national news thanks to what transpired after the rally concluded. Once the event ended and the Trump supporters began filing out of the arena and heading home, a raucous and (apparently) violent anti-Trump crowd began verbally and physically assaulting the rally-attenders. The vile protesters hurled insults, foul language, spit, vitriol, and hate… and eventually they began throwing eggs, rocks, punches, and kicks as well.

Throughout it all the San Jose Police Department did… NOTHING. Only 4 protesters were arrested even though (as Twitter, Facebook, and YouTube all show) the violence was far more widespread and dozens of Trump supporters were viciously harassed.

Now the San Jose PD is defending its inaction and arguing that they did nothing wrong when they chose not to protect the innocent Republican crowd.

On Thursday, June 2, 2016, approximately 300-400 protestors gathered outside a Trump rally in San Jose. The San Jose Police Department designated two locations for supporters and demonstrators. The Department had an operations plan in place in an effort to ensure the safety of everyone attending the event. However, officers were confronted by some protestors who became violent, aggressive and began to throw objects in their direction. A majority of the violence occurred at the conclusion of the event.   While several physical assaults did occur, the police personnel on scene had the difficult task of weighing the need to immediately apprehend the suspect(s) against the possibility that police action involving the use of physical force under the circumstances would further insight the crowd and produce more violent behavior. As Trump supporters were exiting the Convention Center, officers directed the crowd away from the protestors and suggested alternate routes of egress in order to prevent violence or a large-scale confrontation. This required the forming of crowd control lines of uniformed officers to act as a physical barrier to facilitate the movement of the crowd out of the area. The San Jose Police Department subsequently made four arrests for incidents including assault with a deadly weapon and unlawful assembly. A San Jose Police sergeant suffered minor injuries after a protester struck him with a metal object. The Department is currently reviewing available footage and beginning the investigative process to identify suspects who were involved in criminal behavior, particularly physical assaults, so that warrants can be sought for their arrest. The Police Department encourages any members of the public who witnessed assaults or who are possession of video footage depicting physical assaults to contact the San Jose Police Department and cooperate with the ongoing investigations.

Police Chief Eddie Garcia must have felt as though his department was being maligned by the rest of America, because he chose to release a separate statement again defending his department but also promising that there would soon be further action taken against the criminal mob that assaulted so many innocent Trump supporters.

The violent behavior exhibited by some protestors last night was reprehensible, completely unacceptable and unrepresentative of our democracy and this City. We saw demonstrators behaving poorly and our officers clearing the streets as safely and expeditiously as possible. Officer safety and crowd control techniques are critical and cannot be abandoned when protestors scatter from area to area faster than the police lines can move.

Furthermore, de-escalation techniques are important—not just when someone has a weapon. We are not an “occupying force” and cannot reflect the chaotic tactics of the protestors. Instead, we achieved our goal of clearing the streets and making arrests in an appropriate manner. Our officers should be commended for both their effectiveness and their restraint.

Let me be clear: the violence that occurred last night was not unchecked. Four arrests have already been made, and I have immediately assembled a task force, headed by the Bureau of Investigations Chief Shawny Williams, and in coordination with the Santa Clara County District Attorney’s Office, to review all video evidence and investigate all reported assaults or other crimes from last night’s incident. I’m calling on the public as well as media outlets to submit all video evidence to our Police Department so we can root out those whose intentions were to disrupt our civil democratic process and put the safety and welfare of the public and my officers at risk. We will work tirelessly to hold them accountable and bring them to justice.