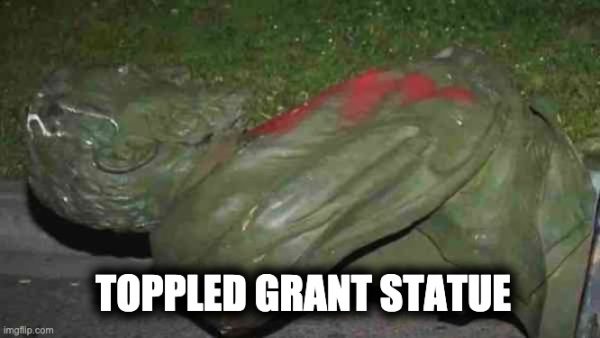 The liberal crazies are still going wild. In Portland on Thursday, they pulled down and defaced a statue George Washington, the father of our country. The anarchists moved a little south on Friday. The mob in San Francisco pulled down statues of Ulysses S. Grant, Francis Scott Key, and Father Junípero Serra, who is a Saint in the Catholic Church.  San Francisco statues

Ulysses S. Grant was not a perfect person and was the last US president to have personally owned a slave. However, two years before the Civil War, he emancipated that slave,  William Jones. Grant helped to free all the slaves as the general who led the Union armies in the defeat of the slave-owning Confederacy, enabling the end of the horrible practice of slavery in this country. When he was president, Grant advocated for the civil rights of former slaves, he helped ratify the Fifteenth Amendment, which gave blacks the right to vote. Grant also pushed through Congress legislation cracking down on the Democratic Party created Ku Klux Klan.

#BREAKING: Demonstrators topple statues in San Francisco's Golden Gate Park. @hurd_hurd will have details on our News at 11. https://t.co/RvmlMqu73s pic.twitter.com/iUZE28AvdD

They also knocked over the statue of Francis Scott Key, the author of the national anthem, “The Star-Spangled Banner,” who owned slaves and defended in court slaveholders’ rights to own humans.  The third statue taken down was Father Junípero Serra. Serra was an 18th-century Spanish missionary who is responsible for establishing the Catholic presence in colonial California and, according to some, abused the Native Californians who were converted at the mission. 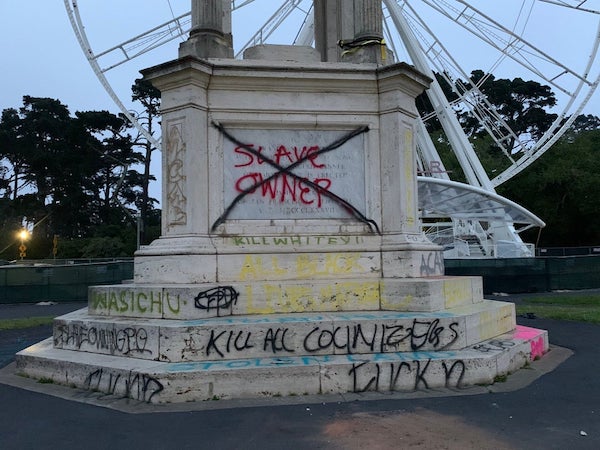 “There is very real pain in this country rooted in our history of slavery and oppression, especially against African-Americans and Indigenous people. I know that pain all too well. But the damage done to our park last night went far beyond just the statues that were torn down, and included significant damage to Golden Gate Park. Every dollar we spend cleaning up this vandalism takes funding away from actually supporting our community, including our African-American community. I say this not to defend any particular statue or what it represents, but to recognize that when people take action in the name of my community, they should actually involve us. And when they vandalize our public parks, that’s their agenda, not ours.

If we are going to make real change, let’s do the work with our impacted communities to make that change. To do that, I have asked the Arts Commission, the Human Rights Commission, and the Recreation and Parks Department and its Commission to work with the community to evaluate our public art and its intersection with our country’s racist history so that we can move forward together to make real changes in this City. Who and what we honor through our public art can and should reflect our values.”

That’s the problem with the anarchists pulling statues down. First, they are not honoring George Floyd, whose murder incited the protests. And as the Mayor said,  they were causing expenses the city couldn’t pay, and they were making decisions about which statues should bee standing in the San Francisco community without asking the San Francisco community. That is typical liberalism, even the crazies think they know better than the people and should make the decisions for everyone.