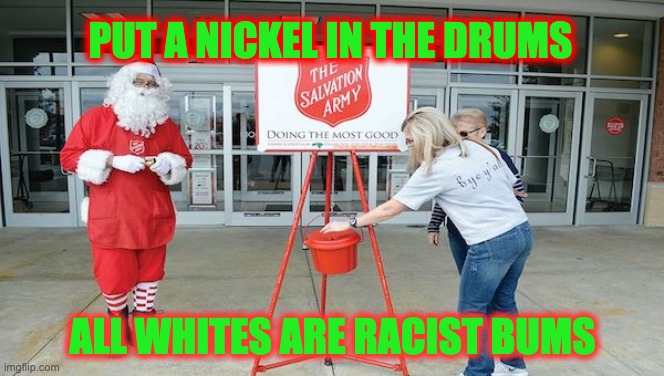 Here we go again.  The latest woke madness version of all Caucasians are racist comes from the Salvation Army.  They don’t want donations from white people who won’t sincerely apologize for being racist. The Charity seeks to embrace the ideas of Black Lives Matter, dismantle white privilege” and “disrupt the Western-prescribed nuclear family structure.”

According to Central Nova News, the Salvation Army has created an “International Social Justice Commission,” which has developed and released a “resource” to educate its white donors, volunteers, and employees called “Let’s Talk about Racism.”

In this program, the Salvation Army accuses Christianity of being “racist” and demands that all white people need to apologize for being irredeemable racists. This is a strange statement when compared to the organization’s stated mission:

The Salvation Army, an international movement, is an evangelical part of the universal Christian Church. Its message is based on the Bible. Its ministry is motivated by the love of God. Its mission is to preach the gospel of Jesus Christ and to meet human needs in His name without discrimination.

But if you follow the faith, you are a racist?Even SANTA????

Many have come to believe that we live in a post-racial society, but racism is very real for our brothers and sisters who are refused jobs and housing, denied basic rights and brutalized and oppressed simply because of the color of their skin,” one lesson explains. “There is an urgent need for Christians to evaluate racist attitudes and practices in light of our faith, and to live faithfully in today’s world.”

In an accompanying Study Guide on Racism, Salvation Army authors explain that all whites are racist, even if they don’t realize it.

“The subtle nature of racism is such that people who are not consciously racist easily function with the privileges, empowerment and benefits of the dominant ethnicity, thus unintentionally perpetuating injustice,” it says.

“Sunday school curriculum that only uses white photography and imagery” is an example given that perpetuates injustice.

“We must stop denying the existence of individual and systemic/ institutional racism. They exist, and are still at work to keep White Americans in power,” the lesson says.

It looks like it is time to stop donating to the SA.

After all, why should white people give money to a charity that thinks they are all evil, no good, irredeemable racists?

Karen Townsend has more details of this story at Hot Air, click here and give it a read you will find it very interesting.