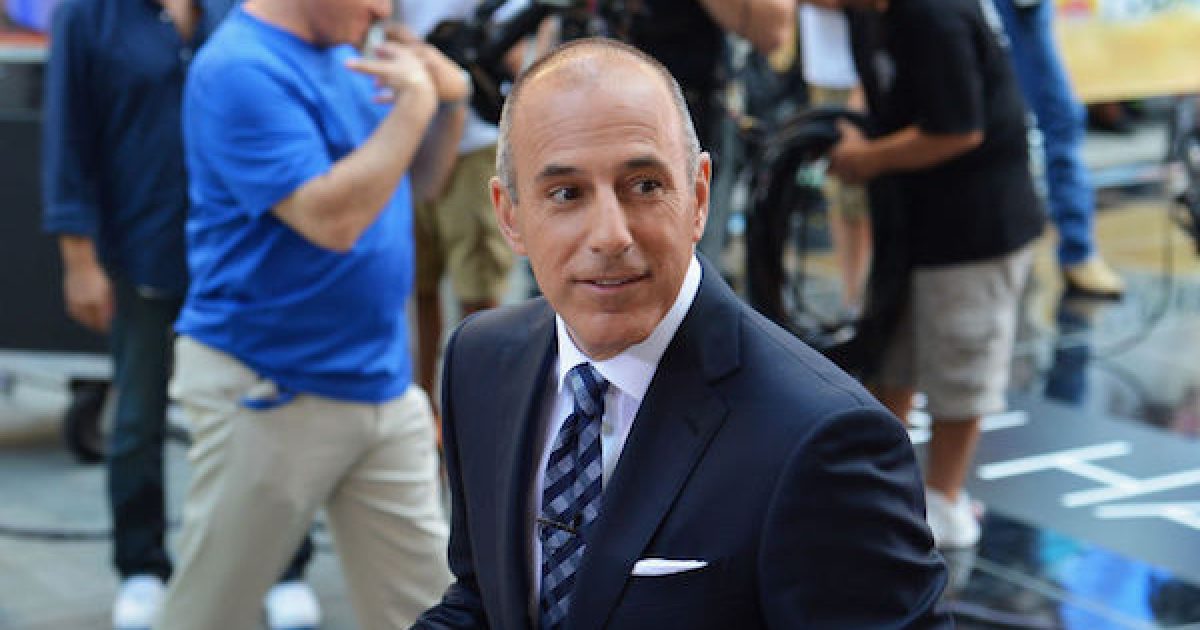 NBC’s Today Show anchor Matt Lauer was fired Tuesday night after he was accused of sexual misconduct. The details of that incident and others are beginning to seep out and they are very salacious.

TMZ is reporting that Lauer not only exposed himself to a co-worker but gifted another one a sex toy. However, it appears that those instances are simply a scratch on the surface of the accusations against him.

The former “Today” co-host also allegedly enjoyed playing the game “F**k, Marry, Kill” in regards to his female co-hosts at NBC. The bombshell allegations came out in a Variety investigation.

One woman says Lauer once delivered a sex toy to a female co-worker, and attached an explicit note … detailing how he’d use it on her. Several accusers claim his office was ground zero for much of the sexual misconduct. For instance, he allegedly called a female employee into his office … dropped [trousers], and flaunted his penis.

TMZ also got a hold of a video where then-co-host Meredith Vieira is leaning over to get something off a table in front of Lauer and he creepily whispers to her “Keep bending over like that. It’s a nice view”

According to Variety, the immediate cause of his dismissal, “according to sources, was a detailed complaint from another current NBC employee about inappropriate sexual conduct from Lauer that started on a trip at the Sochi Olympics in 2014 and continued for several months.”

Variety also talked to several women who complained to higher-ups about Lauer’s inappropriate behavior to no avail.  Today is a very profitable property for NBC and they probably didn’t want to upset the goos-er who laid the golden eggs.

Despite being married, Lauer was fixated on women, especially their bodies and looks, according to more than 10 accounts from current and former employees. He was known for making lewd comments verbally or over text messages. He once made a suggestive reference to a colleague’s performance in bed and compared it to how she was able to complete her job, according to witnesses to the exchange. For Lauer, work and sex were intertwined.

“There were a lot of consensual relationships, but that’s still a problem because of the power he held,” says a former producer who knew first-hand of these encounters. “He couldn’t sleep around town with celebrities or on the road with random people, because he’s Matt Lauer and he’s married. So he’d have to do it within his stable, where he exerted power, and he knew people wouldn’t ever complain.”

Even former co-host Katie Couric wasn’t free from his abuse. In the clip below she was asked what was Lauer’s most annoying habit when they worked together. Her answer was that he pinched her in the ass a lot.

According to sources, the sexual harassment extended to when Lauer traveled on assignment for NBC. Several employees recall how he paid intense attention to a young woman on his staff that he found attractive, focusing intently on her career ambitions. And he asked the same producer to his hotel room to deliver him a pillow, according to sources with knowledge of the interaction.

This was part of a pattern. According to multiple accounts, independently corroborated by Variety, Lauer would invite women employed by NBC late at night to his hotel room while covering the Olympics in various cities over the years.

Matt Lauer has also been accused of sexting female staffers at NBC, allegedly sending lewd messages and revealing pictures to women including a young intern.

Sources tell Page Six that the reason he was fired so quickly by NBC News is that the messages, saved by an NBC employee whom he approached while they were in Sochi, Russia, for the 2014 Winter Olympics, “showed incontrovertible proof of inappropriate sexual behavior on his part.”

A source told Page Six, “There’s at least one picture [sent to her by Matt] which was a major part of the evidence, which is why the firing came so quickly … my understanding was it was so damning that it was unquestionable whether or not he should be fired.

However wrong, the fact that Matt Lauer was the network’s cash cow provided news division boss Andy Lack the incentive to cover up for Lauer until his salacious bullying was about to be revealed by other news operations. Even worse, Lauer’s power and the appearance of invulnerability generated by the management covering for him kept his victims silent as they feared professional repercussions.

This isn’t the end of the Lauer story, the New York Times tonight told the story of two other women targeted by Lauer. One described an incident in his office:

In 2001, the woman said, Mr. Lauer, who is married, asked her to his office to discuss a story during a workday. When she sat down, she said, he locked the door, which he could do by pressing a button while sitting at his desk. (People who worked at NBC said the button was a regular security measure installed for high-profile employees.)

The woman said Mr. Lauer asked her to unbutton her blouse, which she did. She said the anchor then stepped out from behind his desk, pulled down her pants, bent her over a chair and had intercourse with her. At some point, she said, she passed out with her pants pulled halfway down. She woke up on the floor of his office, and Mr. Lauer had his assistant take her to a nurse.

On Wednesday, the episode in Mr. Lauer’s office was reported to NBC News after the woman told her then-supervisor, who still works at the network. The woman said an NBC human resources representative had since contacted her.

The woman, who was in her early 40s at the time, told her then-husband about the encounter, which The Times confirmed with him in a phone call. The couple was separated at the time, and later divorced. She also described it to a friend five years ago, which the friend confirmed to The Times.

Who’s next? Something tells me that the revelations of the past few weeks aren’t the end of these type reports or even the middle. Fasten your seatbelts folks, there is probably much more workplace sexual harassment revelations to come.