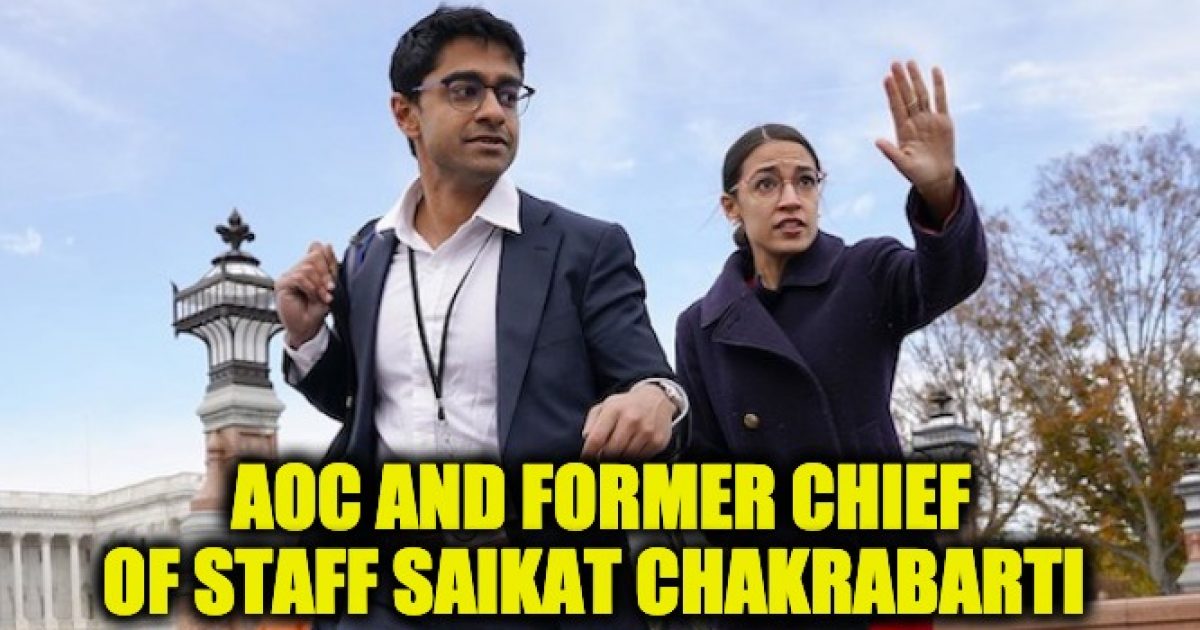 In March 2019 we reported that Rep. Alexandria Ocasio-Cortez’s chief of staff Saikat Chakrabarti ran $1M slush fund by diverting campaign cash to his own companies. Almost five months later, he suddenly resigned and the news broke that the feds are looking into possible campaign finance misdeeds related to that March report.

Chakrabarti reportedly funneled more than $1 million in political donations from two political action committees he founded into two of his own private companies in a scheme to divert campaign money so it won’t have to be reported.  A complaint about the diversion scheme was by the National Legal and Policy Center,  They contended the transfers violated the law because PACs must disclose what those funds were used for – such as advertisements, payments to vendors and donations to candidates. The private companies Chakrabarti moved the money to are not subject to those requirements]

“One is the scam PAC possibility — they’re really just paying themselves and they’re concealing it by using the LLC. The other is that there’s actually another recipient, that the money is going to the LLC and then being disbursed in some other way that they want to conceal.”

As reported by the Washington Examiner at the time:

Two political action committees founded by Rep. Alexandria Ocasio-Cortez’s top aide funneled over $1 million in political donations into two of his own private companies, according to a complaint filed with the Federal Election Commission on Monday.

The cash transfers from the PACs — overseen by Saikat Chakrabarti, the freshman socialist Democrat’s chief of staff — run counter to her pledges to increase transparency and reduce the influence of “dark money” in politics.

Chakrabarti’s companies appear to have been set up for the sole purpose of obscuring how the political donations were used.

The arrangement skirted reporting requirements and may have violated the $5,000 limit on contributions from federal PACs to candidates, according to the complaint filed by the National Legal and Policy Center, a government watchdog group.

Campaign finance attorneys described the arrangement as “really weird” and an indication “there’s something amiss.” They said there was no way of telling where the political donations went — meaning they could have been pocketed or used by the company to pay for off-the-books campaign operations.

According to Tom Anderson, director of NLPC’s Government Integrity Project, “These are not minor or technical violations. We are talking about real money here. In all my years of studying FEC reports, I’ve never seen a more ambitious operation to circumvent reporting requirements. Representative Ocasio-Cortez has been quite vocal in condemning so-called dark money, but her own campaign went to great lengths to avoid the sunlight of disclosure.”

According to the NY Post, the NLPC’s has led to a result:

In March, when the FEC complaints were filed, a lawyer for the PACs, the LLCs and the Ocasio-Cortez campaign told the Washington Post that the arrangement “fully complied with the law and the highest ethical standards” and that Chakrabarti never profited from any of the political entities he formed.

They may also have violated the $5,000 limit on contributions from federal PACs to candidates, according to the complaint. It is not known if any of that money flowed to Ocasio-Cortez’s campaign.

Federal authorities are looking at new salary rules imposed by Ocasio-Cortez when she took office earlier this year, and whether they were put in place to let Chakrabarti dodge public financial-disclosure rules, according to sources.

Although Ocasio-Cortez raised the salaries of junior staffers in her office to just over $52,000 a year, Chakrabarti took a massive pay cut. The Harvard graduate and tech millionaire agreed to an annual salary of $80,000 — far less than the $146,830 average pay for his position.

Because his salary was less than $126,000, congressional rules exempted the chief of staff from having to disclose his outside income.

Is this investigation the reason Saikat Chakrabarti suddenly resigned on Friday?

Pelosi claims we can't focus on impeachment because it's a distraction from kitchen table issues. But I'd challenge you to find voters that can name a single thing House Democrats have done for their kitchen table this year. What is this legislative mastermind doing?

It may be strange that after five months, the FEC is finally investigating Saikat Chakrabarti. One theory is that Nancy Pelosi may be behind the FEC, finally launching an investigation.  Perhaps getting rid of Chakrabarti is her way of controlling AOC.