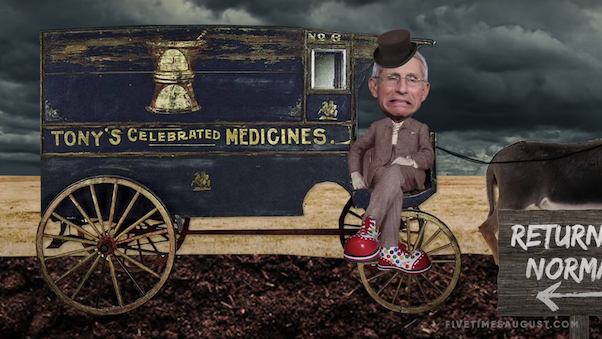 Incidents like this are why I now call Big Tech companies the “Silicon Valley Axis of Evil.”  On Tuesday, Twitchy reported that the leftists at YouTube censored a song called “Sad Little Man” for “medical misinformation.”  We’re not sure what medical information is involved, but we do know one thing — it shreds Dr. Anthony Fauci for his non-stop flip-flops, lies, and his record.

Here’s just a sample of the lyrics:

Sad little man sitting deep in a lie
He’s dead in his soul but he’ll keep you alive
Do what he says, not what he do
‘Cause the truth is for him and the lie is for you

Sad little man but he’s treated like a God
As the faithless pray to a fake and a fraud
Worship the man, pledge to his word
One shot, two shot, now you get a third

The song doesn’t explicitly mention COVID-19 directly or any specific medical terminology but YouTube demonetized it for “containing medical misinformation.”

“Sorry for any confusion — the video is ineligible for full monetization due to the content (which includes metadata) containing Medical Misinformation. Medical Misinfo is a policy that’s part of Dangerous and Harmful acts. Hope this helps clarify!” @TeamYoutube tweeted last week.

Sorry for any confusion — the video is ineligible for full monetization due to the content (which includes metadata) containing Medical Misinformation. Medical Misinfo is a policy that's part of Dangerous and Harmful acts. Hope this helps clarify! https://t.co/bzzFEFJXZM.

Of course, we all know what is really going on — YouTube doesn’t want any criticism of Joe Biden’s buddy, Anthony “I am Science” Fauci.  In much the same way citizens of the former Soviet Union weren’t allowed to criticize their leaders.

“Just as the video was reaching peak traffic I started receiving user comments about how difficult the video was to find and that it was not appearing in search results. … It wasn’t until I called YouTube out publicly on Twitter did the original upload magically appear back in search results but Google/YouTube never explained or gave reason to any of this and who knows how many views and potential subscribers I lost due to this,” songwriter and Five Times August member Brad Skistimas told The Federalist.

“I won’t be making much, if any, off of monetization through ads, which is a substantial source for content creators on the platform,” he added. “The first several days the video was accepted with full monetization, then after a manual review they marked it for limited ads due to ‘medical misinformation’ – which if you watch the video – can see there’s no way to clearly define what that misinformation is.”

It doesn’t @TeamYouTube . I have asked your team via email several times what specific medical misinformation is in my video and nobody will specify. This is clear discrimination and suppression against art and your content creators. Explain yourselves https://t.co/0H43TcEbJk pic.twitter.com/R4lOVmC4V3

The group responded to the action using Fauci’s own words:

If Fauci was to ever hear my song “Sad Little Man” and criticize it I would respond back with “you’re not really criticizing the song, you’re criticizing all music, because I represent music.” ? pic.twitter.com/sLBK55umux

Here’s the video, which has already been viewed over 310,000 times: