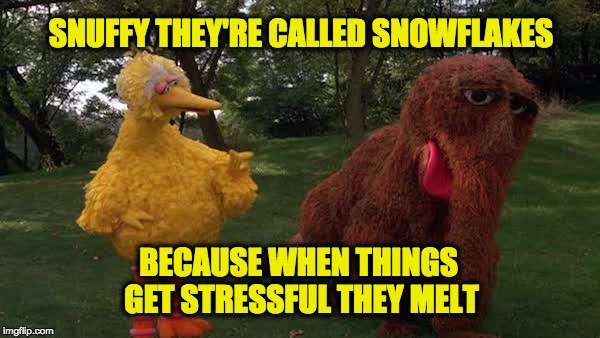 One wouldn’t expect this to happen in New Jersey, where talking about the home of the Sopranos, Jersey Shore, and Chris Christe. But as the left continues their assault on American culture, the trend toward outlawing offensive thoughts has become a central focus for liberals everywhere, including Rutgers University.

The big picture concerns here are fundamentally about the First Amendment.  The left would like the all-important right to free speech to be altered to include consequences for thoughts or statements that may hurt someone’s feelings or cause them to question their own beliefs.  In reality, it’s not freedom of speech that liberals actually want; it is merely freedom from speech.  Their ultimate goal would be the outlawing of any offensive statements, at any time, for any reason.

This ethos has never been more apparent than it is on college campuses in recent years, as administrators and student organizations alike continue to mandate equalization masquerading as equality.

The latest fight for free speech comes to us from Rutgers, where students are now being forced to fork over nearly $200 to undergo a “micro aggression” training module, furthering indoctrinating them with freedom-frying doses of liberalism.

“Thousands of students attending Rutgers University as a freshman this fall will be required to undergo a new form of sensitivity training, costing each student $175.

“At an orientation course entitled ‘Language Matters,’ microaggressions are the focal point. The Language Matters Campaign, organized by the university’s Center for Social Justice Education and LGBT Communities, teaches students about how to avoid hurting their peers intentionally or accidentally with their words. The material consists mainly of a handful of YouTube videos and a Prezi presentation titled, ‘The Big Impact of Little Things.’

“In addition, Language Matters also happens to have a training program on safe spaces, just incase the training on micro aggressions doesn’t stick and those with hurt feelings need a place of retreat.

“As stated in Reason, ‘The problem with microaggressions is they are entirely subjective. One person’s microaggression is another’s rude joke. While one person might laugh at the joke, another might feel uncomfortable.’

“Similarly, what one may perceive as a microaggression, may be considered a completely normal thing to say by someone else. A common example is asking where someone is from — a question often asked between freshmen in college who are new to campus and making friends.”

The problem with limiting the freedom of speech is that those limits completely negate the “freedom” part.

You do not have the right to not be offended.  That is just the absolute truth of the matter.  There is no reality in which your emotions can create a legal precedent in which we can, as a society, punish someone’s opinions.  Actions pertaining to offensive opinions, such as hate crimes, are certainly in need of attention, but we cannot stop bigotry or hatred by outlawing it.

Furthermore, we must examine the end-goal of the left.  Can we afford for these “micro aggression” obsessed snowflakes to dictate our opinions on any matter, let alone those that could have grave political consequences? Furthermore, should we fall victim to the normalization of the politically correct culture, the path to liberal tyranny becomes uncluttered by our American rights.