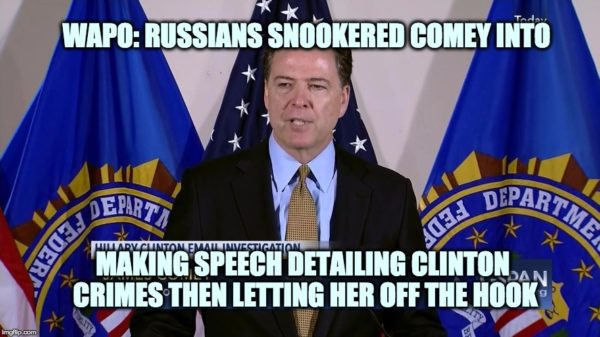 One of the reasons James Comey made his infamous public pronouncement that Hillary Clinton was probably guilty but no prosecutor would charge her was a secret Russian document describing an email indicating that the Justice Dept. would not try to hard to win the case against Ms. Clinton. According to a Report in the Washington Post the document was not only unreliable but possibly a Russian ruse “according to people familiar with its contents.” If true it means that Comey was snookered by the Russians to help Hillary.

According the report, the FBI received a Russian document that mentioned an email between Democratic National Committee Chairwoman Debbie Wasserman Schultz and Leonard Benardo, an official at George Soros’ Open Society Foundation.

In the email described in the document, he email Debby downer told Benardo that “then-Attorney General Loretta E. Lynch had privately assured a senior Clinton campaign staffer named Amanda Renteria that the email investigation would not push too deeply into the matter. If true, the revelation of such an understanding would have undermined the integrity of the FBI’s investigation.”

Current and former officials have said that Comey relied on the document in making his July decision to announce on his own, without Justice Department involvement, that the investigation was over. That public announcement — in which he criticized Clinton and made extensive comments about the evidence — set in motion a chain of other FBI moves that Democrats now say helped Trump win the presidential election.

In other words, Comey saw the fake document and thought to himself no one else will ruin the integrity of the FBI, that’s MY job.

But according to the FBI’s own assessment, the document was bad intelligence — and according to people familiar with its contents, possibly even a fake sent to confuse the bureau. The Americans mentioned in the Russian document insist they do not know each other, do not speak to each other and never had any conversations remotely like the ones described in the document. Investigators have long doubted its veracity, and by August the FBI had concluded it was unreliable.

Current and former officials have argued that the secret document gave Comey good reason to take the extraordinary step over the summer of announcing the findings of the Clinton investigation himself without Justice Department involvement.

Comey had little choice, these people have said, because he feared that if Lynch announced no charges against Clinton, and then the secret document leaked, the legitimacy of the entire case would be questioned.

But here’s the rub, the FBI got the document in March ’16, and from the time they got it there was an internal Bureau debate whether or not the report in the Russian doc was true and by the month after Comey’s July speech clearing Clinton “officials became more certain that there was nothing to substantiate the claims in the Russian document. FBI officials knew the bureau never had the underlying email with the explosive allegation, if it ever existed.” But that didn’t matter because all the way past the election the FBI used that Russian fraud whenever they had to justify their actions in the case.

Yet senior officials at the bureau continued to rely on the document before and after the election as part of their justification for how they handled the case.

Moreover, Wasserman Schultz, Benardo and Renteria said they have never been interviewed by the FBI about the matter.

But maybe they should have talked to the individuals in the email, because it most assuredly influenced Comey:

“It was a very powerful factor in the decision to go forward in July with the statement that there shouldn’t be a prosecution,” said a person familiar with the matter. “The point is that the bureau picked up hacked material that hadn’t been dumped by the bad guys [the Russians] involving Lynch. And that would have pulled the rug out of any authoritative announcement.”

Maybe Comey should have discussed it with is boss A.G. Lynch because according the post about a month after Comey decided the was the Attorney General and could let Clinton off the hook:

FBI officials asked to meet privately with the attorney general. At the meeting, they told Lynch about a foreign source suggesting she had told Renteria that Clinton did not have to worry about the email probe, because she would keep the FBI in check, according to people familiar with the matter.

“Just so you know, I don’t know this person and have never communicated with her,’’ Lynch told the FBI officials, according to a person familiar with the discussion. The FBI officials assured her the conversation was not a formal interview and said the document “didn’t have investigative value,’’ the person said.

The part that is hard to understand is why would the Russians try to help Clinton “get off.” After all according to intelligence they hated Hillary (even though she made Putin and his buddies millions of dollars in the Uranium One and Skolkovo deals.

“The idea that Russians would tell a story in which the Clinton campaign, Soros and even an Obama administration official are connected — that Russians might tell such a story, that is not at all surprising,” said Matt Rojansky, a Russia expert and director of the Kennan Institute at the Wilson Center. “Because that is part of the Kremlin worldview.”

Or perhaps they just wanted to have a laugh at the FBI Director’s expense.