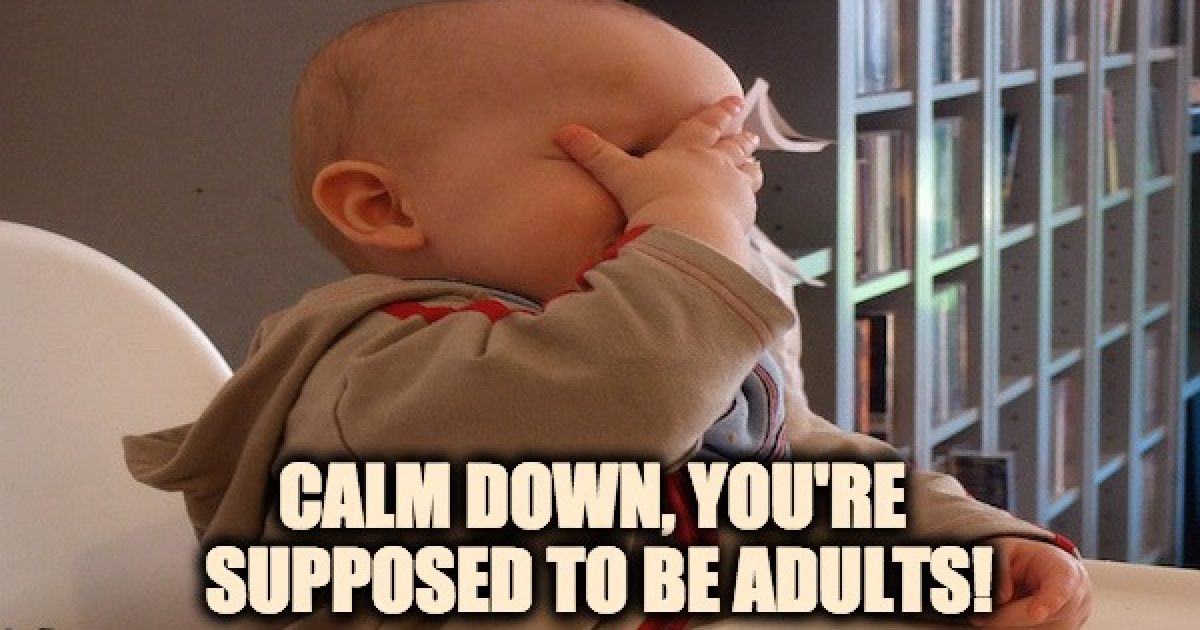 Astonishingly, the use of social media to promote political themes in the United States, for which a Washington, D.C. grand jury last week indicted 13 Russians, is now being compared – as an attack on America – to Pearl Harbor and 9/11.

I think most people are sensible enough to simply discredit this hyperventilation and move on.  But it’s important, before moving on, to register a couple of points about the Russian activity.

Each one starts with the reality that it is a serious matter, to know that Russia is trying to stoke political divisions among Americans.

Russia has been attempting to do that for an almost-uninterrupted period of 100 years now.

That’s basically one of the important points to remember.  If each new instance of it is a catastrophe on the order of the attack on Pearl Harbor or the felling of the Twin Towers, what does that make the last one?  Because the Russian attacks on our national psyche mounted through invidious political sloganeering and the exploitation of our own commitments to freedom of speech and thought, have been relentless for most of the last ten decades.

Let’s consider some illustrative examples.  Look at an FBI report from the 1980s on the then-Soviet exploitation of the self-anointed “peace movement” in the U.S. and the larger West, which focused on anti-nuclear advocacy and the idea of a “nuclear freeze.”

One need not agree with the premises of the left-wing “peace movement” – one may even argue that the “peace movement” usurped the word “peace” and arrogated it to itself without justification – to recognize that most of the foot soldiers in the movement were self-motivated.  They didn’t have to be duped by Soviet Russia, to disagree with others in the West on security policy.  They were well capable of seeing things their own way, without needing Soviet Communists to dictate their thoughts or slogans to them.

But that, in turn, didn’t mean that the Soviets were not linked to key organizations in the “peace movement.”  In fact, the Soviets did sponsor and organize many of the movement’s activities.  In some organizations, the entire leadership had longstanding connections to the Soviet Communist Party.

The Soviets used this connection with a movement that the West would have had anyway – because people are people, and they think and disagree for themselves – to agitate more effectively against Western policies and try to frustrate them.

In an April 1983 op-ed, columnist Jeffrey Hart quoted findings from the FBI report on these Soviet shenanigans.

“During the past two years, the Soviet Union has increased its efforts in the United States to exploit popular causes such as peace and disarmament.  The Soviets have initiated an active measure campaign designed to penetrate, influence and mobilize the U.S. peace movement and to discredit American defense and arms control and disarmament policies.”

Hart frames a point on which the FBI elaborated:

A principal instrument of the Soviet effort has been the World Peace Council, along with its spin-off, the U.S. Peace Council. …

Last year, the Soviets made an all-out effort to influence the June 12 demonstrations in New York City, and had a significant measure of success: “Soviet controlled organizations participated at the highest levels of the June 12 committee and exerted pressure to influence the June 12 committee to focus on U.S. nuclear policies as opposed to Soviet policies.  Of course, the Soviets also exploited this large demonstration in its worldwide propaganda campaign.”

See any familiar operational themes here?  Hart concludes with this:

The upshot of the FBI report is that not everyone in the anti-nuclear movement is a Soviet agent, but that in its political thrust the movement serves important Soviet policy goals, that the Soviets recognize this, and that they have both infiltrated and supported the movement.

If it’s an apocalyptic attack on America for Russian Internet trolls to use fake identities, post political memes on Facebook, and announce rallies to see who’ll show up for them, what was it when Soviet Russian instigators infiltrated a “peace movement” in America and literally wrote policy slogans for it and organized its public demonstrations?

In late 2017, writers at the Lawfare blog provided a telling summary of Soviet information operations against the U.S. after World War II:

Two years after the surrender of Nazi Germany, in 1947, Soviet leadership created the Committee of Information to run undercover operations to influence public opinion. In the 1950s, a specialized intelligence unit was established specifically to disseminate disinformation. In the 1970s, as disinformation became a larger part of the Soviet strategy, the unit was upgraded to a full service and placed under the command of a KGB general.

One of the most popular methods of disseminating disinformation targeted legitimate news outlets. By anonymously sending forged documents—such as embassy communications or military memoranda—to credible publications, the Soviets attempted to create well-timed fake news stories that the public accepted as true. Once the stories caught on, they were reprinted extensively in Soviet-controlled papers in the hopes that the story would be picked up by more mainstream sources—and would gain credibility in the process.

The Lawfare post goes on to recount how the Soviets exploited genuine political issues and social problems to foment greater divisions in American society.  The purpose was to weaken the U.S. and paralyze our policy institutions.  Again, the methods and themes are strikingly similar to what the Internet trolls have been doing.

Was that a protracted Pearl Harbor attack?  The issue here is not whether we should be concerned about it, but what kind of concern we should have, and how we should respond.

The very last thing we should do is let the “Internet trolls” operation be invoked as a crisis that necessitates Americans giving up our own rights, liberties, and constitutional principles.

I’m not even as concerned about the theme that “Russian trolls got Trump elected” as I am about the larger implications some political actors will read into the Russian-trolls narrative.

Most people understand what is intuitively obvious: that Trump gained a legitimate electoral college victory based on real, pre-existing political trends, in an America that is in political flux.  Attempts to undo the result of the 2016 election by pointing to some deeply silly things posted by Russians with fake user accounts – memes and articles seen before the general election by hardly any voters who hadn’t already made up their minds – will not go very far.

The important concern is that overhyping the Russian-trolls operation as a grand national crisis could be used to justify violating our constitutional rights.

We should, for example, of course, have the right to express political opinions with effective anonymity — even though Russian trolls can do it too.

The secret ballot is one of the most important ways we exercise that right, but it’s not the only one.  We can’t hide behind fake personas to label others or commit fraud, but we can certainly do so to express political opinions.  Protection from retribution for political opinions often requires effective anonymity, even in a free society.  The viability of intellectual freedom should not depend on the situational ability of individuals to withstand persecution, harassment, or attack.

Surveying what we’re supposed to be horrified by in the Russian-trolls narrative, I already see shaping up an attack on donor anonymity for certain kinds of non-profits.  The American left’s theme that such anonymity is all about “dark money” and back-room evil will probably make major use of the Russian-trolls scare in the coming days.

Something similar goes for our use of the Internet and social media platforms.  Facebook has been turning itself inside out to atone for having allowed Russians with fake personas to become users and post material on the site.  Every turn Facebook makes in that regard reduces the freedom users have to engage as they prefer to on the platform.

As a private company, Facebook has the right to react that way.  And the Facebook moves are having a negative impact as we speak on the reach of conservative voices (as are similar moves by Google and Twitter in their separate, distinctive roles).

But we are also edging perilously closer to calls for government regulation and general limitations on our use of social media for the free exchange of political ideas.

We must, therefore, keep in perspective the fact that we are just as responsible for our own thoughts, in the face of propaganda, as we were in the 1980s and the 1940s when the Soviet Russians were using the methods of the day to “attack” us.

We should also be mindful of the example we are setting in our relations with other countries.  That’s not just about setting a good example, for that matter.  It’s about keeping Americans out of jail abroad.  It’s not a long step from the U.S. indicting Russia’s citizens, for “interfering” in our election by making political posts on social media, to Argentina or Egypt indicting American citizens for such interference.

How many Americans use assumed Internet handles to post political comments about other nations’ politics?  Do we really want to set the example of casting that as a criminal conspiracy?

Going after identity theft and fraud is perfectly legitimate – although I doubt we’ll ever see any of the indicted Russians in a U.S. court.  (And if Americans are committing such theft and fraud, have at them.)

The real danger here is the implication that activities Americans routinely engage in, because it is our unalienable right to do so, are existential threats to the nation.  There wasn’t a single political theme posted by the Russian trolls that didn’t mirror something Americans were saying, without anyone having to incite us to say it.

Were our rights existential threats to us when the Soviet Russians of yesteryear injected propaganda into our public square under cover of those rights, and the things we were already using them to say?  The Soviets exploited the living daylights out of our rights to freedom of speech, press, and assembly.  The Russian government does so today under Vladimir Putin.

But we won’t preserve this, the last best hope of man on earth, by curtailing our rights and liberties because agents of a particular Russian government abuse them.

Look around you: the necessary remedy is already at work.  What we need to know about the Russian-troll activity has come out.  Now we are armed with that information.  If we can’t be trusted to use it responsibly, then “democracy” itself – in the sense of free and consensual political relations – is meaningless.  I think most of us understand why that is not the right answer.