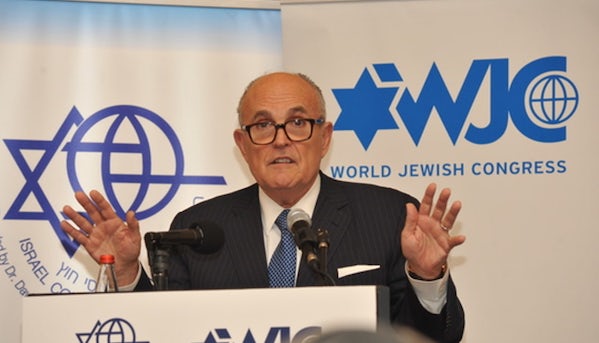 In the latest issue of New York Magazine, former NYC Mayor Rudy Giuliani said he was more of a Jew than George Soros. While it is true that Soros is a Jew by birth and the former may is Catholic, there is truth to what he is saying. After all, Rudy is a good friend of the Jews, and Soros is what is commonly called a self-hating Jew (I call him a Jew-hating Jew because he doesn’t hate himself).

“Don’t tell me I’m anti-Semitic if I oppose him,” he said. “Soros is hardly a Jew. I’m more of a Jew than Soros is. I probably know more about — he doesn’t go to church, he doesn’t go to religion — synagogue. He doesn’t belong to a synagogue, he doesn’t support Israel, he’s an enemy of Israel. He’s elected eight anarchist DA’s in the United States. He’s a horrible human being.”

When CNN reported about Giuliani’s statement, it emphasized that Soros was a holocaust survivor–true. They were trying to infer that because he was a Holocaust survivor doesn’t mean he is pro-Jewish and Jewish caused today. They also reported the ADL’s Jonathan Greenblatt said Giuliani’s attack on Soros was anti-Semitic. However, despite its mission for the past decade, or so, the ADL’s first priority has been progressivism and the Democratic Party. That is why I recommend that donors to the ADL give to  StopAntisemitism.org instead, or if they wish to give to the Democratic Party, send the money directly and cut out the middleman.

I disagree with Rudy on one point, attending Synagogue doesn’t make someone Jewish, it makes one observant. However, he is correct in his claim that Soros supports anti-Semitic BDS supporting causes and other anti-Israel organizations.

Since 2001 the Soros network has given $2,688,561 to Adalah. According to NGO Monitor, Adelah describes itself as an “independent human rights organization.”  Adelah has been instrumental in falsely accusing Israel of war crimes on numerous occasions, including contributing charges to the now-disgraced Goldstone Report and the fake 2002 report of an Israeli massacre in Jenin.  Adalah has also called on governments the world over to sever or downgrade their diplomatic relations with Israel.

Another favorite for Soros money is I’lam, is a Nazareth-based Palestinian media center. I’lam claims its mission is “to empower the Palestinian media landscape and society by promoting equal access to the Israeli media, encouraging a fair information-flow, and fostering professional standards.”  Not stated in their mission but reported by NGO Monitor is the fact that I’lam creates and promotes allegations of media bias in the Israeli media as part of its political agenda. I’lam received about $1.1 million from the Soros organization.

The New Israel Fund (NIF) is also listed as a recipient of Soros’ love, at least  $837,500 since 2009. The NIF donates money to anti-Israel groups dedicated to making false charges and/or promote the anti-Semitic BDS movement against the Jewish State, including Adalah, B’Tselem, Breaking the Silence, and Physicians for Human Rights, Social TV, and 972 Magazine, just to name a few.

Women Against Violence (WAV): received $1,430,000 of Soros. They are another group supporting the anti-Semitic BDS movement.

Along with advocating for the anti-Semitic Boycott, Divestment, and Sanctions (BDS) movement, Mada al-Carmel – Arab Center for Applied Social Research, which received $707K from Soros was one of the creators of the Haifa Document in 2007. The Haifa Document calls for a “change in the definition of the State of Israel from a Jewish state” and accuses Israel of “exploiting” the Holocaust “at the expense of the Palestinian people.”

Soros helped to fund The Woman’s March group, an organization is run by anti-Semites.

Why would Soros, a Hungarian Jew who lived through the Holocaust, spend so much money on the anti-Semitic BDS effort to de-legitimize the Jewish State?  The best explanation comes from my late friend and teacher Barry Rubin:

Rudy Giuliani has always been a supporter of Israel and a fighter against anti-Semitism.  Hence, in that perspective, even though he is a practicing Catholic, Giuliani is more of a Jew than George Soros.

And for those liberals who are tossing their non-kosher cookies, remember that you didn’t complain when Jeffrey Goldberg of The Atlantic called the anti-Semitic Barack Obama, the first Jewish President.