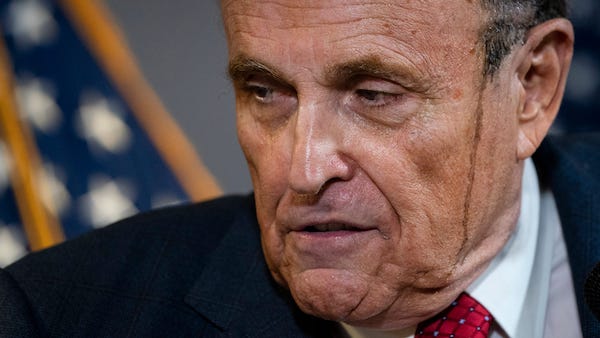 Rudy Giuliani leaped into the hearts of America as the incredibly successful Mayor of New York City who not only cleaned up the Big Apple’s most crime-infested areas and steered the five boroughs back to strength after the horrific attacks of September 11th. After 9/11 Rudy earned the nickname of America’s Mayor. But in recent months he ruined his hero reputation. Rudy Giuliani decline.

Whether or not one believes that voter fraud swayed the election, at times his work on the 2020 election results on behalf of President Trump at times became something of a joke.  A blog post by former Overstock CEO Patrick Byrne, explains the Mayor’s post-election decline. In a truly heartbreaking story Byrne describes Rudy Giuliani as if he was a doddering grandpa, and someone who was regularly ‘s***-faced’ while coordinating the legal effort. Rudy Giuliani decline.

‘Almost every evening, and many early afternoons, Rudy was s***-faced,’ Byrne wrote, quoting others.

Byrne says the evening before the hair dye dripping press conference, he got a phone call from Giuliani asking him to share what he wrote about the voter fraud evidence he collected. He waited 45 minutes at a Georgetown restaurant, gave someone else his documents, and didn’t see Giuliani.

‘Later, people in that room told me what happened when my paper arrived. First, in the 90 minutes between 11:30 PM and 1 AM, Mayor Giuliani imbibed three triple Scotches on ice. Those relating this story could not vouch for what he had drunk before 11:30,’

And the next morning disaster struck:

Nine hours later, Monday morning at 10 AM, Rudy Giuliani took the stage at a joint press conference held with Sidney Powell and Jenna Ellison. Rudy was meant to give a synopsis of where things stood, and then introduce Sidney Powell, who was going to discuss the possibility of mass election fraud on a scale no one was yet comprehending. That it was not about a couple hundred dead people voting here, or a few hundred illegals voting there, but about something deeper, systemic….. Unprecedented.

Instead of sticking to the plan, Rudy Giuliani got carried away, and huffed and puffed his way around the stage for 40 minutes about how many hundreds of dead people had voted here and how illegal people had voted there….. And Joe Frazier still voted! As he worked himself up like Grandpa, repeating all the same points he had been making for days, hair die ran down both sides of his face, unnoticed.

Nine hours earlier, he had had nine shots of whiskey in under 90 minutes.

That wasn’t even the worst of it.  I encourage you to go to Byrne’s site and read the full account of the post-election decline of Rudy Giuliani and disaster that was President Trump’s post-election legal effort.