Roger Goodell’s Priorities Are ALL WRONG! 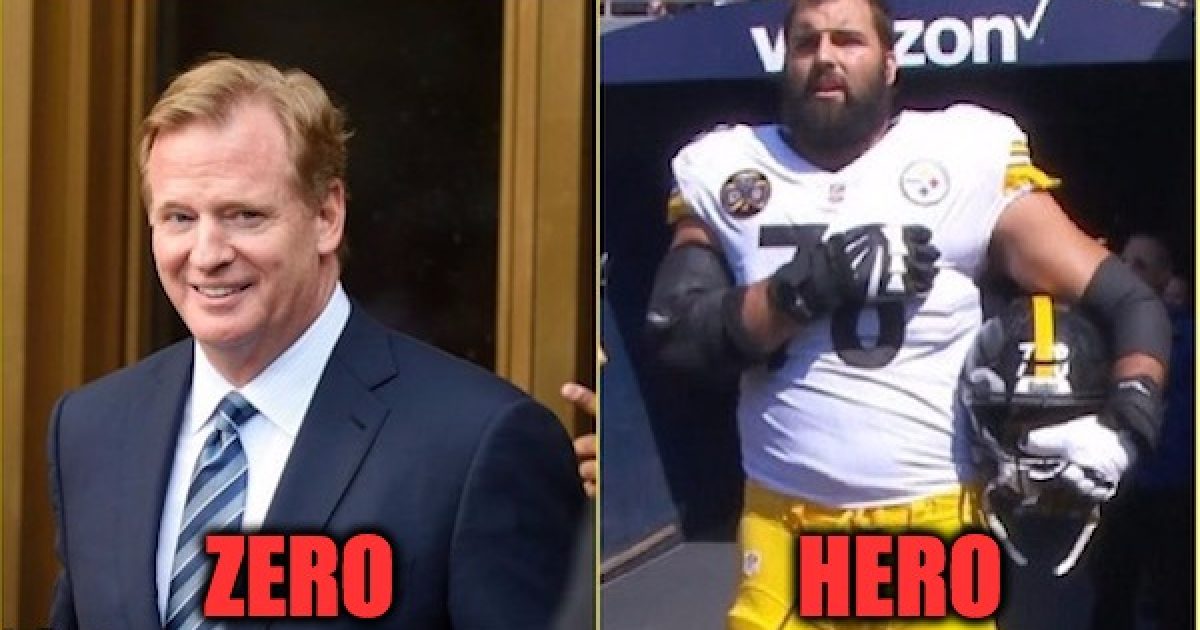 Once again our President is taking sports driven heat through an anxious anti-Trump media when stating his approach to this Kaepernick inspired insanity.  However, as has proven to be the case over and over, our President is totally correct because he has the right priorities. On the other hand, the priorities of NFL Commissioner Roger Goodell are not only narcissistic but all wrong.

Tell me what’s so oppressive in our society which justifies this National disgrace of millionaires disrespecting the country which provided them with the opportunity to get rich?  Are there injustices by authority?  Yes, but when the people in authority are the police, the questionable conduct is very rare and far between, and any solution to this problem exists far away from an NFL sideline.

Having stated this, I grew up in the fifties when society was less open to change.  I for one have watched and experienced the growth of respect for all Americans.  Today is not comparable to yesterday so what is taking place is mostly based upon isolated examples which are being promoted through our more youthful population.  As was the sixties, the adage, “youth is wasted on the young” should also include the fact that the young are most impressionable, idealistic and the most easily motivated.

All this plays into what is currently taking place in sports today.  With a particular emphasis upon the NFL, this “over the top” exhibition of kneeling during the national anthem, disrespecting the nation that enabled them to make millions for playing a game, and the people who put their lives on the line to protect the nation that gave them and their loved ones that opportunity.

It may well be that the NFL is the epicenter for all which hard work and dedication produces.  The odds against a high school player ever making it onto an NFL team is astronomical.  Those that qualify do so from years of endless workouts, practices, film study, injuries, and dedication.

Our rights and freedoms are not boundless.  Everything obeys to certain limitations just as everyone is answerable to higher authority within their chosen fields.  So it is with our unalienable rights.  Free speech has limits, as we all know, when in a theater or at an airport. And as stated in the constitution, the first amendment limits the federal government from infringing on free speech, it does not limit private employers.

This recent trend sadly correlates with the questionable speech right of flag burning.  As with the camel’s nose getting under the tent, one lenient legal interpretation usually permits another.  As the title suggests, there are priorities and they are called so for a reason.

The NFL Commissioner, Roger Goodell has reacted to our President’s position by vehemently stating, “Divisive comments like these demonstrate an unfortunate lack of respect for the NFL, our great game and all our players, and a failure to understand the overwhelming force for good our clubs and players represent in our communities.”

As Eugene O’ Neill wrote in his play “Isle”..”Aye Thar’s the Rub”

Imagine this fellow is earmarking his stance by citing a “lack of respect.”  This is what is meant by priorities!  Mr. Goodell is “unfortunate” within his tunnel vision and lack of priorities.  In the total American landscape, the NFL is a sideline interest, a pleasure enjoyed but not a pre-requisite for life, health, and security.    Respect for this country, its flag, and all who put their lives on the line to protect us is a much stronger priority than respect for the NFL.

Also, do not insult my intelligence with the excusing of this despicable conduct by individually vowing love for those who serve in our military.  The talk will always be cheap!  That Flag is our military’s extension, their cause and reason to endure hardship which millionaire football players dare not even imagine.  Just ask Pat Tillman who left the NFL after 9/11, joined the Army and sadly was killed in battle.

No sir Mr. Goodell, the heroes of America are not football players–even if they hadn’t disgraced themselves needlessly with this anti-American effort.  Contrary to “going to battle” on an NFL field, true battle exists in far-off God-forsaken places which few in the NFL would even visit.

Ratings have already dropped well over 10% in the first two weeks.  And so far week three ratings are down 4% (but Monday Football with a Cowboys-Cardinals matchup may make up the difference. Note: during the pre-season  Cowboy players were warned to stand during the National Anthem-OR ELSE.

FYI, Dallas Cowboys’ Jerry Jones told his players “You will stand for the National Anthem, or your ass will be off this team.”

This taking a knee effort has nothing to do with free speech–it’s more like the childish tantrum parents face when they take their kids to the supermarket but refuse to buy the latest advertised version of a sugared cereal. Especially this week’s effort which was more of a reaction to the legitimate priorities stated by the President, than any social cause.

Mr. Goodell and his band may be served best when remembering, for every action there is a reaction.  For the majority of Americans whether they liked the President’s comments or not, their priorities have not changed they disagree with the players taking a knee. While the reaction so far may be small, eventually it will be acted upon in a major way on Sunday afternoons.  And their staying tuned is not a requirement!

Parts of this post was originally seen at Eagle Rising.