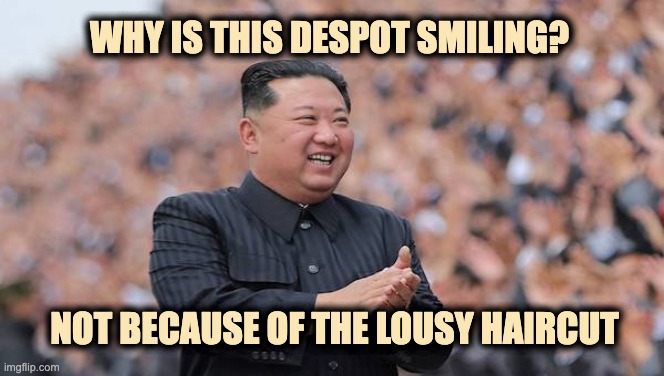 What could possibly go wrong with having the nuclear rogue nation of North Korea oversees the regulatory body that produced the 1968 Nuclear Non-Proliferation Treaty?

North Korea’s UN Ambassador Han Tae Song is slated to chair the United Nations Conference on Disarmament for 4 weeks from May 30 to June 24. The chairmanship rotates through member nations and is basically ceremonial in nature, But  North Korea’s diminutive tyrant with the ugly haircut must be happy.

According to UN rules, Ambassador Song will organize the work of the conference and assist in setting the agenda. He will exercise all functions of a presiding officer, as well as represent the body in its relations with states, the General Assembly, and other organs of the United Nations, and with other international organizations.

Back in January, UN Watch’s Executive Director, Hillel Neuer had some pretty harsh words about North Korea acting as Chair.

“Having the North Korean regime of Kim Jong-un preside over global nuclear weapons disarmament will be like putting a serial rapist in charge of a women’s shelter,” said Hillel Neuer, executive director of UN Watch, a Geneva-based non-governmental organization that monitors the United Nations.

“This is a country that threatens to attack other UN member states with missiles, and that commits atrocities against its own people. Torture and starvation are routine in North Korean political prison camps where an estimated 100,000 people are held in what is one of the world’s most dire human-rights situations,” said Neuer…

…“If the U.N. seeks to be an institution with a moral compass, it cannot allow the likes of North Korea to direct arms control agencies, and to keep electing the world’s worst abusers on its top human rights body,” said Neuer.

The NGO based in Geneva also said that they will be organizing protest events with victims of North Korea’s abuses.

“North Korea holding the president’s gavel is liable to seriously undermine the image and credibility of the United Nations [even more], and will send absolutely the worst message,” added Neuer.

Similarly, the New York Post said in January that the announcement was “fresh proof of the lunacy of the United Nations” and advised governments that actually care about disarmament to boycott the conference “as the United States and Canada did when Iran held the same chair in 2013.”

The Korean Broadcasting Service is reporting that 30 other NGOs have joined UN Watch “urging UN Secretary-General Antonio Guterres and all democracies” to protest the NoKo leadership of the conference.

UN Watch, a Geneva-based non-governmental organization which monitors the performance of the UN, made the call in a statement on Thursday, which was also signed by some 30 other NGOs.

The organization said the North Korean regime builds its own nuclear weapons and sells missile and atomic know-how to other rogue regimes in blatant violation of UN sanctions.

But it would appear that the United Nations, an organization that has become a platform to legitimize despots and dictators, has no shame whatsoever and didn’t see fit to preemptively end this farce.

The rotating chair position is just for show, but still…

This is a country that is in constant violation of nine separate UN orders because of its continued nuclear and ballistic-missile programs, threatens other member states with annihilation, and has found a niche in selling weapons to unstable countries.

So, it seems like a bad idea to give them the legitimacy even for a ceremonial role.

Just Wednesday, Seoul reported that the North Korean regime has been testing ICBM missiles again. Pyongyang has repeatedly rejected all of the Biden-Harris admin’s attempts at communication and mocked President Biden as “feeble” and “senile.(as do many Americans).

South Korean military officials told reporters on Wednesday that one of three missiles launched by the communist regime in North Korea that day was likely the Hwasong-17, the most advanced of Pyongyang’s intercontinental ballistic missiles (ICBMs).

A top official in the newly minted administration of conservative South Korean President Yoon Suk-yeol also told reporters on Wednesday that South Korea has reason to believe that dictator Kim Jong-un is revamping the Punggye-ri Nuclear Test Site and appears to be testing a nuclear detonator.

North Korea has tested six nuclear bombs in its history, four under President Joe Biden’s former boss, Barack Obama. Biden visited South Korea and Japan last week for, among other things, his first in-person meeting with Yoon since the latter took office on May 10. North Korea has rejected all of the Biden administration’s attempts to communicate and has repeatedly mocked Biden as “feeble” and “senile”).

“A country that flagrantly violates UN Security Council resolutions explicitly prohibiting its ballistic missile launches should be barred from any formal positions in UN bodies dealing with the such vital matters as nuclear weapons disarmament,” said Neuer.

“The North Korean regime of Kim Jong-un simply cannot be a credible chair of this or any other United Nations body. North Korea’s illegal development of nuclear weapons, in breach of its disarmament obligations, run counter to the objectives and principles of the Conference on Disarmament itself,” said Neuer. “North Korea’s chairmanship will only undermine the integrity of both the disarmament framework and of the United Nations, and no country should support that.”

The session will open under the presidency of China. The presidency of the Conference rotates among its Member States according to the English alphabetical order, with each President holding office for four working weeks. After China’s presidency (24 January to 18 February), the following countries will also take the presidency during 2022: Colombia (21 February to 18 March), Cuba (21 March to 1 April and 16 to 27 May), Democratic People’s Republic of Korea (30 May to 24 June), Democratic Republic of the Congo (27 June to 1 July and 1 to 19 August), and Ecuador (22 August to 16 September). The three parts of the 2022 session of the Conference will be held from 24 January to 1 April for the first part, from 16 May to 1 July for the second part, and from 1 August to 16 September for the third part.

That the United Nations is continuing to allow this makes it pretty clear that the organization is a sham.

Trump really should’ve turned the headquarters into condos when he had the chance.