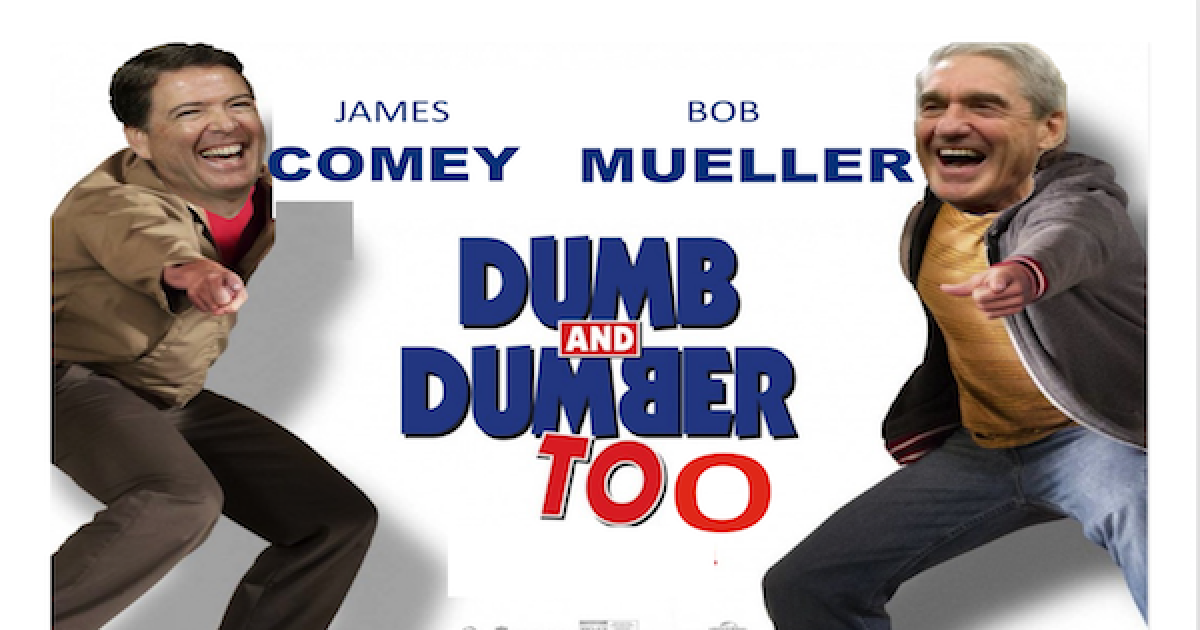 Jim Carrey and Jeff Daniels better look out because Robert Mueller’s so-called “investigation” into alleged Trump collusion with Russia is starting to look like the third installment of their absurdist movie series Dumb and Dumber.

With each indictment or “scalp” taken by team Mueller, we see this investigation drifting farther and farther from the claimed goal of looking to ferret out any “collusion” Donald Trump and his campaign is supposed to have committed with the Russians to affect our 2016 presidential election. In fact, to date, not a single aspect of Mueller’s efforts seem to lead anywhere near proving any such collusion.

Indeed, as far as former assistant United States Attorney Andrew C. McCarthy can tell, the actual goal was never to discover any legal evidence of “collusion,” but has been instead an effort to lead to a political goal of impeachment.

Contrary to what many liberals and media blatherers try to tell Americans, impeaching a president is not an act of the law, it is politics from start to finish. Even the main charge for impeachment “high crimes and misdemeanors” is purposely vague so as to allow the process its political air instead of giving it any procedures based solidly on the law.

As far as McCarthy can tell, the whole Mueller deal has been meant as a political ploy all along. The National Review columnist and legal expert specifically point out that the low-end charges that Mueller’s targets have pled guilty to so far prove that Mueller does not have a case for “collusion.” Not only that, McCarthy says the whole joke-of-a-case seems to show Mueller isn’t even interested in making any case for the charges his investigation was convened to prove.

In his December 4 article, McCarthy points out to readers that the minor charges that Manafort, Flynn, and Papadopoulos have pled guilty to have nothing whatsoever to do with collusion. And in the case of Manafort, it doesn’t even have anything to do with Trump!

McCarthy notes that many in the media imagine that Mueller is hitting them with small charges to get them to flip on Trump of someone high up on his presidential campaign team. But, that isn’t how any of this works McCarthy says. Prosecutors don’t go for the minor charges. They go for the toughest, most serious charges right out of the box and try to use that to force cooperation. It doesn’t work the other way around.

Bottom line: If the FBI had a collusion case of some kind, after well over a year of intensive investigation, Flynn and Papadopoulos would have been pressured to plead guilty to very serious charges — and those serious offenses would be reflected in the charges lodged against Manafort. Obviously, the pleas and the indictment have nothing to do with collusion because Mueller has no collusion case.

1.) There is a great deal of misinformation in the commentariat about how prosecutors build cases.

2.) For all practical purposes, the collusion probe is over. While the “counterintelligence” cover will continue to be exploited so that no jurisdictional limits are placed on Special Counsel Robert Mueller, this is now an obstruction investigation.

3.) That means it is, as it has always been, an impeachment investigation.

So, it’s all politics and has nothing at all to do with the law. Another incident inside Mueller’s team also proves this to be true. We found out months ago that one of Mueller’s FBI investigators was fired off the case, but it wasn’t until last week that we found out why he was eliminated.

It turns out this FBI official was fired because he was so clearly in the tank for Hillary Clinton that his judgment was suspect.

Peter Strzok, the FBI agent in charge of the so-called investigation into Russia collusion, was let go from the team four months ago, but now we find out that he was dismissed because it had been found out Strzok was engaging in numerous anti-Trump communications with his mistress, the Daily Caller reported.

“Peter Strzok’s text messages — which he exchanged with Lisa Page, an FBI lawyer who worked briefly on the Russia investigation — are perhaps the most significant evidence of anti-Trump bias uncovered so far on the Mueller team,” Daily Caller wrote.

So, one of the people put in charge of investigating Trump was a virulent Trump hater. No wonder his judgment was suspect.

Worse, now at least one former FBI official is warning that Mueller himself has a “huge conflict of interest” in this whole investigation. As Breitbart News reported on Monday:

Not only do observers describe Mueller and the man he recommended to replace him as FBI director, James Comey, as close or even best friends, but the special counsel pursues an investigation heavily involving the bureau he once led. How one maintains detachment in leading a team that includes numerous anti-Trump partisans in a probe involving one’s close friend and the former bureau for which Mueller served as director goes unexplained.

“Bob Mueller should have never been offered nor accepted the job as special counsel as he has a huge conflict of interest,” former FBI assistant director Jim Kallstrom said. “He should have recused himself.”

In the end, it is clear that this Mueller investigation is a farce on the level of Jim Carrey’s Dumb and Dumber movies and could yet qualify as the biggest joke in Washington D.C