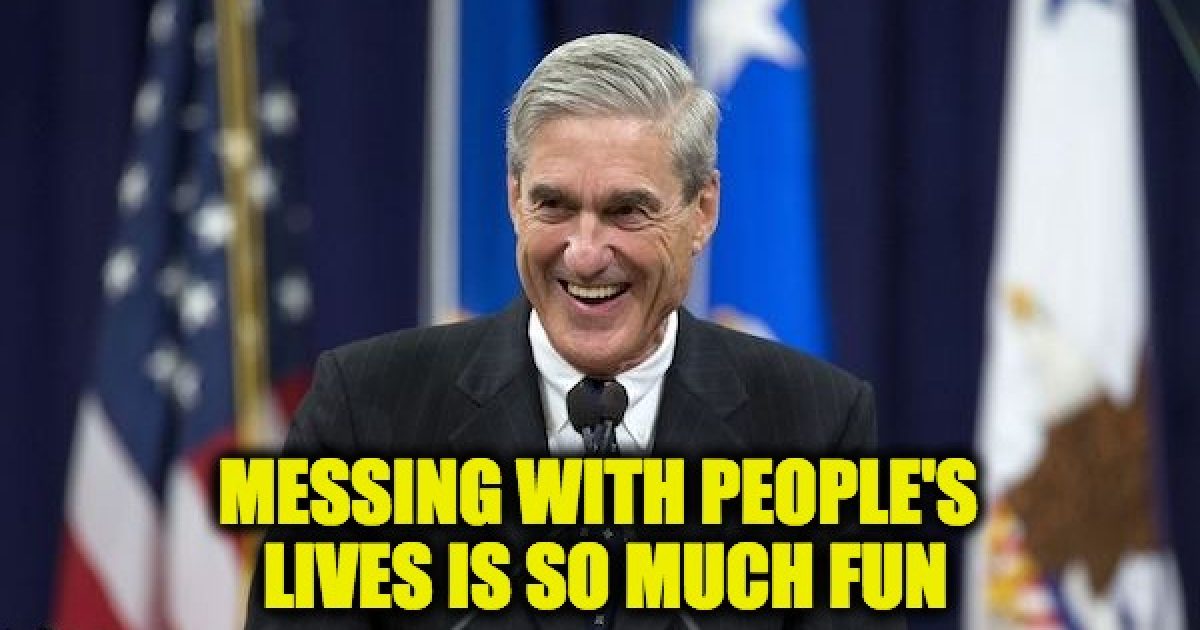 Robert Mueller may have a conflict of interest in the Russia election meddling investigation. The Hill is reporting that in 2009 when he was running the FBI, the bureau wanted, “Russian oligarch Oleg Deripaska to spend millions of his own dollars funding an FBI-supervised operation to rescue a retired FBI agent, Robert Levinson, captured in Iran while working for the CIA in 2007.” That’s the same Deripaska who slapped with sanctions by the U.S. last month. Deripaska’s possible ties to Paul Manafort were part of the Mueller investigation despite the fact that they occurred over a decade before he worked on the Trump campaign.

The Levinson mission is confirmed by more than a dozen participants inside and outside the FBI, including Deripaska, his lawyer, the Levinson family and a retired agent who supervised the case. Mueller was kept apprised of the operation, officials told me.

Some aspects of Deripaska’s help were chronicled in a 2016 book by reporter Barry Meier, but sources provide extensive new information about his role.

They said FBI agents courted Deripaska in 2009 in a series of secret hotel meetings in Paris; Vienna; Budapest, Hungary, and Washington. Agents persuaded the aluminum industry magnate to underwrite the mission. The Russian billionaire insisted the operation neither involve nor harm his homeland.

“We knew he was paying for his team helping us, and that probably ran into the millions,” a U.S. official involved in the operation confirmed.

One agent who helped court Deripaska was Andrew McCabe whose lying about element’s of the Russia probe led to his dismissal.

Deripaska eventually spent $25 million mobilizing a rescue team who executed their mission with the help of Iranian contacts and under the supervision of the FBI. The team found pictures and videos proving that Levinson was still alive.

Then in fall 2010, the operation secured an offer to free Levinson. The deal was scuttled, however, when the State Department become uncomfortable with Iran’s terms, according to Deripaska’s lawyer and the Levinson family.

“We tried to turn over every stone we could to rescue Bob, but every time we started to get close, the State Department seemed to always get in the way,” said Robyn Gritz, the retired agent who supervised the Levinson case in 2009, when Deripaska first cooperated, but who left for another position in 2010 before the Iranian offer arrived. “I kept Director Mueller and Deputy Director [John] Pistole informed of the various efforts and operations, and they offered to intervene with State, if necessary.”

Gee state kept screwing it up? Perhaps the Clinton Foundation wasn’t getting enough cash from the deal.

The FBI killed the operation in 2011 because they were afraid that with all the bickering between departments Deripaska’s mission would fail. But thanks to Hillary backing out of making a statement already drafted and agreed to, at the last-minute, and the Obama/Kerry negligence during the JCPOA negotiations Robert Levinson is still being held by Iran.

Why does any of this matter? On one hand, the FBI Director Mueller was consulted and updated at every step of the Deripaska operation which was being overseen by senior FBI agents.

Even though he was banned from entering the country because of his organized crime ties, “The FBI rewarded Deripaska for his help. In fall 2009, according to U.S. entry records, Deripaska visited Washington on a rare law enforcement parole visa. And since 2011, he has been granted entry at least eight times on a diplomatic passport, even though he doesn’t work for the Russian Foreign Ministry.”

Back to Manafort, he was the first person charged by Mueller’s in the Russia probe, for money laundering and Illegal lobbying that occurred eleven years before the election and couldn’t have had anything to do with Russian interference or collusion with the Trump campaign.

Deripaska once hired Manafort as a political adviser and invested money with him in a business venture that went bad. Deripaska sued Manafort, alleging he stole money.

Mueller’s indictment of Manafort makes no mention of Deripaska, even though prosecutors have evidence that Manafort contemplated inviting his old Russian client for a 2016 Trump campaign briefing. Deripaska said he never got the invite and investigators have found no evidence it occurred. There’s no public evidence Deripaska had anything to do with election meddling.

(…) Two months before Trump was elected president, Deripaska was in New York as part of Russia’s United Nations delegation when three FBI agents awakened him in his home; at least one agent had worked with Deripaska on the aborted effort to rescue Levinson. During an hour-long visit, the agents posited a theory that Trump’s campaign was secretly colluding with Russia to hijack the U.S. election.

“Deripaska laughed but realized, despite the joviality, that they were serious,” the lawyer said. “So he told them in his informed opinion the idea they were proposing was false. ‘You are trying to create something out of nothing,’ he told them.” The agents left though the FBI sought more information in 2017 from the Russian, sources tell me. Waldman declined to say if Deripaska has been in contact with the FBI since Sept, 2016.

So why care about some banished Russian oligarch’s account now?

Just like they lied the FISA judge about the dossier, did the FBI tell the judge they asked one of their past Russian sources about possible Russian-Trump collusion, and that source laughed at the ridiculous notion?

Second, the U.S. government in April imposed sanctions on Deripaska, one of several prominent Russians targeted to punish Vladimir Putin — using the same sort of allegations that State used from 2006 to 2009. Yet, between those two episodes, Deripaska seemed good enough for the FBI to ask him to fund that multimillion-dollar rescue mission. And to seek his help on a sensitive political investigation. And to allow him into the country eight times.

John Solomon, the Hill reporter, says he was tipped to Deripaska’s past FBI relationship by U.S. officials who “wondered whether the Russian’s conspicuous absence from Mueller’s indictments might be related to his FBI work.”

Solomon also talked to Alan Dershowitz who said ” he believes Mueller has a conflict of interest because his FBI previously accepted financial help from a Russian that is, at the very least, a witness in the current probe. The real question becomes whether it was proper to leave [Deripaska] out of the Manafort indictment, and whether that omission was to avoid the kind of transparency that is really required by the law,” Dershowitz said.

Melanie Sloan, who ran the ethics watchdog CREW is worried that the FBI/Deripaska operation was illegal. “It’s possible the bureau’s arrangement with Mr. Deripaska violated the Antideficiency Act, which prohibits the government from accepting voluntary services.”

George Washington University constitutional law professor Jonathan Turley agreed: “If the operation with Deripaska contravened federal law, this figure could be viewed as a potential embarrassment for Mueller. The question is whether he could implicate Mueller in an impropriety.”

But of course, nothing will matter unless the Justice Dept. (Rod Rosenstein), Congress or one of the defendants raised the question of Mueller’s conflicts.  Until then like the man other questions about the Mueller investigation, are simply questions without answers.