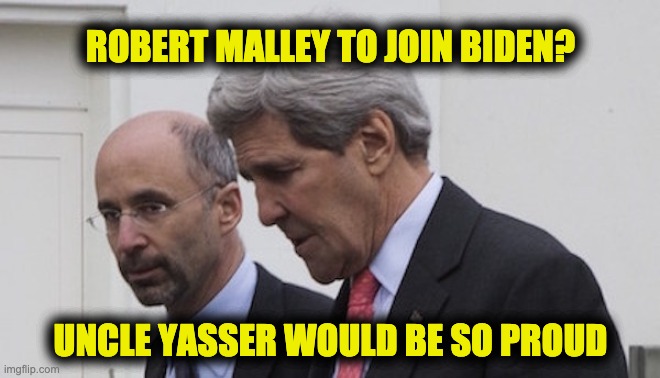 Per Jewish Insider, President Biden is considering adding another Israel hater to his team. Robert Malley, who shared his anti-Israel views as part of the Clinton and Obama administrations, an adviser to Bernie Sanders, and grew up with a socialist dad who was a close friend of terrorist Yasser Arafat. According to the report, Malley will be joining the re-Obama administration as Biden’s special envoy to Iran. Robert Malley Iran

The potential appointment of Malley comes as members of the Biden transition team have begun to lay out the president-elect’s vision for diplomacy with Iran following the Trump administration’s 2018 withdrawal from the 2015 nuclear agreement.

The Biden transition team declined to comment and noted that they do not presently have any personnel announcements.

A source familiar with the Biden team’s approach on Iran told JI, “The president-elect has said that if Iran resumes strict compliance with the JCPOA, the United States would return to the agreement as a starting point for follow-on negotiations. But Iran is a long way from returning to compliance, and there are many steps in the process to getting there that we will need to evaluate once in office. Our first order of business will be consulting with Congress and our allies on the path forward.”

“Rob and I are close friends,” longtime State Department official Aaron David Miller, who is currently a senior fellow at the Carnegie Endowment for International Peace, told Jewish Insider. “If the reports of the appointment are accurate, it would be a smart move. Nobody knows the issue, the agreement and the region better than Rob Malley. He understands the JCPOA’s strengths and limitations, and more important is very close to both Blinken and Sullivan. It will be a tough go, dealing with Iran and the Israelis. But Malley’s smart and tough enough to handle both.”

When reading his quote, remember that Miller was part of former Secretary of State James Baker’s Jewish anti-Israel team hired give cover to the S.O.S. who was famous for saying, “F*ck the Jews they won’t vote for us anyway.”

For those who are unfamiliar with Mr. Malley, he is a second-generation Israel hater. I do not believe the father’s sins are visited on the son, but this son has chosen to follow in his dad’s footsteps.

Malley grew up in France, where his Egyptian-born father, Simon Malley, and New York raised mother, Barbara (Silverstein) Malley, were radical publishers of a controversial magazine about Africa and the so-called Third World. Malley’s parents were rabidly anti-Israel and counted Yasir Arafat as a personal friend. Indeed, Arafat was among those “leaders” (for want of a better word) who had intervened with the French government to readmit the Malley family to France after being expelled for their radical activities.

Malley’s personal pedigree not only includes a host of anti-Israel articles, many of which were co-authored with Hussein Agha- a former adviser to the terrorist Arafat. As a former aide to Bill Clinton, Malley is the only American privy to the Clinton peace efforts to blame Israel for their lack of success. The others involved, including the former President, said that Yassir Arafat walked away from a “sweetheart” deal. He was also believed to be the chief source for an article by Deborah Sontag that whitewashed Arafat’s role in the collapse of the peace process, an article that has been widely criticized as riddled with errors and bias.

Sometimes facts are just inconvenient things. What Malley refused to mention in his Hamas propaganda is that Hamas threw out the “democratic institutions” of the Palestinian Authority in Gaza with a military operation  And once Hamas took over Gaza until the time Malley wrote he above op-ed, it was responsible for launching almost 20,000 missiles, mortars, etc., into civilian areas of Israel.

As a member of Obama’s 2008  campaign team, it was revealed that Malley was secretly meeting with Hamas, and he was supposedly fired because of those meetings. But the truth was Malley was a willing sacrificial lamb to make Obama look good. He remained one of the most trusted Middle East advisors for Obama, the most anti-Israel president since the Jewish State’s reestablishment in 1948.

In 2014 Malley became official again. He became Obama’s czar in charge of countering the Islamic State of Iraq. He was eventually promoted to being a special assistant to the President and moved on to the NSC as Middle East Coordinator. There he was actively engaged in negotiating the JCPOA—the Obama/Kerry capitulation to Iran.

In between and after his Obama tenures, Malley served progressive anti-Israel puppet-master George Soros at the International Crisis Group. Even today, he’s working at the ICG, an international think tank funded by the “dude of spooky” himself. He has also served on the advisory council of the anti-Israel Organization, J-Street.

If Malley is appointed by Biden to be his contact with Iran, he will complement the rest of the new President’s foreign policy team, which features a return of many other Obama’s anti-Israel advisers. Malley fits right in. He’s made a career of opposing the Jewish State of Israel, and defending his father’s good friend, the terrorist Arafat, and supporting the terrorist group Hamas. Malley helped negotiate the Obama nuclear capitulation to Iran despite its support of terrorism, violation of human rights, desire for nuclear weapons to attack the big Satan (US) and little Satan (Israel).

A Malley appointment is another indication that the re-Bama administration of President Biden will put America and our ally Israel in grave danger. We will be returning to the lead from behind, appease terrorists, apologize for the American foreign policy of Obama and many of his predecessors, leading to a nuclear Iran, a lack of respect for the United States, and an increase in terrorist attacks.