Is Rex About To Become An Ex? 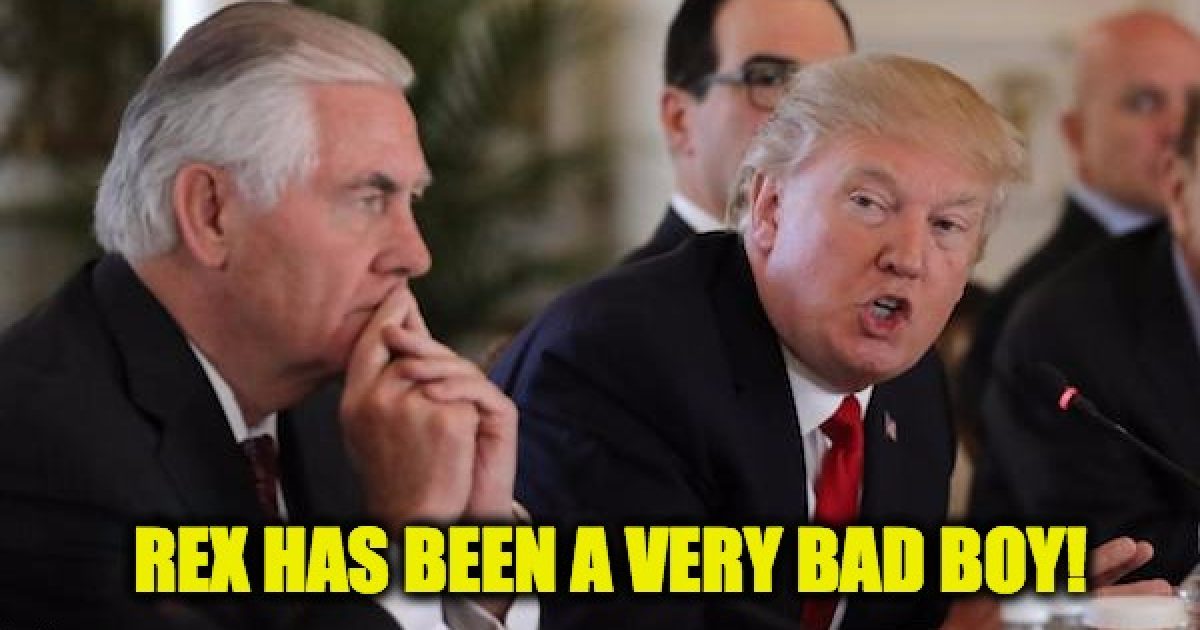 The latest team Trump personnel change rumor seeping out from the beltway is that Secretary of State Rex Tillerson’s tenure at Foggy Bottom may be on shaky ground. And based on his interview with Chris Wallace on Sunday, Tillerson may be pushing for it to happen sooner rather than later.

Apparently, the President is dissatisfied with the former Exxon Chief’s “in the box” thinking or as Axios reported:

One time recently, after Trump had returned from a meeting on Afghanistan, a source recalled Trump saying, “Rex just doesn’t get it, he’s totally establishment in his thinking.”

Trump’s frustration with Tillerson includes the fact that he doesn’t have people in the top jobs at Foggy Bottom.

They know he’s reorganizing the agency, but can’t fathom why he’s allowed these crucial jobs to remain in the hands of staff whose diplomatic stature is diminished because they’re “acting” in the roles.Tillerson’s spokesman R.C. Hammond told Axios it’s because “the system is busted. The Secretary sends over recommendations and they sit on the dock.”

But Trump’s disappointment with the Secretary of State goes beyond personnel and into policy. For example, the President supported the Saudi-Led blockade of Qatar, because the country was funding terrorism. “Tillerson muddied Trump’s message, urging Qatar’s neighbors to ease up on the blockade and engage in ‘calm and thoughtful dialogue’ Tillerson’s spokesman R.C. Hammond says, “On Qatar, progress will be measured in months and we are seeing it”

Sources from within the beltway are that Tillerson has clashed with the president on some major policy differences. The Secretary of State was one of the major proponents for delaying the move of the U.S. Embassy in Israel to Jerusalem and against declaring Iran in violation of the nuclear deal. R.C. Hammond defends his boss saying “This admin inherited a lousy deal. It’s taking the circumstances created by the Deal and trying to build around it a policy that addresses all of the threats Iran offers the world.” President Trump as given in to his Secretary of State twice, it will be interesting to see if the third time is the charm.

Tillerson argued against the White House’s financial sanctions against the dictatorial regime in Venezuela, according to sources close to the White House. These sources pointed to the influence on Tillerson of Tom Shannon, a top State careerist who is an expert on Latin America.Sources close to the president view Shannon as a rogue force who, in their view, naively puts too much faith in diplomacy at the expense of hardline actions like sanctions.

Perhaps the Secretary of State is looking to lose his job. Tillerson was interviewed by Chris Wallace on the latest edition of Fox News Sunday and he seemed to toss his boss under the bus when asked about the President’s reaction to Charlottesville.

Wallace: Finally, and I got a little over a minute left, the controversy over the racial protest in Charlottesville and the president’s response to it has become an international issue. A U.N. committee this week criticized the Trump administration for, quote, its failure at the highest political level to unequivocally reject and condemn the racist violent events and demonstrations.

And here was the president in Phoenix this week talking more about the media than he was about the neo-Nazis and the Klan. Here he is.

President Trump: The only people giving a platform to these hate groups is the media itself and the fake news.

Wallace: Does that make it harder for you to push American values around the world when some foreign leaders question president’s values?

Wallace: And when the president gets into the kind of controversy he does and the U.N. committee response the way it does, it seems to say they begin to doubt are — whether we’re living those values.

Wallace: And the president’s values?

Tillerson: The president speaks for himself, Chris.

Wallace: Are you separating yourself from that, sir?

Tillerson: I’ve spoken – I’ve made my own comments as to our values as well in a speech I gave to the State Department this past week.

YIKES! That does not sound like a guy who wants to keep his job. The rumor is that if Tillerson leaves (or is pushed overboard) U.N. Ambassador Niki Haley will be taking his job. But even if he is on “thin ice” don’t look for that to happen in the short term.

On Monday (today) Tillerson is having lunch with the POTUS and the Vice-POTUS, how I would love to have a bug under the table of that conversation (along with the giant bag of popcorn).