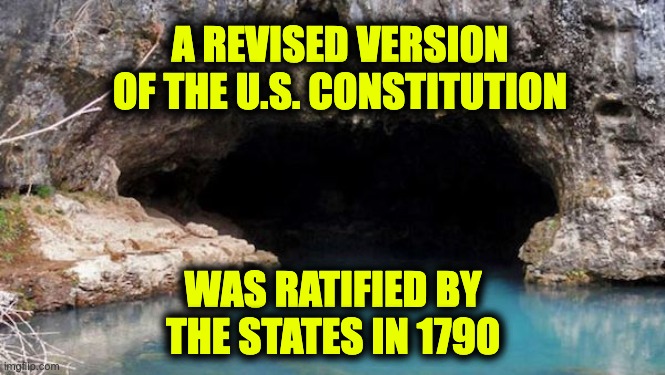 In an unexpected Washington D.C. news conference, archeologists working for the Democratic Party have announced an incredible discovery, a revised copy of the U.S Constitution. The revised version was dated March 1790, only two years after the Constitution we supposedly use today was ratified. This document was original 13 States to supplant the version that was ratified in 1788. The Chief Archeologist on the project named the document “the Dead Potomac River Scrolls” because they were found in a previously unknown cave on the bank of the Potomac.

According to the scientists, a 51-year-old artist/consultant for the CCCP named Hunter Biden was walking his dog near the river. He threw away a computer and heard some glass shatter. He followed the shatter noise into the cave and found the document amongst some broken beer bottles left over from some ancient Senate vote-a-rama.

Scientists determined the cave was once occupied by some ancient cult of leftists. On the cave wall was a drawing of someone who looked exactly like Joe Biden with a caption written in an undecipherable ancient language “Etsly Ogay Andonbay” ” Next to that drawing is another of what seems to be a  stick figure with orange hair. Under that picture is written the words “Amblay Uptray”

The cult known in history books as the Progressenes, wrote the document in English, and it begins with an amazingly prophetic preamble,

We the People of the United States, in Order to form a Union even more perfecter than we did two years ago, do ordain and establish this brand spanking new Constitution for the United States of America recognizing that the document approved in 1788 took rights away from the federal government to give to the people.

Overall the document is very similar to the Constitution passed in 1788. It just adds a few things:

It is quite impressive the way these Progressenes were able to see into the future, beyond the prophetic articles and preamble, included in this revised Constitution was a document called “The Bill of Other Rights Which Corrects the Original Constitutions Wrongs,” these included:

For proof of its validity, just look at the fact that this document has already been endorsed by the Democratic Party and Biden administration. This is the president who said he would unite the American people, was arrested with Nelson Mandela on the streets of Soweto,  went to law school on a full academic scholarship, and had a conversation about his mileage riding  Amtrack with the train’s conductor– who retired fifteen years earlier. Why should we stop believing in Biden and his administration now? Especially on this issue which is a big f**king deal.

Perhaps the best reason to believe that this document is legitimate is the fact that the provisions of this revised Constitution were put into practice by the Biden White House team. Face it. If these provisions were followed without supporting evidence, the press, which is counted upon to be a watchdog over the government, would scream bloody murder. And the press has been totally silent about the government following any of the Dead Potomac River Scrolls provisions. You see, it has to be legit.

Additionally, Attorney General Garland says anyone who doesn’t follow the newly found revised Constitution will be arrested and forced to share a cell with parents who spoke out at school board meetings.

According to the archeologists, there are more documents in the cave, specifically court precedents supporting the revised Constitution, proof that Dr. Fauci had nothing to do with Wuhan Lab’s gain of function research, and Senator Blumenthal’s (D-CT) combat service record. They will be released as soon as they are written, I mean, examined.