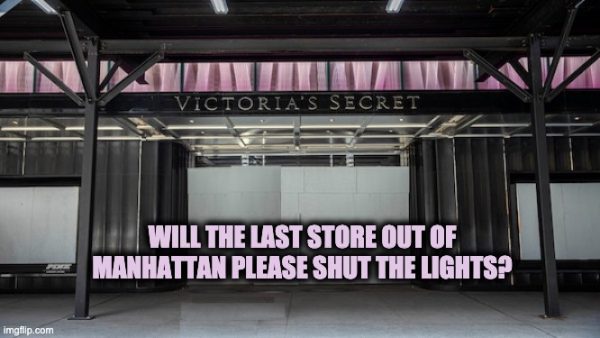 Lockdowns as a result of the pandemic, no tourism, and the threat of riots and looting have made retail business in Manhattan almost impossible. retail chains abandon Manhattan

Retail stores were already in trouble with the rise of Amazon and other discount online shopping sites…and then the pandemic hit.

Lockdown orders were issued. New York City was devastated as the virus spread and became the reported “epicenter” of the coronavirus. More than 32,000 New Yorkers have died during the pandemic. Tourism was discouraged and essentially ended as lockdowns continued. Mandatory 14-day quarantines were put in place. Mayor Bill de Blasio(D) has ordered “checkpoints” and will be enforcing quarantines to travelers to NYC.

To add to the devastation of a global pandemic, the George Floyd protests began and quickly turned into riots. High-end retail stores in SoHo and mid-town were looted.

Crime in NYC went on a rapid rise, starting when De Blasio, put 1,500 criminals back on the street because of ChinaVirus, enacted a bail reform law which allows arrested criminals right back on the streets and disbanded the  NYPD anti-crime unit whose primary responsibility was taking illegal guns off the street. And for next year the police budget was cut by $1 billion.

Residents are leaving. Office buildings are mostly empty, and so are the streets.

The Democrat-run city (and state) have made NYC a costly place to do business. Even the large, national chains aren’t immune. Some big-name retail chains are closing their flagship stores in Manhattan for good, and others haven’t bothered to reopen after locking-down.

The New York Times reports that some national retail chains in Manhattan are shutting their doors for good because they are “struggling more than their branches elsewhere.”

In the heart of Manhattan, national chains including J.C. Penney, Kate Spade, Subway and Le Pain Quotidien have shuttered branches for good. Many other large brands, like Victoria’s Secret and the Gap, have kept their high-profile locations closed in Manhattan, while reopening in other states…

…“Anyone in the food and dining business is really suffering right now,” said Vin McCann, a restaurant consultant with Heyer Performance in Lower Manhattan. “I think that’s true in all the boroughs.”

New York’s stringent lockdown and methodical reopening may have brought the virus to heel, Mr. McCann said. Still, it is also wreaking havoc on businesses with so few people going to work, virtually no visitors, and many residents “a little loath to go out” and worried about their health.

Although the New York Times is mostly laying the blame on the lockdowns, it’s pretty clear that the threat of riots and looting is also a factor. Businesses can’t just keep losing merchandise and replacing smashed windows and fixtures on a regular basis.

Don't know who recorded it but I downloaded this yesterday

"Beirut DeBlasio" without the explosion pic.twitter.com/5I48ZGcWTZ

It’s not just the stores that are struggling, restaurants have taken quite a hit, too.

Of Ark Restaurants’ five Manhattan restaurants, only two have reopened, while its properties in Florida — where the virus is far worse — have expanded outdoor seating with tents and tables into their parking lots, serving almost as many guests as they had indoors.

“There’s no reason to do business in New York,” Mr. Weinstein said. “I can do the same volume in Florida in the same square feet as I would have in New York, with my expenses being much less. The idea was that branding and locations were important, but the expense of being in this city has overtaken the marketing group that says you have to be there.”

When they keep these businesses shut down like this, will there be any reason to visit Manhattan? Will anything be left?

It looks like Governor Cuomo isn’t just going to be begging wealthy New Yorkers to come back, he’s going to have to wine and dine some business owners, too. He’ll just have to make the meals at his home.