'We Have Already Seen Ships Re-Route To Florida And Look Forward To Accommodating Even More.' 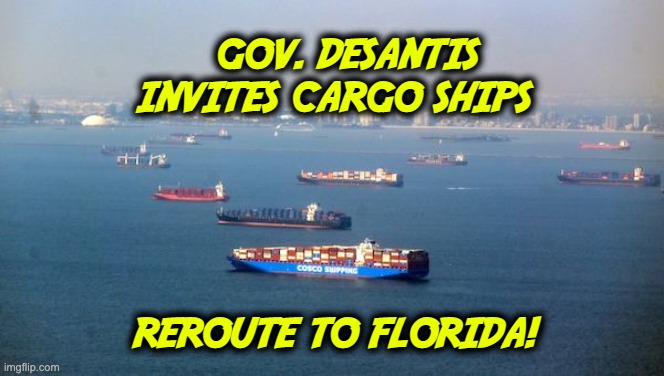 While the White House desperately spins their supply chain crisis as proof of what a great job they are doing, Gov DeSantis has a very different message in response to it—send your ships to our ports. reroute to Florida

As of Tuesday, more than 100 cargo ships were waiting to unload thousands of containers outside of the ports of LA and San Diego in southern Cali]fornia. Team Biden bragged that this is part of the really great and successful Biden economy.

Let’s all remember that point when he tries to blame Trump when this same economy he’s bragging about takes exactly the path every conservative attempted to warn him it would take if he ramped up spending, red tape, and taxes while killing our energy independence and imposing arbitrary restrictions on the economy.

Why did they have to run this spin?

Because empty shelves were starting to go viral. Stores are beginning to limit the number of products their customers can purchase. And the supply chains on which those stores rely to restock them are now severely disrupted.

Images like this one with a backlog of ships waiting to unload their cargo make life harder for the spinmeisters. Especially when people familiar with the situation share some ‘inconvenient truths’ about where the problem came from.

The port is jammed full of containers with no place to stack more. The liberal media is blaming it on the trucking industry while the nation's store shelves are becoming bare… Well there's more to the story. Could Gavin Newsom & California's liberal trucking laws be the blame?

Government red tape is a problem? What. A. Surprise!

Gov. Ron DeSantis is happy to remind Newsom that not every state is so severely mismanaged as California. Florida will be more than happy to take any overflow that California cannot handle. In fact, he’s invested big money in new ports with plenty of capacity.

Florida stands ready to alleviate the shipping bottleneck in other states. pic.twitter.com/XCvuuppB9A

It’s not empty boasting either. Some have already made the switch. 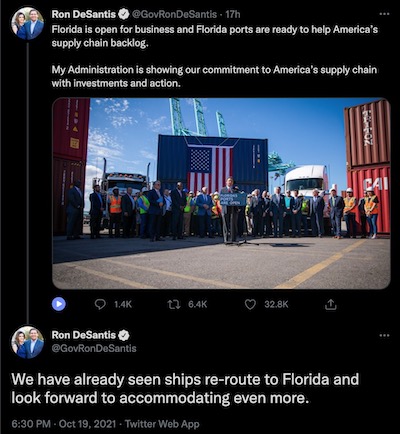 Meanwhile, Biden’s guy Pete Buttigieg is on the job solving the crisis.  And he does have the credentials—well— people with dementia believe he has the credentials.  His last job was mayor of South Bend, Indiana, a one-horse town where the horse died decades ago.  The city has a population of only 102,000.  That population puts South Bend below the top 200 cities in the US.  As mayor, Buttigieg managed one bus terminal and a fleet of 60 buses. The technical term for South Bend’s transportation assets managed by mayor Pete is “bupkis.”

Pete Buttigieg is way over his head as transportation secretary.