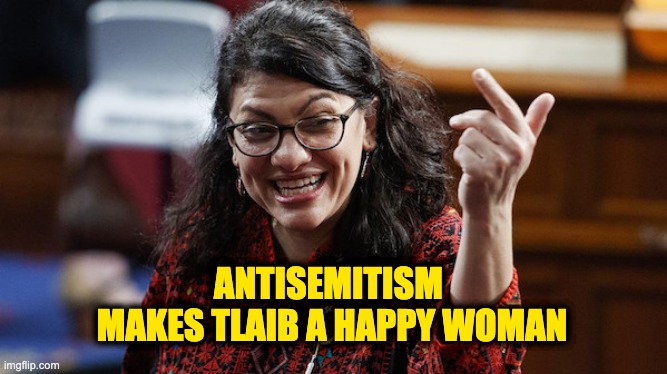 Freshman Rep. Rashida Tlaib (D-MI) is one of the people whose name is being floated as a pick for a possible Biden HUD Secretary. Tlaib would fit right in with Biden’s band of anti-Israel and anti-Semitic advocates. Rep. Tlaib possible HUD secretary

Tlaib is a supporter of the anti-Semitic BDS movement whose past stunts have included relabeling a map of the Middle East in her congressional office to read “Palestine” in place of “Israel,” supporting PYM, a group accused of underwriting terrorism, chose a terrorist-supporting group to organize her trip to Israel (which was canceled by Israel because of her BDS support), refuses to admit that Jews deserve a state, and blamed Israeli Jews for Palestinian terror attacks on Israeli Jews, Other manifestations of Tlaib’s overt hatred of anything Jewish, have included acknowledging that thinking of the Holocaust provides her a “calming feeling” and accusing pro-Israel advocates of having dual loyalty.

Tlaib retweeted an image celebrating “International Day of Solidarity with the Palestinian People,”  which is what the UN calls the anniversary of the 1947 General Assembly vote approving the partition plan, which was accepted by the Palestinian Jews but not the Arabs.  Tlaib’s image included the caption, “From the river to the sea, Palestine will be free.” StopAntiSemitism.org noted that the commonly used phrase is “code for eradicating the State of Israel and its millions of Jews.”

Tlaib reportedly undid the retweet, but others had already screen-captured it.

Rashida Tlaib RT’s out the same message that got Marc Lamont Hill canned from CNN.

From the River to the Sea, Palestine will be Free – code for eradicating the State of Israel and its millions of Jews.

Reminder – this is a sitting U.S. Congresswoman pic.twitter.com/zEWOptrGPW

The very same message shared by the sitting United States congresswoman and possible Biden HUD director cost a CNN contributor his job just a little over two years ago. Marc Lamont Hill was fired by CNN after making similar comments at a United Nations event commemorating the International Day of Solidarity with the Palestinian People. He also remarked that Palestine was the victim of “state violence and ethnic cleansing.” He urged the body “to commit to political action, grass-roots action, local action, and international action that will give us what justice requires and that is a free Palestine from the river to the sea.”

CNN's Marc Lamont Hill appears to call for violence against Israel and for the elimination of Israel, says, "Justice requires a free Palestine from the river to the sea."

The phrase "from the river to the sea" is a phrase used by those who believe Israel should be eliminated. pic.twitter.com/26TL205Ylb

Per the Detroit News, progressive groups are pushing Biden to name Tlaib as secretary of HUD:

Tlaib, a Detroit Democrat, is among the names pushed for Biden’s cabinet by two progressive groups — the Justice Democrats and the Sunrise Movement, which advocates for action to stop the climate crisis.

The groups have started a petition listing Tlaib as their top pick to lead the Department of Housing and Urban Development under Biden.

Meanwhile, some are calling on Tlaib to apologize for her “Palestine will be free” retweet. “Congresswoman Tlaib should apologize for her latest anti-semitic tweet calling for the eradication of Israel,” said Tori Sachs, executive director of Michigan Rising Action. “Her hateful, inflammatory rhetoric has no place in our public discourse – especially coming from an elected official like herself.”

Neither Ms. Sachs nor anyone else should hold their breath waiting for an apology. Anti-Semitism is protected in the Democratic Party and all too common on the Biden team.