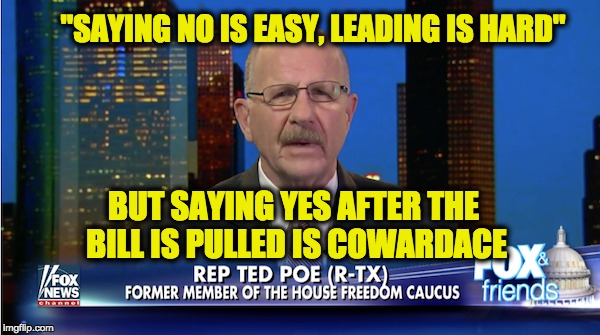 Whether or not one believes that last week’s Republican healthcare bill should have gotten enough votes to pass the house, it’s hard to argue with one point. Congressman Ted Poe (R-Tx) is a coward.   Over the weekend he made big news resigning from the Freedom Caucus, adding that the caucus should have supported the health care bill, an easy thing for him to do once the bill has already failed.

On Sunday Rep Poe released a statement that said in part:

“In order to deliver on the conservative agenda we have promised the American people for eight years, we must come together to find solutions to move this country forward. Saying no is easy, leading is hard, but that is what we were elected to do. Leaving this caucus will allow me to be a more effective member of Congress and advocate for the people of Texas. It is time to lead.”

I would revise what Rep Poe said, what he really meant was, Saying no is easy, leading is hard, but saying yes after a bill is pulled is the easiest.

The interesting part is that Poe seemed to support the legislation in early March but remained on the fence:

I have read the American Health Care Act and will continue to evaluate the legislation as it moves through the committee process: it will be voted on by the Ways and Means and Energy and Commerce Committees. I hope that during this process, certain provisions will be added to a final healthcare package, like allowing people to buy insurance across state lines for example. However, I am pleased that this bill follows through on the promise to repeal and replace Obamacare—because Obamacare is a failure and not sustainable. This bill provides a clear path for a smooth transition back to a patient centered system, ensuring that the rug is not pulled out from under anyone. It protects patients with pre-existing conditions and ensures that young Americans can remain on their parents plans. Most importantly, it provides more affordable choices for the American people and returns control over their healthcare back to them.

But until Sunday…two days AFTER the bill was passed did he say he supported the legislation,

If Poe took a stand by making his statment before the bill was pulled on Friday afternoon, he might have influenced others to support the legislation, that would have been leadership. If Poe really thought the Freedom Caucus should have voted for the bill he should have resigned before the bill was pulled. Instead he decided to attack the actions of the caucus after they were able to kill the bill. Kind of like a rat deserting a sinking ship.

Sorry Ted you are a coward!

Ted Poe was on Fox & Friends Monday morning to explain why he left the freedom caucus, he didn’t mention why he waited so long.  A video of that interview is embedded below: