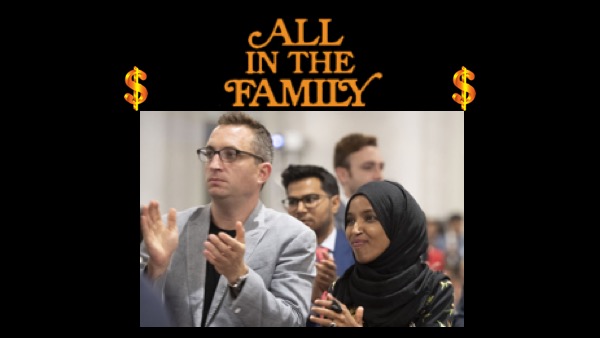 The song says, “Love is a many splendid thing,” but it also can be profitable at least in the case of Congresswoman Ilhan Oma As the rest of the country was hunkering down because of the COVID Pandemic, Rep Ilhan Omar (D-MN) married the guy she denied having an affair with Tim Mynett. The happy groom is a partner in the political consulting firm she uses, the E Street Group. In August 2019, we reported that Rep. Omar was having an affair with Mynett, a partner at E Street Group. E Street bills itself as providing national progressive strategies for candidates. Omar’s reelection campaign decided to keep their funds in the family as new hubby’s firm, E Street, was paid big bucks (nearly $2.8 million) to help with her reelection. rep. omar paid husband’s firm

Per Open Secrets, Omar’s campaign paid Mynett’s firm a total of $2,780,352 during the 2020 election cycle, representing 53.4% of her total spending. By the way, these totals are current through mid-October, so the family funding might end up higher.

Fox broke down the spending further:

Federal Election Commission data shows that Omar’s campaign sent $1.6 million to E Street Group LLC, which is owned by her husband Tim Mynett, from the start of 2019 through Jul. 22, 2020. After that, she reported an additional $1.1 million in the third quarter and $27,000 in the following weeks. That $1.1 million constituted nearly 70% of the $1.6 million that Omar’s campaign spent that quarter.

The expenses covered a range of services, including cable advertising, “digital consulting,” video production and editing.

Perhaps it also covers doing the dishes and taking the garbage out.

My relationship with Tim began long after this work started.

We consulted with a top FEC campaign attorney to ensure there were no possible legal issues with our relationship. We were told this is not uncommon and that no, there weren’t.

The NY Post explains that the payments are legal, but perhaps immoral:

The FEC allows lawmakers to hire family members or spouses to work on their campaigns, but a political ethics expert said the practice creates suspicion and should be banned.

“It should not be allowed,” said attorney Richard W. Painter, who served as chief ethics lawyer in the George W. Bush White House, told The Post in July. “I think it’s a horrible idea to allow it, given the amount of money that goes into these campaigns from special interests.”

On the bright side, new hubby Tim Mynett is not related to Omar. One of her previous spouses is suspected of being her brother.