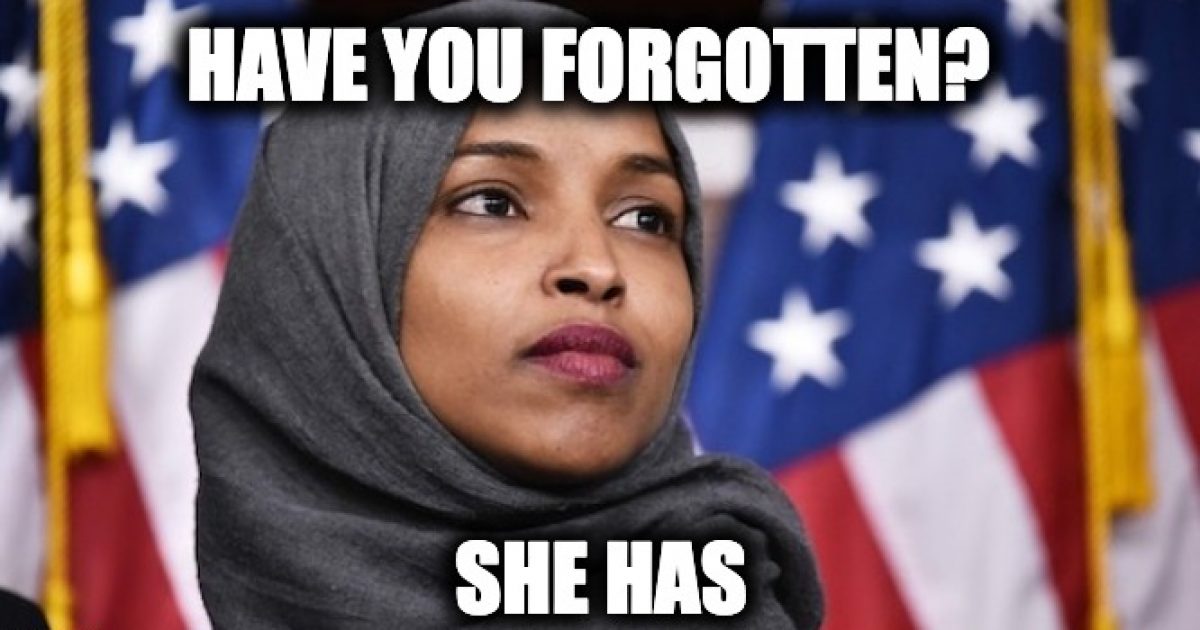 It was a day of horrible pain. The terrorist attacks on September 11th, 2001 are still scorched into the memories and hearts of most Americans who lived through that dreadful day. All of a sudden the United States of America, the most powerful nation on Earth, the shining city upon a hill, seemed vulnerable.

Considering her disrespectful description of that day,  Rep. Ilhan Omar (D-Minn) doesn’t seem to feel the pain of most other Americans feel about 9/11/01.

“CAIR was founded after 9/11 because they recognized that some people did something and that all of us were starting to lose access to our civil liberties.”

“Some people did something?” That “some people” were mentally twisted radical Islamists and that “something” was flying airliners into the side of the Pentagon and the twin towers of the World Trade Center, killing almost 3000 people and injuring 6,000 others in the deadliest attack on American soil.

It was so much more than “some people did something ” On that day of evil, I was leaving my office, which was less than two miles from the now smoldering ruins of the towers one could taste the air. Breathing felt strange. The air had a texture— feeling like particles of glass or sand were mixed in with the oxygen. The air tasted almost like burning rubber. And there seemed to be a black curtain blocking the view of downtown Manhattan.

Minnesota Democratic Rep. Ilhan Omar described the September 11, 2001, terror attacks on the United States in a nonspecific way during a recent speech to the Council on American-Islamic Relations (CAIR).

Omar delivered the keynote speech at a fundraiser for CAIR in late March and urged Muslim Americans to “raise hell” and “make people uncomfortable.” In one part of her speech that surfaced on Twitter this week, Omar described the 9/11 attacks in a peculiar way.

“CAIR was founded after 9/11 because they recognized that some people did something, and that all of us were starting to lose access to our civil liberties,” Omar said.

It’s hard to understand the Left’s protection of Minnesota Democratic Rep. Ilhan Omar. Nancy Pelosi needs to remove her from The Foreign Relations Committee. “Raise hell?” “Make people uncomfortable?”. We are being conditioned that any criticism of Omar is racist.

As you may have expected, the reaction on Twitter to Rep. Omar’s statement was not pleasant. Starting with her House colleague Rep. Dan Crenshaw (R-TX).

Yes, go on, what people? And what did they do? Unbelievable that 9/11 = “some people did something” meanwhile enforcing domestic immigration laws = “nazi concentration camps”

WTH is happening to our country???

Minnesota get rid of this garbage.

Democrats! The Party of HATE!

This is how they normalize these catastrophic events. This way they can justify eliminating those that don’t agree with their views. She is a true racist that needs to be removed from office.

If she doesn’t offend every one in America that lived through that day. Those actually affected by it. Those of us that lived it because of the love of our country and countrymen. Something is really wrong.