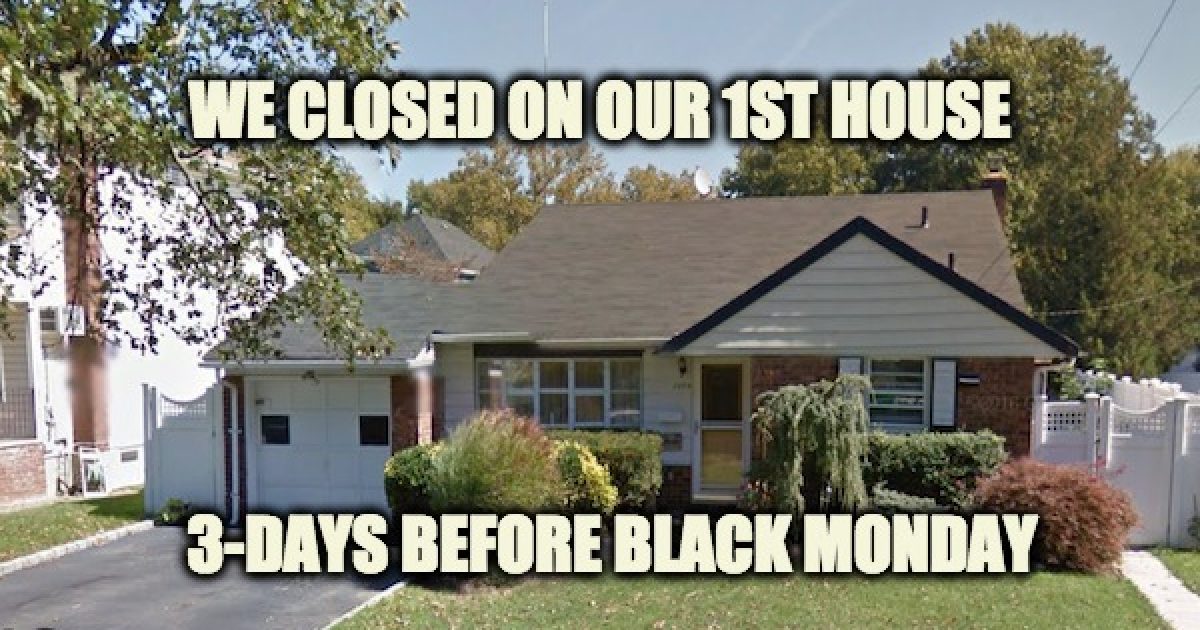 Thirty years ago yesterday, the stock market had its largest one day drop in value in history. Called Black Monday it happened on Monday, October 19, 1987. Stock markets around the world crashed, shedding a huge value in a very short time. The crash began in Hong Kong and spread west to Europe, hitting the United States after other markets had already declined by a significant margin. The Dow Jones Industrial Average (DJIA) fell exactly 508 points to 1,738.74 (22.61%). The question isn’t will it happen again, but when will it happen again.

Black Monday affected my wife and me on a personal level. Three days earlier on October 16, we closed on our first house (we’ve moved a few times since). We were married less than a year and even though we didn’t have much money in the market were sure there was going to be a depression and we would lose the house we just moved into.

But thankfully, the 1987 stock market crash was relatively minor in the way it affected the economy. Rather than ushering in an economic depression, the stock market quickly recovered and we didn’t lose the house.

It is usually assumed that the crash is the bad thing and for many it is, but depending on how it’s handled the crash can be short-term. However, the real cause of a market crash is a massive bubble in the stock market–and the crash is simply a market correction to that bubble.

The American Economy recovered from the 1987 crash relatively quickly thanks to the policies of President Reagan in fact it didn’t even cause an immediate recession. On the other hand the crash of 2008  and accompanying recession had one of the slowest recoveries in history thanks to the policies of Barack Obama. But eventually the economy will rebound, in the case of the great recession it took a change in presidencies.

On the 30th anniversary of the 1987 stock market crash, U.S. stocks are at a record high and investors are concerned that steep valuations may mean a correction is overdue, despite healthy corporate earnings and economic growth.

But could a repeat of “Black Monday” happen today? Modern trading technology, changes to the way stock exchanges operate and in the way investor funds are managed should make a repeat of the 1987 crash unlikely. Yet cautious traders refuse to rule it out.

“We have learned a lot from the mistakes of the past in terms of the reaction or over reaction,” said Ken Polcari, director of the NYSE floor division at O’Neil Securities in New York.

A decline of up to 20 percent in one day is possible today, but it would likely be a more orderly process, said Art Hogan, chief market strategist at Wunderlich Securities in New York.

“We have the ability to shut things down for a period of time and reassess and try to ascertain what is the best way to get back in business and take a calmer look at things,” he said.

Last October as we neared the election, Paul Krugman liberal economist, columnist for The New York Times, and former winner of the Nobel Memorial in Economics predicted the market would crash if Donald Trump won the election. Entrepreneur and Hillary supporter Marc Cuban said the same thing.

This is what happened to the Dow Jones since the day before the election.

Will we ever have another black Monday-type day in the stock market? Absolutely!  Will the experts be able to predict what will set off the crash? Probably not.

But the real lesson to learn from black Monday is that sooner or later, the American Economy will recover.