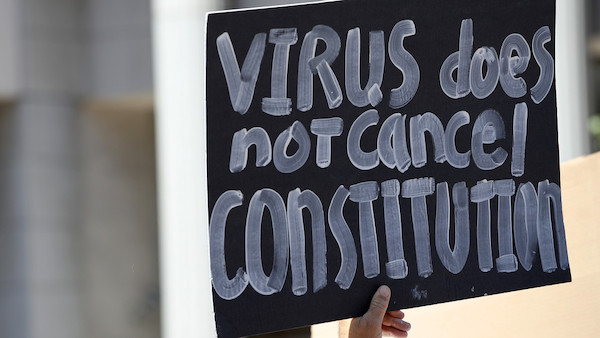 Cuomo and De Blasio have wasted no opportunities taking shots at anyone gathering together for public worship since the rise of the virus. SCOTUS has finally put a curb on that power-grab. religious freedom wins

But in a 5-4 decision, John Roberts didn’t even pretend to be constitutionalist in that one. As he has since he took over as Chief Justice, Roberts sided with the liberal judges who were ignoring the First Amendment.

In a 5-4 vote, the court ruled that the state’s congregational cap violated rights to religious freedom.

In an unsigned order, it said the rules “single[d] out houses of worship for especially harsh treatment.”

This was one of the first consequential rulings since conservative Justice Amy Coney Barrett was appointed.

Justice Barrett voted in the majority, along with other Trump appointees Neil Gorsuch and Brett Kavanaugh.

…But the Supreme Court’s unsigned majority ruled that “even in a pandemic, the Constitution cannot be put away and forgotten. The restrictions at issue here… strike at the very heart of the First Amendment’s guarantee of religious liberty.”

The court’s action will not have an immediate impact since the groups that sued are no longer subject to the restrictions they fought against.

The court found that the Governor’s definition of “essential” businesses discriminated against religion.

At the same time, the Governor has chosen to impose no capacity restrictions on certain businesses he considers “essential.” And it turns out the businesses the Governor considers essential include hardware stores, acupuncturists, and liquor stores. Bicycle repair shops, certain signage companies, accountants, lawyers, and insurance agents are all essential too. So, at least according to the Governor, it may be unsafe to go to church, but it is always fine to pick up another bottle of wine, shop for a new bike, or spend the afternoon exploring your distal points and meridians. Who knew public health would so perfectly align with secular convenience? As almost everyone on the Court today recognizes, squaring the Governor’s edicts with our traditional First Amendment rules is no easy task. People may gather inside for extended periods in bus stations and airports, in laundromats and banks, in hardware stores and liquor shops. No apparent reason exists why people may not gather, subject to identical restrictions, in churches or synagogues, especially when religious institutions have made plain that they stand ready, able, and willing to follow all the safety precautions required of “essential” businesses and perhaps more besides. The only explanation for treating religious places differently seems to be a judgment that what happens there just isn’t as “essential” as what happens in secular spaces. Indeed, the Governor is remarkably frank about this: In his judgment laundry and liquor, travel and tools, are all “essential” while traditional religious exercises are not. That is exactly the kind of discrimination the First Amendment forbids.

The opinion published by the SCOTUS also argued that the case wasn’t moot because Cuomo can change the classification of the zones where the religious institutions are located:

It is clear that this matter is not moot. See Federal Election Comm’n v. Wisconsin Right to Life, Inc., 551 U. S. 449, 462 (2007); Friends of the Earth, Inc. v. Laidlaw Environmental Services (TOC), Inc., 528 U. S. 167, 189 (2000). And injunctive relief is still called for because the applicants remain under a constant threat that the area in question will be reclassified as red or orange. See, e.g., Susan B. Anthony List v. Driehaus, 573 U. S. 149, 158 (2014). The Governor regularly changes the classification of particular areas without prior notice.3 If that occurs again, the reclassification will almost certainly bar individuals in the affected area from attending services before judicial relief can be obtained. At most Catholic churches, Mass is celebrated daily, and “Orthodox Jews pray in [Agudath Israel’s] synagogues every day.” Application in No. 20A90, at 4. Moreover, if reclassification occurs late in a week, as has happened in the past, there may not be time for applicants to seek and obtain relief from this Court before another Sabbath passes. Thirteen days have gone by since the Diocese filed its application, and Agudath Israel’s application was filed over a week ago. While we could presumably act more swiftly in the future, there is no guarantee that we could provide relief before another weekend passes. The applicants have made the showing needed to obtain relief, and there is no reason why they should bear the risk of suffering further irreparable harm in the event of another reclassification.

How big a deal is this decision:

Earlier this year, the court (with Ruth Bader Ginsburg still sitting) ruled AGAINST a church in California in a similar case.

If you were wondering why they are so hellbent on packing the court, this is why.

Suddenly the hard edge of the political left can no longer rely on the rulings of a complicit court to do their heavy lifting of cultural terraforming FOR them.