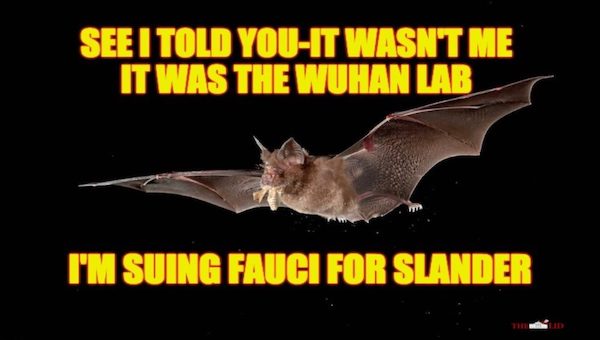 The lab in Wuhan was intending to conduct dangerous “gain of function” research AND they applied for U.S. funding for it.

So says a new bombshell report from DRASTIC– Decentralized Radical Autonomous Search Team Investigating COVID-19 — a group of scientists and researchers who are independently investigating the origin of SARS-CoV-2. They call themselves a “Twitter Detective Team” trying to solve the “riddle” of the pandemic’s origin.

A whistleblower came forward to DRASTIC about a 2018 grant proposal filed with Defense Advanced Research Projects Agency (DARPA) that was rejected for full funding. The documents show that Peter Daszak’s EcoHealth Alliance working with the Wuhan Institute of Virology “attempted to carry out advanced and dangerous human pathogenicity Bat Coronavirus research that would clearly qualify as Gain of Function (GoF).”

DRASTIC says that a whistleblower leaked the proposal to them, and the Telegraph confirmed its authenticity with a former member of the Trump administration.

The EHA / WIV proposal (named ‘DEFUSE’) was ultimately rejected for full funding (but leaving open the door for partial funding), in part because it mis-interpreted the GOF guidelines.

In other words, a branch of the federal government had already judged aspects of EHA’s research, and the corresponding shared research plan with the WIV, as falling under the definition of GOF, only for HHS to approve similar work without P3CO review in 2018 and 2019.

The Wuhan Institute of Virology was conducting some pretty dangerous research. Just recently, ClashDaily reported that they were manipulating viruses in the lab to make them stronger.

Here is Peter Daszak in February 2016 talking about how his “colleagues in China” are sequencing Coronavirus spike proteins.

But there’s even more to it than that. In the trove of documents, it appears that scientists from the Wuhan lab wanted to release some of those genetically manipulated spike proteins through the air into bat caves 1,100 miles away.

Chinese scientists wanted to genetically engineer coronaviruses that were more infectious to humans and then conduct experiments on live bats about 18 months before the first COVID-19 cases emerged — but a US Department of Defence agency rejected the funding proposal, leaked documents reveal.

Scientists at the Wuhan Institute of Virology were planning to genetically enhance airborne coronaviruses and release aerosols containing “novel chimeric spike proteins” among cave bats in Yunnan, China, according to the 2018 proposal submitted to the Defense Advanced Research Projects Agency (DARPA).

The purpose of the research was to assess the risk of coronaviruses, work on ways to prevent outbreaks and even vaccinate bats against the virus, according to the proposal.

This raises a whole lot of questions, doesn’t it?

DRASTIC is now posing the question — was this dangerous gain of function research given partial funding from the U.S. or from another source and was it carried out?

It’s a critical question now that scientists have admitted that the Lab Leak origin is plausible.

“Given that we find in this proposal a discussion of the planned introduction of human-specific cleavage sites, a review by the wider scientific community of the plausibility of artificial insertion is warranted,” said Drastic.

This bombshell comes hot-on-the heels of a report by The Intercept earlier this month detailing National Institute of Allergy and Infectious Diseases (NIAID) funding provided to EcoHealth Alliance for research on bat coronaviruses at the Wuhan Institute of Virology.

The Intercept reports that after digging through 900 pages of documents, they found that the NIH had awarded two grants to EcoHealth Alliance to study coronaviruses in bats.

One proposal titled, “Understanding the Risk of Bat Coronavirus Emergence,” was approved for $3.1 million of funding for a 5-year period between 2014-2019. The study involved screening thousands of bat samples, as well as people who worked with live animals, for novel coronaviruses. The grant included $599,000 going to the Wuhan Institute of Virology and used in part to identify and alter bat coronaviruses likely to infect humans.

It looks like Saint Anthony Fauci of the (NIAID) hasn’t been telling the complete truth on the NIH’s role in this dangerous research.

The absolute hubris of this group of scientists that think they can fiddle around and play God with deadly viruses for “research” needs to stop.

Unfortunately, it seems like they haven’t learned a damned thing.

As Jon Stewart said, he thinks that one day, science will kill us all.

Show me where they’re wrong.