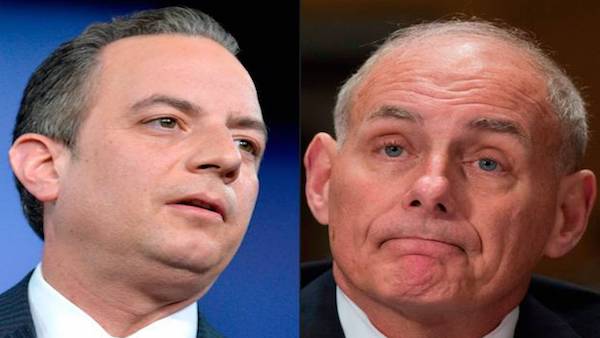 On Friday afternoon as Airforce One arrived back at Andrews Air Force Base President Trump announced (via twitter) that Chief of Staff (COS) Reince Priebus, was gone and he was going to be replaced by DHS Secretary General John Kelly.

Priebus took the Airplane trip to Long Island with the president and upon landing (before the press got the word) Priebus, Steven Miller, and Dan Scavino loaded into one suburban but moments later Miller and Scavino got out and loaded another van.

As word spread about Priebus’ resignation, some reporters got up close to Priebus’ car, taking cell photos and such. Priebus’ car then pulled aside, out of the POTUS motorcade and traveled on its own. When President Trump left the plane and walked to his car:

Fox reported that Priebus resigned on Thursday and it wasn’t announced until the POTUS could talk to General Kelly.
Since yesterday there have been growing tensions between Reince and new communications director Anthony Scaramucci who accused Priebus of leaking his financial disclosure information to the press then launched into a profanity-filled tirade against Priebus. Sometime during that drama-filled day, Reince quietly resigned.

It is not surprising that the President lost confidence in the former RNC Chairman. The job of the Chief of Staff is to control all the personnel underneath the President and V.P. The COS oversees the actions of the White House staff, manages the president’s schedule, and decides who is allowed to meet with the president. The COS needs to be a strong SOB to control the staff and while he is a good manager, and a great guy, Reince who turned around the RNC from bankruptcy did not seem able to exhibit the same sort of control at the White House.

For weeks the stories coming out of the White House has centered on a staff in disarray, as the man in charge Reince Priebus had to go.

General John F. Kelly, the retired Marine four-star general serving as secretary of homeland security should make an excellent Chief of Staff. He will be able to control the staff, including leaks. And he did get some political experience when he worked at the Defense Dept.

Kelly starts his new job on Monday, it will be interesting to see how the tenor of the White House changes.

It has been one of the greatest honors of my life to serve this President and our country.  I want to thank the President for giving me this very special opportunity.  I will continue to serve as a strong supporter of the President’s agenda and policies.  I can’t think of a better person than General John Kelly to succeed me and I wish him God’s blessings and great success.